Home   And Just in CASE   Wisdom under the lino: Making sense of life
Apologetics theology wisdom

Wisdom under the lino: Making sense of life 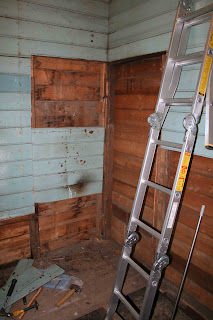 I had the joy of demolishing an old bathroom recently in a 110 year-old house (seriously). As I removed the fixtures, peeled layers of masonite and wood from the walls, dismantled built-in cupboards and lifted several generations of linoleum (vinyl) from the wooden floor, the room revealed its secrets. The remains of two earlier internal doorways dating from the 1890s, buckled paint from an over-stoked wood chip water heater (a chip-heater) from the early 1900s, the original paintwork long covered by a second layer of wood panelling. But best of all were some fragments of newspaper; remnants of the ‘underlay’ for perhaps the 2nd or 3rd floor covering dating from the 1950s. A half dozen pages still hidden under the 1950s linen press.

I leafed through the fragments of the old Sydney Morning Herald dated 15th November 1950. I read with fascination of an estimated 200,000 people flocking to Sydney’s beaches to escape the warm weather. The finance section reported record profits for G.J. Coles and encouraging figures for the new Luna Park. Sydney Ferries was in a spot of bother with reduced profits, a capital reduction strategy and plans to hold onto ferries for 8-10 years longer, and (of course) disappointed investors. General MacArthur in his second report on the war in Korea had been appealing to the UN Security Council members to send more ground forces. Column Eight started with a piece about some “New Australians” who had taken an Aussie phrase from their new language too literally and so on.

By the time I had picked up the top third of page 4 (all that remained of it), I started to wonder if this really was a 1950s edition of the SMH. The three stories on this fragment of a page featured: 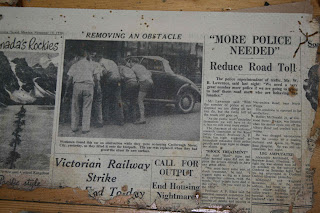 As I bashed away with hammer and chisel I mused over the minimal change in the issues concerning people and the daily life being experienced in Sydney. I was reminded of Ecclesiastes (1:2-11) when the Preacher (or Teacher) opens his book with the words:

Vanity of vanities, says the Preacher, vanity of vanities! All is vanity.
What does man gain by all the toil at which he toils under the sun?
A generation goes, and a generation comes, but the earth remains forever.
The sun rises, and the sun goes down, and hastens to the place where it rises.
The wind blows to the south and goes around to the north; around and around goes the wind, and on its circuits the wind returns.
All streams run to the sea, but the sea is not full; to the place where the streams flow, there they flow again.
All things are full of weariness; a man cannot utter it;
the eye is not satisfied with seeing,
nor the ear filled with hearing.
What has been is what will be,
and what has been done is what will be done,
and there is nothing new under the sun.
Is there a thing of which it is said, "See, this is new"?
It has been already in the ages before us.
There is no remembrance of former things,
nor will there be any remembrance of later things yet to be among those who come after.

I the Preacher have been king over Israel in Jerusalem. And I applied my heart to seek and to search out by wisdom all that is done under heaven. It is an unhappy business that God has given to the children of man to be busy with. I have seen everything that is done under the sun, and behold, all is vanity and a striving after wind.

What is crooked cannot be made straight,
and what is lacking cannot be counted.

I said in my heart, "I have acquired great wisdom, surpassing all who were over Jerusalem before me, and my heart has had great experience of wisdom and knowledge." And I applied my heart to know wisdom and to know madness and folly. I perceived that this also is but a striving after wind.

For in much wisdom is much vexation,
and he who increases knowledge increases sorrow.

Ecclesiastes is a much misunderstood book, some see the words of the writer as negative, cynical and depressing, but nothing could be further from the central truth of this short work. While it is disjointed, a bit obscure in language and confusing at first reading, there is wisdom in it that would take many Blog posts to discuss. This is a major apologetic work, as relevant today as it was over 2,000 years ago. The opening verses address my reflections on the newspaper clippings.

The Preacher opens his book by inviting the reader to reflect on the ‘Ground Hog Day’ repetitiveness of life; the sense that all of us can have at times, that our life has the same patterns of work-sleep, happiness-sorrow, birth-death and so on. “Vanity of vanities, says the Preacher, vanity of vanities! All is vanity”. The writer is conscious of the vanity and corruption to which creation is subject (Rom 8:20ff) and begins his book by emphasising the curse on creation that is a consequence of sin and the Fall in the Garden of Eden (Gen 3:17-19).

While some readers find Ecclesiastes too negative, this is the writer’s device to bring one’s attention back from seeing this world and our life in it as ends in themselves. The alternative, the key, he hides from the reader for much of the book, but he provides hints alomg the way, almost teasing the reader as he works towards what he sees as the key. The Preacher doesn’t deny that the world can have its own happiness (see for example Ecclesiastes 2:24; 3:12; 3:22; 5:18; 9:7; 11:9); but the ‘real’ significance he suggests, is that in this at times confusing world God’s goodness, wisdom and righteousness is revealed. It is in this life that God’s plan of salvation in Christ is made known.

So while a bunch of old newspaper clippings might have lead me to reflect on the unchanging patterns of life and the world, there is a way to make sense of the seeming vanity and meaninglessness of life. While there is “nothing new under the sun” (1:9b), the world must be understood as being from the hand of God (2:24; 5:18-20). This is a message about faith when confronted by the confusion and sometimes pain, of life. He suggests that our life is to be led by faith not in our own strength, cunning, skill and hard work - a lesson I continue to learn!

The Preacher reminds us that life is brief and is to be lived in humility and trust in God.

“Remember also your Creator in the days of your youth, before the evil days come and the years draw near of which you will say, "I have no pleasure in them” (Eccl. 12:1).

The Preacher ends with:

“The end of the matter; all has been heard. Fear God and keep his commandments, for this is the whole duty of man. For God will bring every deed into judgment, with every secret thing, whether good or evil” (Eccl. 12:13-14).

There will be judgment one day, but all will be well with those who trust God, and who seek the forgiveness, for as Peter outlined in his first letter to the exiles scattered across the world:

“Blessed be the God and Father of our Lord Jesus Christ! According to his great mercy, he has caused us to be born again to a living hope through the resurrection of Jesus Christ from the dead, to an inheritance that is imperishable, undefiled, and unfading, kept in heaven for you, 5who by God’s power are being guarded through faith for a salvation ready to be revealed in the last time” (1 Peter 1:3-5). 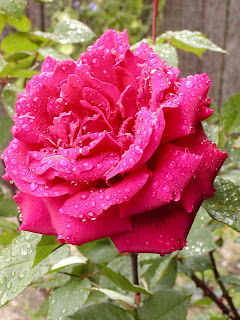