Was Bill Henson caught out by postmodernism? 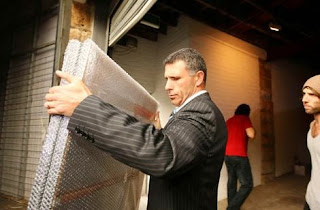 In Australia we have just had a major controversy caused by an art exhibition featuring the photographic work of Bill Henson. Henson is a one of our most famous living artists and has gained widespread international acclaim. However, last week the police were called to a gallery where his latest exhibition was to be opened. For non-Australians who read this blog the key details are: Henson has for a long time included photographs of young pubescent children. In his own words he likes to express "..ideas about humanity and vulnerability and our sense of ourselves living inside our bodies and our bodies in space" and has been interested in the transition from childhood to adulthood (amongst other things).

What triggered the confrontation with police was the use of a photograph of a naked 13 year old girl on the invitation to the exhibition opening and the use of some images of the same girl on the gallery's website. Hetty Johnston an activist for Braveheart (an organization fighting against child pornography) contacted the police, the exhibition was shut down, the art removed from the gallery by police and the images removed from the website. The police are still investigating and are expected to lay charges against the artist and gallery.

I haven't written this post to comment on the work itself and have never seen it except via the media in the last week. Nor am I trying to make judgements about the artist or his motives. However, it appears that about one third of the images in the exhibition featured photographs of a young teenage boy and girl in varied poses including one of the girl fully naked with exposed genitals. If this is true then I think that there is good reason for concern.

But for me, what is intriguing about this confrontation has been the way various individuals and groups have responded. For some his work is viewed as pornography while for others it is seen as high art exploring issues that are important. Edmund Capon, Director of the Art Gallery of NSW has described his art this way:

"Henson's images are veritable symphonies of decadence and beauty, of squalor and opulence, of mysterious darkness and ominous light, of quiet obsession and subversive ecstasy."

The Prime Minister described some of the images this way:

"Whatever the artistic view of the merits of that sort of stuff - frankly I don't think there are any - just allow kids to be kids."

"You can call it anything you want, but at the end of the day, these are images of naked adolescents."

Judy Annear (Senior Curator at the Art gallery of NSW) in defended Henson's work in the Sydney Morning Herald but acknowledged that his 'edgy' work can cause some people to "take a step away" from it. She suggested that:

"In the end it's only a representation. We're not being asked to agree or approve."

Postmodernism asserts that meaning or interpretation varies with the individual, circumstances and time. You can almost hear the postmodern art critic saying ‘the art might be offensive to you, but not for me’. In Annear's words, "it's only an interpretation". Postmodernism shifts the focus from the artist and the work to the viewer and his or her context. In a sense postmodernists would claim that we don’t go to a gallery to discover what an artist has depicted representationally, but rather to experience the artwork and to discover for yourself just what it might mean. The meaning is seen as in the knower not the work, and all such meanings or interpretations are relative.

Of course, while supporters of postmodernism focus on the interpreter they also see others as influencing our meanings. While not commenting specifically about art, Stanley Fish suggests that it is in interpretive communities, rather than any work (whether text, art, film) that meaning and interpretations are produced. In considering the relationship between an interpreter (e.g. a gallery viewer), an interpretive community (e.g. art enthusiasts) and a source of knowledge or interpretation (e.g. photographic art), Fish sees the interpretive community as determinative. And here is the problem for Henson. While the relatively closed community of art critics might well see his work as a “veritable symphon(y) of decadence and beauty”, others outside this limited interpretive community might just see it as pornography and as photographs that are in breach of the law. Non-members of the art community have not been prepared to accept the deconstructionist view that there is no connection between the signifier (e.g. a photo) and the signified (e.g. a naked 13 year old girl). They have asked why was this young girl photographed this way? Is she old enough to give consent? What responsibility did her parents have in this? Could these images be exploited by others?

For many outside the art community, the photos are not a representation, they are a photo of a 'real' 13 year old girl. What’s more, they might assert that the very artistic devices used by Henson (e.g. subtle lighting, poses that appear sexual to many etc) signal that the artist might just intend for the viewer to see the art as concerned with teenage sexuality and hence object to the work on moral and legal grounds. Furthermore, they might just conclude that this is exploitation and perhaps even abuse of children.

I asked the question in the title to this post "Was Bill Henson caught out by postmodernism". The outrage by the arts community is unwarranted in my view. The defence of Henson that I've hard in the media has typically been based on three lines:

* he's one of our greatest artists;
* he's been doing this for 30 years;
* it's art and so should be viewed differently.

None of these arguments have convinced me of anything, nor have they negated the concerns raised by those outside the arts community. There seems to have been long-term acceptance of Henson's work within the arts community, but things went pear-shaped when the gallery did two things. First its used one of the images on the exhibition invitation and sent it outside the tight arts community. Second, it placed some of the images on the Internet opening the images up to the whole world. This permitted new interpretive communities to examine Henson's work and draw different conclusions to the arts community. And this highlights one of the problem with postmodernism, it promotes meaning and interpretation as relative, but its adherents often seem to want to place limits on interpretive possibilities when the viewpoint is at odds with their own.

You can read a Sydney Morning Herald article about the exhibition here.