He spoke with humility and compassion about the struggles that medical practitioners face every day due to advances in technology and science that open up choices not previously available. He also spoke graciously of the decisions ordinary people make in their daily lives as they deal with infertility, disability, degenerative illness, the risks of unplanned pregnancy, and foetal abnormalities and disease.

He structured the talk around explanation of two worldviews of the origin and nature of reality. The first, which he termed "Materialism" – one that sees reality as nothing but matter and energy and scientific laws governing how they interact (The Dawkins view of reality). Creation for the person holding this worldview only has a physical reality with no underlying purpose; human beings are seen as the result of a series of improbable and random events. A view he referred to as “the faith of the enlightenment” with its followers people who are on a quest for freedom from the restraints of nature. 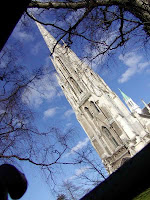 The second worldview, a Christian understanding of reality, sees the cosmos as founded in the intentions of a Creator. Creation is no accident; there is a plan. All that we see unfolding before us is oriented towards the future plans of God. God has created the physical stuff that is easy to observe and the hidden moral order that is part of it. Humans are no accident; they are the creative work (no matter by what method) of God, made in his likeness and for his purposes. We are not self-explanatory; we derive our meaning from outside of ourselves – from God!

The second view of reality is based on the teachings of the Bible, and leads to a different view of personhood that should constrain our choices in accordance with God's loving purposes for us. Prof Wyatt argued that even when sin distorts the image of the creator in all of us, God works through our pain, our imperfections and the taking up of each other's burdens.

A different view of what it is to be human in turn leads to different hopes, aspirations and expectations for life and death.

For those in Sydney Prof Wyatt will present his second lecture at New College tomorrow evening at 7.30pm. The topic is “Bioethics and Redemption". Full details are on our website.


You can download all three talks in the series here

Professor Wyatt’s current position is as a clinical academic at the Regional Neonatal Intensive Care Unit at University College London Hospitals - an internationally recognised tertiary centre for the care of the newborn. He has supervised a range of research projects including the use of new methods of optical brain scanning in babies and research on pre-term and brain-injured infants. He also has a long-standing interest in philosophical, ethical and religious issues raised by advances in medical technology. His is author of the widely acclaimed book 'Matters of Life and Death'