Truth in the Midst of People's Confusions about Christmas 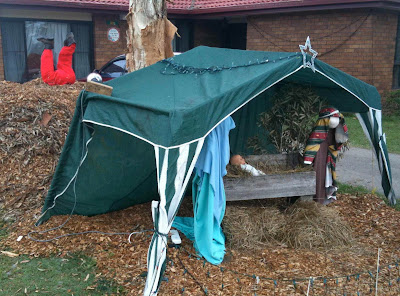 I was amused by the above nativity scene that I photographed on Saturday in someone's front yard. The message of Christmas is actually quite simple, but it's amazing how people manage to distort the central meaning with a vast array of misused symbolism. Some of it is very funny, some unhelpful, some offensive, and other attempts are simply confused. The family that created the above scene was no doubt having some fun with Santa and the garden mulch, as well as representing the birth of Christ in their own way. In the process they had inadvertently (I assume) communicated one of the key truths of Christmas. While Santa Claus is irrelevant to the biblical meaning of Christmas, the nativity scene uses remarkably appropriate symbolism; for John's Gospel tells us that in the coming of Jesus, it was if God came down to earth and pitched a tent in all of our front yards. John 1:10-18 describes what happened on that first Christmas.

10He was in the world, and the world was made through him, yet the world did not know him. 11He came to his own, and his own people did not receive him. 12But to all who did receive him, who believed in his name, he gave the right to become children of God, 13who were born, not of blood nor of the will of the flesh nor of the will of man, but of God.

14And the Word became flesh and dwelt among us, and we have seen his glory, glory as of the only Son from the Father, full of grace and truth. 15(John bore witness about him, and cried out, "This was he of whom I said, 'He who comes after me ranks before me, because he was before me.'") 16And from his fullness we have all received, grace upon grace. 17For the law was given through Moses; grace and truth came through Jesus Christ. 18 No one has ever seen God; the only God, who is at the Father’s side, he has made him known.

When John wrote that Jesus ('The Word') came and 'dwelt among us' in verse 14, the Greek from which this was translated, literally God “pitched his tent”. This was an allusion to how God dwelt among the Israelites in the tabernacle (see Exodus 25:8-9; 33:7). God's rescue plan for his rebellious people was to send his own Son into the world. The eternal and holy Son of God took on human nature and came to live amongst humanity. He came both as God and man at the same time, and in one person. While the tent in the front yard and the 'humble' representation might not match our sense of the wonder of God, in a strange way its simplicity speaks powerfully of what God did for us.

The Bible teaches that our response to God's amazing act in sending his Son into the world, is that we should acknowledge it, repent, and believe that Jesus was and is the saviour of the world.And that his death and resurrection (which we remember at Easter) is sufficient to remove the debt we owe God due to our sin and rebellion. If we do this, then we need not fear death, for God promises us eternal life as his adopted children.  As John's gospel reminds us:

My prayer is that readers of this blog might grasp something new this Christmas about the story of Christ. Whether you see yourself as a Christian or are simply curious about him, I pray that you might look afresh at the teachings of the Bible and see new truth in the simplicity of the message.

Rev John Smuts gave a great sermon titled 'The Wonder I Never Saw' on this passage at Petersham Baptist Church last Sunday.  You can listen to it HERE.