To Give a Reason 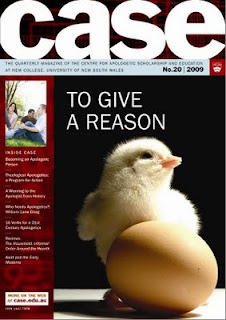 CASE has just released its latest issue of its quarterly magazine Case that focuses on approaches to apologetics. Some Christians see apologetics as an interesting, but non-essential tool. And yet all are exhorted in Scripture to always be ‘prepared to make a defence [apologia] to anyone who asks you for a reason for the hope that is in you’ (1 Peter 3:15). Peter’s exhortation to be prepared to ‘to give a reason’ — an apologia — forms the theme and the title for our 20th issue.

Apologetics has commonly been defined as ‘the defence of the Christian faith against charges of falsehood, inconsistency or credulity’ (Cowan, Steven, ‘Five Views on Apologetics’, 2000). Such a definition pushes us towards methods based on reason and argument. Paul’s defence before Roman officials (Acts 24-25) is one example of how this is done. Yet is there more to apologetics than rational discourse? Taken together, the writers in this issue of Case show how relational and rational apologetics ought to co-exist in the commending of the Christian gospel. While not denying the importance of knowledge it is important to underline that apologetics takes place between people sharing relationships—not least in the relationship we call church.

The essays in Case #20 offer a number of foundational principles that help us to rethink and clarify attitudes and approaches to apologetics. As I've edited the magazine with Mike Thompson my Associate Editor I have been challenged in many ways. Here are a few of the key ideas that have struck me as significant.

Apologetics is more than winning arguments

In offering a defence or reason for the hope that we have in Christ, we must do more than simply seek to win arguments; our lives must also commend Christ (see my previous post on this topic here). David Hohne frames his essay with Peter’s challenge (1 Peter 2:12) to live an honorable or good life. As David puts it, to have ‘a beautiful way of life’ that commends God to others. Our defence should not be just rational argument; we must use our ‘head, heart and hands’ and live as apologetic people in apologetic communities—with ‘our whole lives as both a defence and commendation of the grace of God in Christ’. The church is not separate from culture, and yet it should stand out against it.

Michael Jensen makes the point in his contribution to this issue that the church needs to build ‘communities of grace’ in which are demonstrated authentic Christian lives. Christ-centred communities draw attention to the one in whom members place their hope.

We must look for new ways to engage in apologetics

A common error with apologetics is to see it as just skills and tasks to be learned. Andrew Bain suggests that we must become better at connecting core elements of the Christian faith with related themes in the cultural world in which we dwell. We need to articulate, for the benefit of others, those points of ‘conflict and connection’ between Christian doctrines (e.g. the Trinity, revelation, Scripture, and Christology) and their apparent counterparts in our cultural and intellectual surroundings.

William Lane Craig points out that apologetics is not just for evangelising unbelievers and strengthening Christians. Apologetics also has a broader value in helping to create receptiveness towards Christianity in society more generally. As he argues, ‘It is the broader task of Christian apologetics to help create and sustain a cultural milieu in which the Gospel can be heard as an intellectually viable option for thinking men and women.

Richard Gibson and Mike Thompson suggest that when we translate the Christian faith into the language of our surrounding culture we must beware of reconstituting the message itself—in particular the Biblical portrayal of God’s character. Drawing on the example of the second century apologists they show how apologetic translation can become apologetic ‘transposition’—a problem not only for apologetics but for the long-term integrity of Christian theology as a whole.

Exercise humility as we present Christ

All writers in this issue either address or allude to the need for a more ‘humble apologetic’. Michael Jensen reminds us that we must prayerfully approach our task with the knowledge that God is sovereign in our apologetics. As well, he commends the apologist to listen attentively and intelligently, and be prepared to say ‘I don’t know’. Similarly, William Lane Craig commends us to be ‘relational, humble and invitational’. We must present the reasons for our hope ‘with gentleness and respect’ (1 Peter 3:15).

Seminar on Apologetics for readers based in Sydney

CASE holds a quarterly discussion group based on the previous issue. Our discussion group for October will be held at Moore Theological College on Thursday 29th October 2009 at 4.00pm in the Lower Lecture Room. Dr David Höhne, lecturer in Philosophy and Theology at Moore, will speak briefly about his article on ‘becoming apologetic persons’, in which he critiques the lingering influence of Kant and Schleiermacher, and challenges readers to re-conceive of apologetics not as a matter of rational discourse alone but instead as a matter of ‘head, heart and hands’.

Discussion will then be open on any of the contents of Case # 20. The related contents include:

Registration is open to all and a copy of the latest magazine will be provided as part of the seminar.