Home   And Just in CASE   The wonders of space: Seeing the creator in images of the universe
innovation natural theology Space

The wonders of space: Seeing the creator in images of the universe 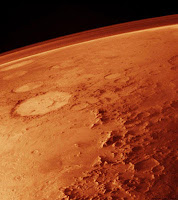 Praise him, sun and moon,
praise him, all you shining stars!
Praise him, you highest heavens,
and you waters above the heavens!

Let them praise the name of the LORD!
For he commanded and they were created.
And he established them forever and ever;
he gave a decree, and it shall not pass away.

I grew up as a child during the great US and Russian space race of the 1950s and 1960s. Like most young boys I was fascinated by it. I collected cards, cut out every clipping I could find in the papers, read everything I could find on space. There was no TV at first but by the early 1960s black and white TV brought space travel even more to life. Like almost everyone who had a TV I watched the first moon landing live on July 20th 1969. I was not a Christian but I still marvelled at the vastness and mystery of space and the human achievement.

For a young boy this was the age of cracker nights, home made cracker guns, serious skyrockets, and the challenge of contests to see who could blast a tin the highest using a tuppenny bunger. My fascination with space exploration had two dimensions. The technology achievement of blasting men into space in tiny capsules atop giant rockets seemed unbelievable. And the images of earth viewed from space for the first time and those of the relatively inconsequential moon that were viewed on cinema screens and black and white televisions sets were amazing.

In the intervening years since the US Apollo program ended, space exploration and travel has seemed much more boring (notwithstanding the great work of astronomers and the achievements of the Hubble Telescope etc). But the Mars probe has rekindled my interest and the images have inspired me in new ways. 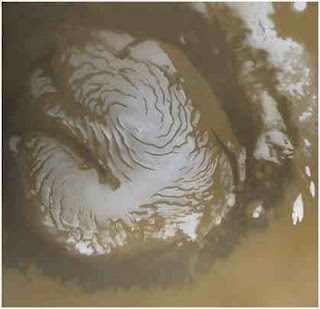 Residents at the university college I lead (New College, UNSW) were fortunate to have Dr Fred Watson as our guest at our end of session dinner recently. Dr Watson is Astronomer in Charge of the Anglo-Australian Observatory at Coonabarabran, where his main scientific interest is gathering information on very large numbers of stars and galaxies. He is the author of "Stargazer - the life and times of the telescope", and is a regular broadcaster on ABC radio. His new book "Why is Uranus upside down?" is based on listener questions, and was published in October 2007.

His address included a fascinating visual presentation of images primarily from Mars (it has obvious currency). His focus was the significance of the most recent Mars landing by NASA. The images he shared and thousands of others are available on the NASA website.

The landing on Mars by the NASA probe is another significant human achievement. The Mars Phoenix lander touched down in the far north of the Red Planet, after a 680 million-km (423 million-mile) journey from Earth. The probe is equipped with a robotic arm to dig for water-ice thought to be buried beneath the surface. It has already begun examining the site for evidence of the building blocks of life. There have been many attempts to explore Mars dating back to the 1970s, but the greatest successes have come in recent years. We now have three functioning pieces of equipment on the surface of Mars beaming signals back to Earth: the Spirit rover, the Opportunity rover, and the most recent is the Phoenix lander.

Dr Watson painted a vivid picture of the universe in all its majesty and wonder. He spoke of stars being formed and time spans of billions of years. The little boy in me was again captivated by the technology that sent the little landing vehicle to this distant planet and the wonder and enormity of space. The images of the Red planet captured my imagination. But while Dr Watson kept talking of the vastness of the Universe, the billions of years he believed that it had taken for the planet as we view it to be formed, I kept thinking of the creator who was responsible for all that we were viewing and the vastness that was still hidden from even the most powerful of telescopes. As amazing as the Mars landing is, in cosmic terms, it is barely a trip to the other side if the street, and the best of our images of the universe, collected by our most powerful telescopes, are little more than a view of the next set of hills.

As a Christian I believe that God has revealed himself through his word, that his plan for humanity is described in detail in the Bible and that this is revealed perfectly in the sending of his son Jesus Christ to die for us. But I also believe, as most of the great scientists did in the 17th Century, that God's creation also points to him and that science and religion don't have to be seen as in conflict. I'm grateful to astronomers who help me to understand the complexities of a universe that I believe God created. Their discoveries lead me to marvel at God and his work, not to doubt his existence. The latest edition of Case (a quarterly magazine that I Edit for CASE) has an interesting piece by Larissa Johnson titled "Redeeming Natural Theology" that argues that science and religion can co-exist and that science can be a useful apologetic.

As Dr Watson spoke, I kept wanting to shout Praise God! It is little wonder that astronomers marvel at the stars in the heavens and spend their lives seeking the secrets of the universe. I too marvel at it, for it declares the Glory of God.

The heavens declare the glory of God;
the skies proclaim the work of his hand

Day after day they pour forth speech;
night after night they display knowledge.

There is no speech or language
where their voice is not heard
(Psalm 19:1-3) 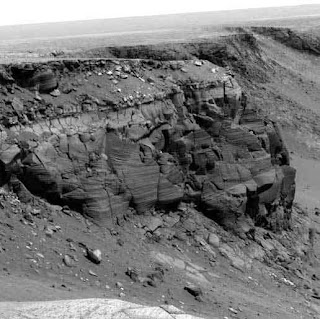 Above Image: The cliff in this image from Opportunity's panoramic camera (Pancam) is informally named Cape St Vincent. Scientists suggest that the rocks at Victoria Crater once represented a large dune field, not unlike the Sahara desert on Earth, and that this dune field migrated with an ancient wind flowing from the north to the south across the region. 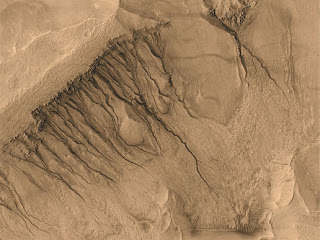 Image above: The image above is inside Newton Basin on Mars and shows numerous narrow channels run from the top down to the floor. Many scientists hypothesize that liquid groundwater can sometimes surface on Mars, erode gullies and channels, and pool at the bottom before freezing and evaporating [Photo Credit: Malin Space Science Systems, MGS, JPL, NASA]