The sexual paradox: Boys and girls are different

Journalist and psychologist Susan Pinker has written an interesting book, The Sexual Paradox, in which she argues that there are significant differences between men and women that are not simply cultural or the result of learned behaviour. Such differences she argues help us to explain some of the startling statistics about male and female behaviour. For example, in discussing biological variations across genders, she addresses differences in relation to risk-taking, and suggests we need to ask:

Why are 10 times more men in prison?
Why do 9 times more males die in accidents involving risk taking?
Why are there more women who are depressed but more male suicides?

Pinker suggests that it does neither gender any favours to pretend girls and boys, men and women are the same. She argues that the sexes are motivated differently and respond to competition quite differently. This shows itself in the ways boys and girls behave, young males take more risks and women adopt different views of the place of work in their lives.

When talking about women and work she points out (while acknowledging exceptions) that "when you ask women what they want from work, they place great emphasis on the quality of their relationships at work and on working with people, not things....An interest and an ability to contribute to a field are more powerful drivers for women, on average, than higher salaries, job security and benefits. Having a position of power is their lowest priority."

"There's an element of volition in women's choices that simply isn't being recognised," says Pinker.

Pinker's book is yet another example of secular research and writing mirroring biblical teaching and wisdom about the different but complementary roles of men and women. I've written in Case magazine about this topic (here).

Other resources to explore

You can read a review of the book here

You can also view a video of Susan Pinker being interviewed about her book.

I have written a number of previous posts in the area of gender differences: 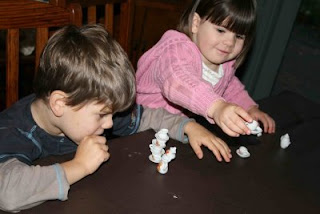 I've used the above photo in a previous post. My granddaughter Rebecca was playing with a miniature tea set.
Her brother Jacob joined in, but note the different way they play with the china.