The Reason for God 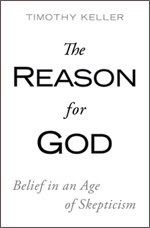 I wrote an earlier post on Tim Keller's book The Reason for God in January (here) just before its release in the USA. I've finally got around to reading it and offer a full review in this post.

Timothy Keller is the pastor of Redeemer Presbyterian Church in New York; the city that many see as one of the world's most cosmopolitan, pluralistic and liberal societies. Keller has seen his church grow by God’s power and grace to 5,000+ members. The church has now planted over a dozen “daughter congregations”.

Keller has seen a need for a new book to aid him and his church in reaching New Yorkers. He acknowledges that C.S. Lewis has both influenced him and this book. In his own words he states “Lewis’s words appear in nearly every chapter”. In many ways this book is Keller’s attempt to present a new version of “Mere Christianity”. When talking about the book prior to publication he said:

“I think Lewis' book is peerless, and foolish would be the author who tried to replace him! However, the issues in the public discourse around Christianity have become much more complex than they were in the mid and late 20th century. The questions are now not just philosophical (e.g. Is there evidence for God's existence?). They are also now cultural (Doesn't strong faith make a multicultural society impossible?), political (Doesn't orthodox religion undermine freedom?) and personal……when C.S. Lewis was writing, there was general agreement that rational argument and empirical method were the best ways to discover truth. That consensus has vanished."

It’s clear for whom Keller has written the book:
Keller is a pastor/teacher at heart. This shines through so clearly in this book. I suspect it has taken him almost 20 years to write the book that in his words he “always wanted for sceptical New Yorkers”, because he has been so busy engaging with the many people who pass through his church. He states in the introduction that “respectful dialogue” with secular liberal people is his aim. Some might hear alarm bells ringing with these words – is he presenting a cautious and polite gospel leaving out all the hard stuff? I don’t think so. I don’t see him doing anything more than Paul did in Athens on Mars Hill within a society just as pluralistic as New York. Like Paul (on this occasion), he seeks to evangelise the biblically illiterate with worldviews far removed from his own. Paul’s approach here was different to that which he used in other places (e.g. Pisidian Antioch) and was no doubt deliberate. He begins with respect and restraint (Acts 17:22) and seeks to identify what his hearers believe. He then presents or addresses key themes or beliefs that are essential to an understanding of the gospel. And when he has touched on the key elements of his worldview he turns to the resurrection of Jesus. (Acts 17:16-31). Keller uses a similar apologetic approach.

What does the book cover?

Part 1 of the book is sub-titled ‘The Leap of Doubt’. Keller answers the 7 most common moral and philosophical objections to Christianity. Keller’s material in this half of the book is shaped by the many conversations he has had with sceptical New Yorkers who he obviously enjoys asking, “What is your biggest problem with Christianity” (a nice apologetic starter). The seven chapters cover seven key problems or objections to Christianity:
This first half of the book attempts to tease out the underlying beliefs that lead to the key objections to the faith. Keller strives to find some common ground on which to outline his biblical reasons for the faith. But first, he seeks to shed light on the beliefs that are driving the sceptic’s views before attempting to critique and dismantle them. The chapters are all written in a disarming style that draw on conversations (which he quotes) with people he has met at Redeemer. In taking the reader through these conversations he draws on key writing and thinking from apologists (Lewis key among them), philosophers, theologians, sociologists, new atheists, sceptics and so on.

While the first part of the book is all about discovering why people don’t believe, the second half is all about providing biblical justifications FOR believing in Christianity - ‘The Reasons for Faith". The chapters are:
So does the book succeed?

My short answer is yes, for both the intended audiences. Keller does succeed in providing a useful new resource for sharing with sceptical friends, colleagues, neighbours and family members. Mind you, they’d need to be middle-class educated sceptics if you wanted simply to give them a book. For others the book would be a good resource to read with and discuss one-to-one or in small groups. Keller also succeeds in writing a book that is a useful reference for any Christian who wants to present the gospel to non-Christians.

Are there any weaknesses? Not many in my view, but some will take issue with some things. For example, some won’t like the apologetic tone (pun intended) when discussing sin and its consequences. While Keller talks of the consequences of sin “personally”, “socially” and “cosmically” he stops short of speaking of God’s wrath and impending judgement. Gordon Cheng has quite rightly (and politely – well done Gordon!) pointed this out both on Tim Challies site and on his own blog where Tim Keller responds to the criticism

Tim Challies when he reviewed the book also pointed to a few areas that will concern some Christians. But in doing so, he also acknowledges how much there is to learn from this book.

“Nobody but Tim Keller could have written this book. It seems likely to me that nobody but Tim Keller will agree with everything he says. For example, many believers will be uncomfortable with his defence of evolution - not the naturalistic evolution of so many sceptics, but a theistic evolution that attempts to reconcile rather than ignore the creation accounts of the Bible. Others will take issue with his description of hell and the thread of ecumenism that runs throughout the volume. But if we heed his exhortation to major on the majors, to look to what’s most foundational to the faith before focusing on matters of secondary importance, both believers and sceptics have a great deal to learn from this book.”

What do I think of the book and should you buy it?

I like it a lot and yes, it's worth buying. Of course, if you don’t like apologetic approaches then you might not like this book. If you believe that the gospel can only be presented in pure form with every element writ clear, and if you’re they type who - lacking trust in God’s sovereignty in using our inadequate words and explanations - is racked with pangs of pain and frustration when you don’t manage to get each bit of the gospel explained, done and dusted; then you might find this book too messy around the edges. But if you’re the type of person who gets up every morning well prepared and desperate to be given conversations with friends, colleagues and family members that you can turn to the gospel, then this is your book. For the Christian there are three key things to learn from Keller if you read this book:
But in your hearts set apart Christ as Lord. Always be prepared to give an answer to everyone who asks you to give the reason for the hope that you have. But do this with gentleness and respect, keeping a clear conscience, so that those who speak maliciously against your good behaviour in Christ may be ashamed of their slander. (1 Peter 3:15, 16)

Other resources to support the book

You can download a video in which Tim Keller talks about his reasons for writing the book.

Redeemer Church also has a website dedicated to the promotion of the book and to other useful resources. It offers three sermons that relate to key topics:

* How can there be just one true religion?
* What should I do with doubts?
* Why the gospel is not religion or irreligion, but something else (The Prodigal Son)

The site also has a free readers guide for individual or group use.

The book isn't on sale in Australia as yet but you can buy it online as I did and get it quickly. Amazon has it for $US16.47 plus postage.