The lack of science in 'Live Science'

Don't you just love the way some atheists and 'scientists' opposed to religion often seek to undermine the relevance of religion and faith with dodgy 'science'. A classic example is the American website 'Live Science' that provided 'analysis' of a recently released US Gallup Poll. The opening paragraph was:

Americans' confidence in organized religion is at its lowest in more than three decades, with just 44 percent having a lot of faith in the church, a new Gallup poll released this week suggests.

The results follow a long-term decline in Americans' confidence in religion since the 1970s, when Americans ranked "the church or organized religion" higher than any other institution in the survey, beating out the military and the U.S. Supreme Court. In the 1980s confidence in organized religion fell below 60 percent for the first time. Gallup officials say the dip may have resulted from scandals involving televangelist preachers Jim Bakker and Jimmy Swaggart.

Then, in 2001 confidence increased to 60 percent, only to be hammered back down, possibly as a result of charges of child molestation by Catholic priests, Gallup suggests.

The survey item on which the article is based is as follows:

"I am going to read you a list of institutions in American society. Please tell me how much confidence, you, yourself (sic) have in each one - a great deal, quite a lot, some or very little?" 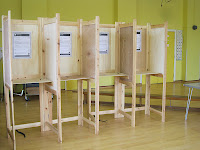 Now it's true that only 44% of people indicated they had a 'great deal' or 'quite a lot' of confidence in the church compared to 60% in 2001. What the article doesn't mention is any of the ratings for other institutions. First, it should be noted that the church was ranked 4th behind the military (75%), small business (63%) and the police (56%). Second, it might be helpful to reflect on some of the results for other institutions below the church. For example:

Oh, and a third thing. While the confidence level for the church was at 60% in 2001, the average for the years 2002-2011 was 49% with variations from 45% to 53%. You might also read the data for all other institutions as well and you will notice that Americans seem to have lost confidence in many institutions since 2001. In fact many are at 'an all-time low', to use the 'Live Science' language. These include the Banks, Public Schools, and TV news (see Gallup's own article on this HERE).

Now I don't intend to dig any deeper to uncover further evidence of the casual use of data by an organisation that prides itself on being 'scientifically rigorous', because my confidence in 'Live Science' is already low enough.