The Influence of Music on Hearts and Minds 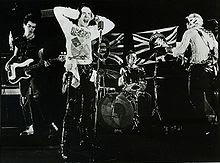 Social and cultural movements often have associated music that contributes to identity and helps to define who the individuals and groups think they are. For example, in the 1970s Punk Rock burst onto the music scene with loud, simple and repetitive beats and at times 'dark' lyrics. The music often spoke of rebellion and a desire to reject mainstream thinking. With any musical movement we find associated cultural practices - the things people like, the experiences they share, the topics that become the focus of conversation, the rules of social engagement and so on. The Sex Pistols quickly developed a cult following as much for the anti establishment views as for the group's music. They often opposed mainstream cultural and social practices and beliefs. Their infamous song 'God Save the Queen' was no doubt intending to offend with lyrics like "God save the queen, She ain't no human being, And there's no future, In England's dreaming". When Johnny Rotten belted out the song in 1977 (in the Queen's Silver Jubilee year!) many were outraged at the attack on the Queen, not to mention the British people, whose conformity to the crown and respect for the monarchy was being belittled. There was widespread outrage, some radio stations stopped playing their songs, parents stopped letting their children go to their concerts etc. Of course, as is often the case, the group's infamy brought many new fans.

Music is clearly an important way in which people express their views of the world, their own allegiances, hopes, desires, loves and so on. But is it also a way in which we are shaped and moulded to understand and share the ideas, truths and falsehoods of songs? Could the very lyrics of a song shape one's thinking and view of the world? While I might just sound like another old bloke lamenting the dangers of popular culture, stay with me. I want to ask the question: Does it matter what we sing? This is a much-debated topic in any church - do the words matter?

In an article to be published in the next issue of Case Magazine that focuses on music (due out late June), Dr Steven Guthrie writes about our reasons for singing. He bases much of his paper on a letter written in the 4th century by the Bishop of Alexandria Athanasius  (c. 295-373) to a friend, Marcellinus. In it Athanasius spoke of the Book of Psalms and the importance of singing them. Surprisingly, the first reason Athanasius offered for singing is not expressing ourselves in words and sound, but taking words in, im-pression. The psalms for Athanasius were a way not just to express our emotions, but also to understand and express the emotions of others. Guthrie reminds us that singing is an act of imitation not just expression. Athanasius wrote:

"He who recites the psalms....sings them as if they were written concerning him, and he accepts them and recites them not as if another were speaking nor as if speaking about someone else. But he handles them as if he is speaking about himself. And the things spoken are such that he lifts them up to God as himself acting and speaking then from himself."

While the above thoughts of Athanasius to a friend have great relevance for those of us who want to consider the value of singing Christian songs, they also seem to raise other questions about the impact of music on those who sing it. If we accept what Athanasius says (and I am persuaded at least in part), then what implications might this have for all of us as we immerse ourselves in secular music? Parents also might well want to ask themselves, does it matter what music my children listen to and sing? I think it does. Rather than our singing being just an opportunity for us to articulate words that we express to music, might they also shape us?

These thoughts have positive and negative implications for music.  If you'd like to read all of Steven Guthrie's thoughts on singing the psalms as well as wonderful articles by Jeremy Begbie, Peter Dart, Rob Smith and Andy Judd look out for the next issue. Why not become an Associate of CASE so that you can receive Case Magazine quarterly.