The Increasing Irrelevance of Universities 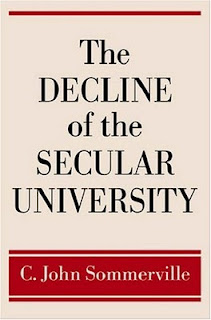 The title of this post isn't just a ploy to get your attention. In recent times many have argued that there is increasing truth to the title. Of course, universities still have relevance, but they have changed a great deal. Even in the 35 years that I have been in universities fulfilling a variety of roles - including student, teacher, researcher and university manager and leader - I have seen some loss of public relevance.

C. John Sommerville has offered some helpful insights into the changes that have occurred in universities in the last century and concludes that much has been lost in terms of relevance. In his book 'The Decline of the Secular University' Professor Sommerville considers the rapid growth in universities around the world and consequent changes. There has been growth in student numbers and staff, increasing wealth, an explosion of courses and increasingly specialised schools. He ponders why at the same time there seems to have been a parallel loss of influence in some areas. In particular, he questions the ability of universities and their staff to provide true leadership in society.  He comments:

If universities are exercising cultural leadership, why do they seem more attentive to pop culture than to the high culture they were nurtured in? If universities are offering scientific leadership, why do they mainly hire their labs out to government and business, with the goal being patents? If they are offering social leadership, why don't professors dominate the talk shows that try to embody our "public opinion"? Is it true, as we often hear, that universities have become trade schools, offering the credentials that students prefer to a rounded education? Why are they only maintaining booths in the intellectual marketplace rather than providing leadership of any kind?

While I believe that Sommerville exaggerates the situation, tends to smooth out the complexity that exists and speaks very much from an American perspective, his central thesis is worth consideration.  In essence he claims that "the secular university is increasingly marginal to American society and, second, that this is a result of its secularism". And he goes further, to suggest that the questions that should be central to the university's mission have a religious dimension that no longer can be addressed. The exclusion of religion or its domestication into increasingly rare theology departments and church-founded residential colleges has left universities with an inability to answer questions that matter.

Sommerville asks, why are universities failing to connect with our deepest interests? What does the average university professor or school have to say about what it is to be human? How do the increasingly large number of professional courses prepare graduates to deal with ethical issues? Why have many western universities removed courses that focus on 'Western Civilisation'? Can we continue to justify the fact/value dichotomy that has helped to expunge our universities of discussions about religious belief and values?

I don't for a minute think that universities can return to the past, nor do I seriously believe (or even want) religious groups to exercise greater control over universities. But we do need a more open discussion about what it means to be human, and the place of values, ethics and morality. Recent decades have seen matters of faith and belief driven underground and seen as irrelevant to learning and life. Nothing could be further from the truth. We need university staff members who are people of faith (and I mean all faiths) to increasingly consider how this faith relates to their personhood and how that influences all areas of life. In the process, they need to be prepared to challenge the fact/value dichotomy. That is, the philosophical concept that we should not to derive a value from a fact, or an 'ought' from an 'is'.  This has been an important foundation to the secularisation of the modern university. Sommerville rightly argues that line between fact and values, or put another way, reason and faith, is not as clearly drawn as might think. The unquestioning adherence to this dichotomy needs to be contested. There are some significant scholars who have done just this, including Harvard Philosopher Hilary Putnam, Nobel economist Amartya Sen and Frances Fukuyama who have questioned the ability of philosophers, scientists and economists to separate fact and value.  Any Christian who is part of the academy needs to be prepared to engage in discussion and debate, rather than simply allowing concepts like belief, values, ethics and truth to be marginalised.