The importance of the imagination for flourishing and faith

I write regularly about developing the imagination of children on my blog 'Literacy, Families & Learning' and have written from time to time on the CASE blog about the imagination, play and creativity. This post is a modified version of one I wrote early in 2011. It was based on a book by Anthony Esolen, professor of English at Providence College in Rhode Island.  The central thesis of his book - 'Ten Ways to Destroy the Imagination of Your Child' - is that the way we raise, care for and educate our children is increasingly destroying the imaginations and creative capacities of our children. He draws heavily on the writers of classical and modern literature to reinforce his point.

Underlying Esolen's argument is his belief that God made us to imagine and that it is at least partly through our imaginations and longings that we seek him and experience all that he intended for us.

Esolen uses a wonderful cross section of literature, music and even art to make his simple points about the nature of imagination, its ultimate purpose, and the dangers of shutting it down in our children. The writing is ironic in style as the title suggests. At times this seems a little forced but overall, it works powerfully.

His 10 'Methods' that will destroy the imagination of children, bring into focus that which can stifle learning and close down the possibilities for the imaginings of children. Throughout his chapters he argues that if we do shut down children's imaginations, that we also reduce their ability to solve problems, write with voice and effectiveness, and be transformed (or at least shaped) by the language and power of literature.

Esolen's 10 Methods to destroy the imagination 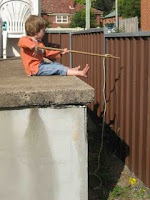 1. Begin by rearing children almost exclusively indoors - give in to the threats of the outdoors; don't risk allowing them to have unbridled experiences out of our observable space. Lock them up in classes and organised instruction and avoid giving them opportunities to run free.

2. Never allow children to organise their own worlds of exploration of that which is interesting or challenging - replace the spontaneous and child initiated and replace it with 7 days of structured activities controlled by others and a timetable that leaves no scope for exploration, time wasting and contemplation.

3. Don't risk allowing children to explore machines or encounter those who know and use them - privilege safety above all things, cut craftsmen from the child's world, despise practical and craft knowledge, forget about the challenge and fascination of maps, diagrams and the like.

4. Replace fairy tales with clichés and fads - water down stories to remove the evil and violent, look for tales that 'flatten' and homogenise, replace fundamental truths with clichés and ideological manifestos.

5. Denigrate or discard the heroic and patriotic - remove fathers who are heroes, men who are warriors, lose sight of the 'piety' of a place like the Welsh uplands and coal mines of Richard Llewellyn's 'How Green was My Valley'. Ignore the dignity of simple people and their ways.

6. Cut down all heroes to size - don't allow a sentimental admiration of a hero, dismiss courage, beat from our boys any hint of hero worship. Instead grow men 'without chests' who spend hours on violent video games but never rumble in the back yard.

7. Reduce all talk of love to narcissism and sex - replace the music and tenderness of love in the Odyssey, or the poetry of Stephen Foster for a lost love, with a reduction of love to the mechanics of sex; "reduce eros to the itch of lust or vanity". Replace the first pangs of curiosity of a boy for a girl, or a girl for a boy, with a bombardment of images of what love isn't.

8. Level all distinctions between man and woman - just as individual personalities are washed from our classrooms, so too, reduce all differences of gender, and convince children that boys and girls are just the same.

9. Distract the child with the shallow or unreal - fail to encourage the child to hear and sharpen the senses before creating, and abolish solitude and silence. Instead, fill the child's life with the 'noise' of television, video games and other forms of banality. Don't just allow 'noise' to get in the way, but more importantly, allow mental and spiritual interference. Separate the child from the relationship of family, neighbours and friends and place them in after school care, preschools etc.

10. Deny the transcendent - deny the idea of God, ignore the mystery of faith and religion, ensure that unlike the ancients in the caves of Lascaux there is little opportunity to contemplate and create a veritable cathedral born of their imaginings. Do everything possible to erase any opportunity for your child to search out the inscriptions of praise on each human heart.

Esolen has put his finger on something important. He isn't the first person to write about imagination and, as he suggests himself, he's probably not the best-qualified person to do so either. But his book reminds us that imagination is not just a cognitive state to be prodded and used for the banal or even the practical. In fact, it has moral dimensions that can be seen in a biblical anthropology of personhood. A view of the person that sees the ability and desire to imagine as part of God's blueprint for his people. 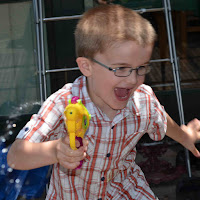 Esolen also offers a useful social commentary on the tendency to seek the banal rather than that, which is rich and complex. His ironic commentary on approaches to teaching and child rearing that value the tangible and measurable, rather than the whimsical and creative is helpful, although in places a touch too simplistic. One example of this is that in dismissing technology and in rightly pointing to the abuses of gaming and television and their ability to distract from friends, play, exploration etc, he fails to acknowledge that technology can expand the imagination too. Technology can open up a world of new facts that trigger exploration, or offering opportunities to create images, videos and complex texts that expand the imagination.

Some won't like Esolen's ironic style, for there is a danger in its over-use. At times it tends to give the sense that Esolen is trivialising the issues and ignoring complexity and ambiguity.  This might lead some not take Esolen's arguments seriously. This would be a pity for there is much wise advice in this book.

Esolen offers a timely and beautifully written analysis of pop-culture and a world where we 'flatten' the view of what it means to be men and women, we lose a vital focus on moral centring and values, we accept an impoverished view of childhood, and we replace love for lust, the thirst for the deep with the shallow and flood children's lives with banality instead of richness. This book will have non-Christian detractors, but it will also stimulate discussions concerning the loss of childhood and the place of the imagination not just in life but also in grasping something of the transcendental and an existence beyond this life. As Esolen reminds us:


The imagination opens out not principally to what it knows and finds familiar, but to what it does not know, what it finds strange, half hidden, robed with inaccessible light. The familiar too can be an object of wonder, but not by its familiarity...

1. 'The Importance of Simple Play' (HERE)

6. Posts on Esolen's book on my daughter's blog (HERE)

7. Raising boys' sights above the gross and the violent (HERE)