Home   And Just in CASE   The Genesis Enigma: Why the Bible is scientifically accurate
Apologetics Faith Science

The Genesis Enigma: Why the Bible is scientifically accurate 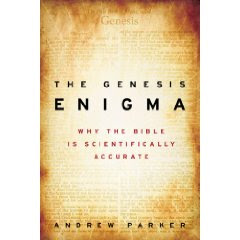 We receive many books to review at CASE that we usually send on to reviewers. There is always a temptation to read every book yourself, but usually common sense over-rules the temptation and you pass each book on to someone else. I failed this test with Andrew Parker's book 'The Genesis Enigma: Why the Bible is Scientifically Accurate'. A new book on Genesis is not unusual, nor is one that claims that the Bible is true. But what is more unusual is to find a scientist with no faith claiming that Genesis chapter 1 is consistent with the latest evidence-based science. This is in stark contrast to many scientists and atheists who spend a lot of time pointing to what they see as the inaccuracy of the Bible.

The motivation for the book

Parker's exploration of the topic arose after he had published a popular scientific book called 'In the Blink of an Eye'. The book explores the origins of life on earth and in it he outlines his 'light switch' theory that forms part of many scientists' understanding of how life began. His theory based on fossil evidence, holds that it was the sudden introduction of vision on earth that triggered the sudden explosion of complex animal life in the Cambrian era. After the publication of his book on the theory he started to receive letters from Christians pointing out that his scientific theories had parallels with the first chapter of the book of Genesis in the Bible. He decided to have a look at Genesis 'mainly out of courtesy' and was surprised to find that there were a whole series of parallels between the Bible's creation narrative and modern scientific accounts of the beginnings of life.

The Genesis Enigma is the result of his reading of Genesis, exploration of biblical history, and discussions with leading Christian scientists like Professor John Lennox, apologist Alistair McGrath and others. He writes the book as an agnostic scientist. I don't think he calls himself an 'agnostic, but as he writes the book this is what he seems rather than an atheist. In the first chapter of the book he explores the evidence for the authenticity of the Old Testament and evidence for the claims that it is an accurate non-fictional work. In the remaining chapters he provides an explanation of how scientific understanding of the origins of life developed over time and parallels this with the Genesis chapter 1 account.

What does he conclude?

In short, he concludes that the parallels between Genesis 1 and science are so strong that the writer must have either made an extraordinarily lucky guess, or that the writing was inspired. He sums up his arguments in the final chapter of the book this way:

"...the Genesis Enigma holds that the Bible has, in its opening page, correctly predicted the history of life on earth, with its series of macro-evolutionary steps, or fits and starts, from the origin of our solar system to the evolution of birds and mammals. We can be certain that the author of this biblical account would have had no idea of these scientifically established events, covering billions of years....The possible explanations for this parallel.....are clear-cut: either the writer of the creation account of Genesis 1 was directed by divine intervention, or he made a lucky guess" (pp 202-203).


In summing up his work he asks himself (and the reader) a serious question. "Could it be real?" Has the Bible survived as an authoritative text for many millions of people because it carries a divine message that strikes a chord with humanity? He concludes:

"But I must admit, rather nervously as a scientist averse to entertaining such an idea, that the evidence that the writer of the opening page of the Bible was divinely inspired is strong. I have never before encountered such powerful, impartial evidence to suggest that the Bible is the product of divine inspiration. The Genesis Enigma may provide us with support for this proposition on a whole new level" (p.238).

What Parker is NOT saying

Lest Six Day Creationists and Intelligent Design advocates see Parker's book as support for their readings of Scripture, Parker is at pains to dismiss such arguments. In no way is he trying to suggest that Genesis 1 is a scientific account. While accepting that people are free to believe both these theories, he suggests that they are faith-based rather than evidence-based. Parker isn't suggesting that the Bible is science. Rather, he is suggesting that faith and science can co-exist. He goes further to accept that it is possible to find "...God within the confines of the evidence of evolution..". Whatever theory is accepted for the origins of life, Parker suggests that a prerequisite is needed and that science cannot provide the answers. He continues to speculate and pose many questions as he tries to make sense of his discovery. Why is there a human propensity towards religious thought? Why has this persisted throughout the ages? Did the concept of God evolve in humans because it was needed to raise our emotional state (the claim of some atheists and scientists)? Or was it God-given? Could religion be a critical element in the human mind?

Reservations about this book

The dangers with a book like this is that in writing such an honest account of one's pondering about faith and the origin of life, the writer leaves himself open to criticism from absolutely everyone. Some scientists will critique his science, Christian's may critique his reading of Genesis, theologians might question his reading of Scripture and his understanding of God, and historians could question some of the historical analysis. But in spite of this, I find myself filled with admiration for Parker's honesty and humility in exposing his inner struggles to reconcile the coexistence of faith and science. In the final pages of the book he displays his vulnerability with these words:

"I am a scientist, and incorporating God into my thinking feels like a quantum leap. But I am at least comfortable with the idea that my acceptance of evolution, and science in general, does not affect, or is not affected by, my feelings about God" (p. 235)

Parker's book is an interesting apologetic from a surprising source. It's worth a read.