The benefits of failure

We live in a world where (as the saying goes) "everyone loves a winner, nobody likes a loser". In fact one of the most common words of derision for younger generations is "loser", or as they put it, "you loser!" Media and advertising constantly promote the view that life will be all the richer and rewarding if we can ensure that we're winners - "winners are grinners!" And yet, we know that people also talk about learning from their mistakes. Failed businesses, failed relationships, failed exams and so on, can all lead us to reflect on ideas that didn't work, motivations that sold us short, errors we have made in relationships, priorities that were all wrong and paths we should have avoided. In every instance of failure there is also an opportunity in which to learn.

The work of the 'Review of the National Innovation System' was handed down yesterday - Venturous Australia (this warrants its own post later) - and I don't think the 'f word' (failure!) was anywhere to be seen. More's the pity because I suspect that failure is foundational to innovation, success, wealth, and life's ultimate fulfilment. It's part of the blueprint for an innovative and successful nation, and yet the report doesn't give much consideration to failure, one of life's best teachers. 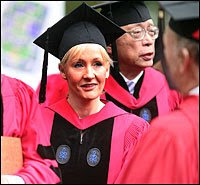 However, the world's most successful children's authors, J.K. Rowling, seems to understand from experience that failure has benefits. In a graduation address at Harvard University on the 5th June 2008, she had the good sense when speaking to one of the most talented and privileged group of young minds in the world, to speak about the benefits of failure. In choosing to do this she acknowledged that they were a group not "not very well-acquainted with failure". As a school leaver she had just wanted to write novels, and was ready to study English at university. But her parents had other more practical ideas and urged her to pursue a vocational degree. She compromised and agreed to study Modern Languages, but as soon as she was dropped off at University, she transferred to Classics. In her address she went on to share her experience of failure after university and the role that imagination played in this phase of her life.


Ultimately, we all have to decide for ourselves what constitutes failure, but the world is quite eager to give you a set of criteria if you let it. So I think it fair to say that by any conventional measure, a mere seven years after my graduation day, I had failed on an epic scale. An exceptionally short-lived marriage had imploded, and I was jobless, a lone parent, and as poor as it is possible to be in modern Britain, without being homeless. The fears my parents had had for me, and that I had had for myself, had both come to pass, and by every usual standard, I was the biggest failure I knew.

Now, I am not going to stand here and tell you that failure is fun. That period of my life was a dark one, and I had no idea that there was going to be what the press has since represented as a kind of fairy tale resolution. I had no idea how far the tunnel extended, and for a long time, any light at the end of it was a hope rather than a reality.

So why do I talk about the benefits of failure? Simply because failure meant a stripping away of the inessential. I stopped pretending to myself that I was anything other than what I was, and began to direct all my energy into finishing the only work that mattered to me. Had I really succeeded at anything else, I might never have found the determination to succeed in the one arena I believed I truly belonged. I was set free, because my greatest fear had already been realised, and I was still alive, and I still had a daughter whom I adored, and I had an old typewriter and a big idea. And so rock bottom became the solid foundation on which I rebuilt my life."

Rowling went on to share how failure taught her many things:
All of this sounds almost biblical. Unlike Venturing Australia, the Bible talks a lot about failure, although its counterpoint to failure is more often restoration, not simply success.

A study of the Bible will reveal that many of the central and best-known figures in the Bible experienced failure in life. Abraham, Moses, Elijah, David, Solomon, Peter and Paul, to name a few. Elijah after taking on four hundred and fifty prophets of Baal and four hundred prophets of Asherah at Mount Carmel, and defeating them in a spiritual contest that saw God perform great miracles through him, is just a short while later under a broom tree in deep depression, praying to God that he might die (1 Kings 18-19). David was plucked from being a shepherd boy to defeat Goliath, became a hero to his nation, and eventually king of Israel (1 Samuel 16). The man acknowledged by God as “a man after my own heart” (1 Sam 13:14) went on to fail badly. He succumbed to sin and ended up engaging in lust, deception, adultery and murder (2 Samuel 11). The Apostle Peter boldly declared his loyalty and commitment to Jesus, but failed by denying that he knew him three times within moments of his death. I could go on, but hopefully we all get the point. The Bible has many examples of God’s people failing and yet later being restored and going on to fulfil God’s purpose for their lives. Each failed at some point in their lives, sometimes in spectacular fashion, and often after a triumph. But their failures were not the end of their stories and did not stop them from continuing to serve God. Each of these people not only recovered from their failure, they grew as a result of it. They learned from their failure, confessed sins to God, and were often able to be used in even mightier ways.

While J.K. Rowling did not set out to speak of failure due to sin, nor was she talking of restoration to a relationship with God, there are clear parallels. Life will involve successes, and failures. We learn from both, but in a profound sense, it is failure, or the recognition of one’s frailty and the search for new hope and direction, that has a more significant impact on shaping us and making us better people. The Bible of course points to our need to accept that we can never ‘succeed’ on our own. Life’s most significant goal is to acknowledge God, accept the forgiveness offered through the death of Christ (1 Peter 3:18) and seek to honour and serve him all the days of our lives. And the prize is out of this world (John 3:36)! Far beyond fame, money and success in this life.

I'm glad that J.K. Rowling confronted the graduates at Harvard with the benefits of failure. I wonder how we might factor failure into our thinking a bit more, and in particular, into our teaching and nurturing of our children. I want to ask parents who read this blog five simple questions:

How often do you stress success to your children, and how does this compare in frequency and intensity with discussions of failure?
How often have you shared with your children that you fail at times?
How does the school where your children attend talk about failure?
How much are your goals for your children shaped by a desire for success in worldly terms?
How do you try to help them understand that their 'good' (in Romans 8:28 terms), is just as much about how they cope with and respond to failure rather than just success? 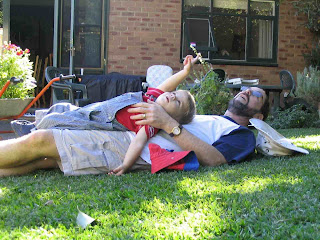 I could go on to frame questions for pastors and teachers in the church and leaders of all kinds. And believe me, I ask myself questions like these regularly. A full understanding of how God uses failure to teach us is important. We tend to focus on spectacular moral failures when we do consider failure, but I think there is great benefit in considering failure more broadly within the context of God's redemptive work in people's lives.


Who shall separate us from the love of Christ? Shall trouble or hardship or persecution or famine or nakedness or danger or sword? As it is written:

"For your sake we face death all day long; we are considered as sheep to be slaughtered."

No, in all these things we are more than conquerors through him who loved us. For I am convinced that neither death nor life, neither angels nor demons, neither the present nor the future, nor any powers, neither height nor depth, nor anything else in all creation, will be able to separate us from the love of God that is in Christ Jesus our Lord (Rom 8:35-39).

The text of J.K. Rowling's address can be found here.