In the latest edition of Case magazine our writers explore the theme 'Living Stories'. Our intent is to explore the place of story in life, faith and the imagination. In the opening essay I consider the role of stories in Christian formation and begin with a personal reflection. I have no recollection of ever being read to as a child. But by middle age I had concluded that I was raised in a home rich in stories and that these had helped to shape me. My parents had filled my world with their own stories and the texts and stories that had ‘spoken’ to them.

My father was a consummate oral storyteller, and my mother—an entertainer and singer—filled my life with opera, ballads and popular music. As a child my father’s stories of life in Scotland, his battles as a trade union leader, sporting conquests and life's disappointments, had washed over me and engaged me. So too did the stories of my maternal grandfather with whom I stayed during most school holidays—a godly, creative and intelligent man. He was a brilliant inventor and businessman who constantly quoted the Scriptures (especially the Psalms and Proverbs) and recited Australian and Scottish poetry whenever we did things together.

I saw no place for God in my life until I was 31, but I can see with hindsight that my own emerging view of the good life was based as much on my rejection of many of my father’s ideas as my embracing of the alternative narratives of my grandparents and a growing group of Christian friends who had different hopes and desires. This is the way narrative works in our lives. It touches us, teaches us and in time shapes us.

The place of story in our formation 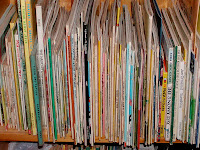 When I use the word ‘story’, I mean more than just an account of imaginary or real people and events told for entertainment’. Rather, I am using it as a variant of ‘narrative’, that is, ‘a spoken or written account of connected events’. I deliberately use ‘story’ because it carries with it the implication of something with an imagined, constructed, purposeful and communicative nature. It includes ‘factual’ recounts and passionately held views expressed in narrative form by way of illustration, anecdote, poem, song and so on. Stories are deeply personal things, and have purposes that go well beyond entertainment or information. Our stories reflect our history, our values, our beliefs, our priorities and our intent when we share them.

Stories are also more than disconnected and isolated accounts. They typically have a relationship to other larger metanarratives. Christian Smith suggests that narratives ‘seek to convey the significance and meaning of events by situating their interaction with or influence on other events and actions in a single, interrelated account’. They include a set of characters or players, both subjects and objects of the action. They have a plot which gives shape to the action (a beginning, middle and end) and they seek to communicate significant points or messages. Smith suggests that in this age dominated by the power of reason and evidence, and the rational over the creative, we are nonetheless still creatures who are ‘the makers, tellers, and believers of narrative construals of existence, history, and purpose’. We make stories and in turn are made by them.

This ‘making’ of us is shaped at least in part by the stories we absorb, give expression to and help create. James K.A. Smith - who will deliver the New College Lectures in 2012 - suggests in his book 'Desiring the Kingdom' that this is not simply a cognitive process. Rather, we are embodied creatures who absorb the stories of life and engage in rituals and cultural practices that shape our desires and our vision of the good life. This argument draws on Charles Taylor’s concept of the ‘social imaginary’ mentioned earlier. Taylor argues that societies are given direction by an imagined and hoped for view of the world. This is not expressed simply in ‘theoretical terms, but is carried in images, stories and legends’. Humans are not given their major focus and direction simply by reasoning, but by the imagination.

Taylor’s use of the term ‘social imaginary’ is quite deliberate. Much broader than an intellectual understanding of reality, his focus is on how people ‘imagine their social surroundings’. While his category is a little slippery and doesn’t address all that we know about memory, thinking and knowledge, the point is worth making. Our imaginations are primed by the narratives we experience in daily life. Thus primed, we develop desires and views of the ‘good life’, accept shared group understandings and make sense of our experiences. The use of the term ‘social imaginary’ emphasises the rich social context in which we make sense of the world, a context influenced as much (or more) by story as by deliberate reasoning. This is not to suggest that our stories are not subjected at times to analysis and critique, but they are often born in life moments where our imaginations are captured, even if only momentarily, by narrative whether heard, read, seen or experienced.

The stories that are part of our experience thus shape our vision of the good life; give focus to our desires, and direction to our lives. As well, they contribute to building community. As Oliver O’Donovan reminds us in his book 'Common Objects of Love', a community is ‘a gathered multitude of rational beings united by agreeing to share the things they love’. In essence, people come to see a common ‘view of the good’ and are hence capable of common action, cultural practices and identity

James K.A. Smith agrees with Taylor that our hopes, goals, desires and views are influenced by our imaginative experience of the world, including its stories. Echoing Augustine, he argues that we inhabit the world, not primarily as thinkers or believers, but as ‘more affective, embodied creatures who make our way in the world more by feeling our way around it’. We are above all things ‘agents of love, which takes the structure of desire or longing’. Smith reminds us that our desires are aimed at our hoped for ends (or goals) and set the trajectory for our lives:

…a vision of the good life captures our hearts and imaginations…by painting a picture of what it looks like for us to flourish and live well. This is why such pictures are communicated most powerfully in stories, legends, myths, plays, novels, and films rather than dissertations, messages and monographs.

To be human is to understand our God-given desire to know our purpose in life and, to seek fulfilment in the ‘hoped for’, the ultimate quest of each life. There is an intertextual cacophony of stories that shape us and influence the things we desire, and from these stories we ‘read’ various representations of the future, and alternative visions of human flourishing. In a sense, we are taught, perhaps even lured by these ‘pictures’, these visions of the future.

Other articles in this issue

In the same issue of Case magazine that my own essay appears there are four other essays that explore the theme of 'Living Stories'. These include an essay based on a lecture Bruce Smith gave in 1997, 'Hope and Tragedy in Life and Literature'. Chris Swann explores how the gospel can equip us to engage with stories and literature, Michael Ward writes about C.S. Lewis and imagination and the apologetics of story and William Tate offers an interesting insight into Karl Barth's 'Secular parables'.  You can order the magazine HERE or become a CASE Associate for $AUS 55  which entitles you to 4 issues of Case magazine each year.