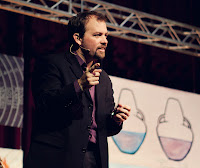 James K.A. Smith has just completed the annual New College Lectures. He spoke on the broad theme of 'Imagining the Kingdom'. Last night he presented his second address titled 'Sanctified Perception: How Worship Works'. I will post on the series properly over the weekend but here's a snippet:


'What would it mean to think of Christian formation as also an “unconscious” education—something inscribed on our bodies as much as it is deposited in our minds? My goal this evening is to suggest that this is, in fact, how worship works. That is, liturgies—both Christian and secular—are embodied, enacted performances that inscribe in us a faith that gets under our skin. To try to unpack this, I want to draw on the work of Pierre Bourdieu as a bit of a conceptual toolbox to get at the issues.'

It was an excellent lecture. More to come on the blog and the CASE site.