Home   And Just in CASE   Revealing the Truth or Hiding it From Children: Learning from Humpty Dumpty
literature narrative parenting truth

Revealing the Truth or Hiding it From Children: Learning from Humpty Dumpty 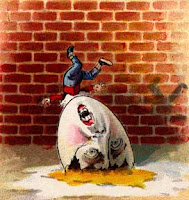 The BBC created quite a stir two weeks ago when one of its children’s programs altered the words to the children’s rhyme ‘Humpty Dumpty’, in order to give it a more cheerful ending. In the revised edition, instead of all the kings horses and all the kings men not being able to 'put Humpty together again', all the King's horses and men 'made Humpty happy again'. The revision of fairy tales and nursery rhymes isn’t new. In recent years some have been modified to remove racism, sexism and in some cases culturally insensitive material. As well, some have been touched up in order to make them easier to understand for today’s children. But is this always a good idea?

It’s easier to build arguments for removing racism and culturally insensitive material, but the type of revision that Humpty Dumpty has suffered is less justifiable. Why do I say this? I think there are a number of reasons but I’ll comment on just two.

1. Narrative helps to explain and offer a rehearsal
for life

Children’s stories introduce ideas and concepts in narrative form as a type of rehearsal for life. Narrative whether told, heard, seen or written can provide a way to learn about, reflect on and explain life. In fact life always ends in death and there can be suffering, sickness, persecution, fear and sadness along the way. Stories may just as easily give a false impression of life if they distort the nature of human experience, or offer it in a limited way. Life doesn’t always have a happy ending. In fact for all of us it can involve pain and suffering and ultimately will end in death.

How children grow in their understanding of the realities of life varies and causes many parents anguish and sometimes pain. Every parent who has had a tearful child come home complaining about being bullied for the first time; having been teased because of their appearance, body shape etc, will know what I mean. Life requires us to cope and grow with our successes, failures, pain, ridicule, joy and sorrow. But how and when do we deal with such issues? Because children begin life in innocence with no awareness of the hard and sometimes dark side of life, parents are right to be cautious about what concepts they introduce to their children as well as how and when. Greg Thiele’s post on appropriate movies for children (here) dealt with this issue. Children need to grow emotionally and not be forced to deal with issues beyond their stage of emotional development.

Parents are the key to the child’s emotional growth and wellbeing and have the important task of knowing what to say and when to say it to their children. It’s terrifying for any parent to let a child go off to preschool or preschool where we can’t personally respond to every situation. Often the way we respond to our children when they get home is in terms of story or anecdote. The child tells their story about what happens, and the parent often responds in narrative form, “I had something happen to me….”, “It’s a bit like that time that your sister….”, or “Daddy had that happen to him….”.

Beyond real life anecdotes and stories children are introduced to many more serious aspects of the human condition through story. On my other blog ‘Literacy, Families & learning’ I have written about the role that literature plays many times (here). For example, in a post on ‘Conquering Fears’ I explored the role that children’s literature can play in helping children deal with unknown fears and known fears like death, danger and the threats of other children. I also explored the role of literature in understanding ‘Death’ and ‘Being Different’.

Christian parents will of course always want to bring back their discussions with their children to the central narrative of creation that explains all other things. And while the best place for parents to start is in reading the Bible to and with their children, all narrative can provide echoes of the central and foundational human narrative. As I wrote in a previous post on ‘Christian Writing for Children’ (here), the gospel of Christ is the central narrative to which virtually all other narratives have some relationship – certainly in the Western cultural tradition and literature. The central focus of the Bible is Salvation History; with its central narrative tracing both the history of Judaism and Christianity and God’s redemptive plan for his people. In the beginning God created…and it was good. But sin entered the world, man rebelled against him and so God placed a curse upon his creation that one day would end in judgement. But God always had a plan for such rebellion; a plan of redemption motivated by love. An amazing gift of grace; his own son sent to die and three days later to be raised from the dead to defeat sin and death. A plan that provided a way for creation to be restored and for humanity to be brought back into a relationship with him.

The biblical narrative of God’s redemptive plan and work is the central narrative that gives shape to all other narratives. In every story there is a sense in which there is an echo of the biblical narrative. J.R.R. Tolkien once said (to his friend C.S. Lewis) that “The Christian story is the greatest story of them all. Because it’s the real story. The historical event that fulfils the tales and shows us what they mean." Lewis and Tolkien both saw the gospel narrative as the central or foundational human narrative.

2. Back to ‘Humpty Dumpty’: Disconnecting stories from ultimate truth

So does it matter that they’ve messed up ‘Humpty Dumpty’? I think so, but probably for different reasons than Ricky Gervais who is also fired up about the matter (see below). There are two good reasons. First, in messing about with a simple rhyme or fairy tale we strip away the depth of meaning and possibilities that were originally intended by the writer. Most fairy tales, in fact most children’s stories have many layers of intended meaning. In fact, many well known nursery rhymes and playground chants have deep political meanings. I’m preparing a separate post on this for my other blog, but let me illustrate with poor old ‘Humpty’. 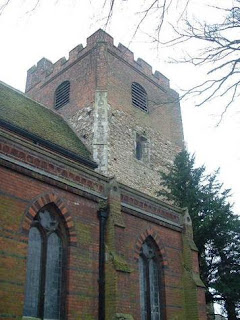 We're not certain what the original intent of Humpty Dumpty. Some suggest Humpty Dumpty was a colloquial term used in fifteenth century England to describe an overweight person. Others suggest that the ‘Humpty Dumpty’ of the nursery rhyme was a large cannon used in the English Civil War (1642 - 1649) as part of the siege of Colchester (1648) by the Parliamentarians (Roundheads). It is believed that the cannon was placed on the city wall near St Mary’s Church (opposite - Colchester Arts Centre today). It has been suggested in one account that a shot from the cannon of the Roundheads succeeded in damaging the wall beneath ‘Humpty Dumpty’ that caused it to fall to the ground. The Royalists tried to restore it but 'all the King's men' couldn’t raise the canon back onto another section of the wall due to its weight. The town of Colchester eventually fell after a siege of eleven weeks. Many now doubt this reading of Humpty. Some suggest that it alludes to English King Richard III and the Oxford Dictionary refers to 'Humpty Dumpty' as a brandy drink boiled with ale. I like the siege of Colchester version but it is difficult to know the truth of the rhyme.

So at one level, changing the ending simply relegates this rhyme to a playground chant with a happy ending. But at a more fundamental level, the change to the rhyme strips away a connection or echo of the divine narrative. Changing the ending as they did is to suggest a lie to our children (if repeated). Instead, children must learn (eventually) that life can take twists and turns that we don’t expect, and that for all of us it will end up in death. But they also need to learn over time that while there is pain and loss in life, there is also joy and hope, and that ultimately we will be ‘put back together again’ just like the cannon (or the egg!) in and through Christ. Our only hope is in him, and we need not despair or be fearful of death.

For I consider that the sufferings of this present time are not worth comparing with the glory that is to be revealed to us. 19For the creation waits with eager longing for the revealing of the sons of God. 20For the creation was subjected to futility, not willingly, but because of him who subjected it, in hope 21that the creation itself will be set free from its bondage to corruption and obtain the freedom of the glory of the children of God. 22For we know that the whole creation has been groaning together in the pains of childbirth until now. 23And not only the creation, but we ourselves, who have the firstfruits of the Spirit, groan inwardly as we wait eagerly for adoption as sons, the redemption of our bodies. 24For in this hope we were saved. Now hope that is seen is not hope. For who hopes for what he sees? 25But if we hope for what we do not see, we wait for it with patience. (Romans 8:18-25)

I don't want to trivialise a serious post, but I enjoyed the 'analysis' of Humpty Dumpty by Ricky Gervais. Gervais is one of my favourite comedians (star of the British TV series ‘The Office’) has a rant about what they did to Humpty. Apologies for some of his language.