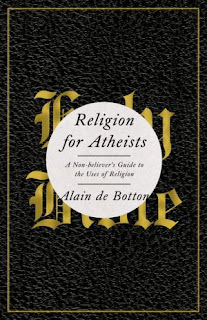 In recent weeks, there have been a couple of newspaper articles commending the Christian faith for reasons other than faith. Two of these have had me thinking about the source of the media attention and whether the hostile full frontal attacks by atheists might have led some to adopt a different approach. Perhaps some atheists have concluded that their cause is furthered by simply acknowledging the odd merit of the church, while effectively still telling Christians that they are all deluded and wrong; in a more polite way of course. This is not far removed from the approach of some within the church who would want to airbrush out all the 'difficult' bits of Christianity.

This strategy of course is very convenient for those people who want the cultural practices of religion without the faith. The first article that got me thinking was in the Sydney Morning Herald several weeks ago, 'Churchgoers keen to take a pew despite their disbelief'. In it, a parishioner from a Uniting Church shared how he does not believe in God and doesn't see this as necessary for church attendance. He's right of course about belief not being required for church attendance, any Christian church would welcome him. However, the idea that you might attend church for cultural, social and justice reasons alone, is out of step with the teachings of Christianity. As well, I suspect it says something about the vague message of the specific church he attends as well.

"[My spirituality] drives me to want to be in a spiritual community that has a sense of a mission to do good things and to help do justice in the world...but also I like the Christian and other religious liturgies and spiritual practices – I find that they're very good for me. But, for me, belief in a literal god is quite unnecessary."

Interestingly, the man said he rejects the label "atheist" because he sees it as having militant connotations.

The second article was a brief interview with Alain de Botton about his soon to be released book, 'Religion for Atheists'. When asked why an atheist would write this book de Botton says:

"...The supernatural claims of religion are entirely false - and yet religions still have some very important things to teach the world."

We'll have to wait for the book to see what he thinks the 'very important things are'. But in both these examples, one from a churchgoer and the other from an atheist, we see a common way to deal with Christianity, cut out the hard bits from the Bible with which you can't agree and simply stress the positive and get on with life. Both approaches are a rejection of God.

In one sense, as a Christian, I'm pleased when someone like de Botton takes a less hostile line than atheists like Richard Dawkins and Christopher Hitchens, however, I can't help feeling that de Botton whether with a silk glove or an iron fist, is still displaying the same arrogance and pride in his own knowledge as a churchgoer who says he needs only the cultural bits; the music, lifestyle and good friends. In each case, there seems an effort (whether deliberate or not), to domesticate the Christian voices that would want to stand firm to the claims of the Bible.

However, I don't want to end on a negative note. It seems to me that while we need to be wary of those who damn us with faint praise, at least people like de Botton, Geoffrey Blainey, Clive Hamilton, Terry Eagleton and others like them, provide an opportunity for conversation and apologetic exchange. While we mustn't allow the message of Christianity to be softened, or watered down to make it acceptable to others, we do need to enter into dialogue with atheists and agnostics with humility and respect for those with different views.

Interview with Alain de Botton on his new book HERE