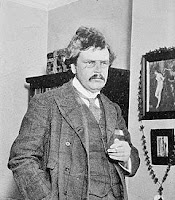 As I contemplate an overseas conference in a beautiful European country, the words of G.K. Chesterton* on 'real' community life, are an important reminder. Living in one's own community is where we need to concentrate most of our energy and prayer. We need to guard against the tendency to want to escape everyday life in favour of more exciting adventures.

In this quote Chesterton argues that families and communities are good, not because they are "peaceful, pleasant and at one" but because, often they are not, and that we need to learn to stick it out, not simply run away to exotic locations as an 'escape'.  How desperately do we at times seek to escape the mundane grind of daily life?

If we were to-morrow morning snowed up in the street in which we live, we should step suddenly into a much larger and much wilder world than we have ever known. And it is the whole effort of the typically modern person to escape from the street in which he lives. First he invents modern hygiene and goes to Margate. Then he invents modern culture and goes to Florence. Then he invents modern imperialism and goes to Timbuctoo. He goes to the fantastic borders of the earth. He pretends to shoot tigers. He almost rides on a camel. And in all this he is still essentially fleeing from the street in which he was born; and of this flight he is always ready with his own explanation. He says he is fleeing from his street because it is dull; he is lying. He is really fleeing from his street because it is a great deal too exciting. It is exciting because it is exacting; it is exacting because it is alive. He can visit Venice because to him the Venetians are only Venetians; the people in his own street are men. He can stare at the Chinese because for him the Chinese are a passive thing to be stared at; if he stares at the old lady in the next garden, she becomes active. He is forced to flee, in short, from the too stimulating society of his equals--of free men, perverse, personal, deliberately different from himself. The street in Brixton is too glowing and overpowering. He has to soothe and quiet himself among tigers and vultures, camels and crocodiles. These creatures are indeed very different from himself. But they do not put their shape or colour or custom into a decisive intellectual competition with his own. They do not seek to destroy his principles and assert their own; the stranger monsters of the suburban street do seek to do this.

Living in community day after day where we rub against those who are different in appearance, values, priorities, interests, habits and beliefs is ultimately the default position that God calls us to. Yes, he calls us to the ends of the earth too, but most of us live ordinary people in ordinary places, amongst other ordinary people to whom we are to witness of Christ.  This of course will be played out with other believers through our local church, it will be evident as we live the life of a neighbour in our street and it will be seen as we live together as families. We are to imitate Christ's humility as we live out our lives (Philippians 2:1-18)

This is challenging stuff!

1So if there is any encouragement in Christ, any comfort from love, any participation in the Spirit, any affection and sympathy, 2 complete my joy by being of the same mind, having the same love, being in full accord and of one mind. 3Do nothing from rivalry or conceit, but in humility count others more significant than yourselves. 4Let each of you look not only to his own interests, but also to the interests of others (Phil 2:1-4).

'The Tyranny and Challenge of Time' HERE

* HT: Thanks to John Smuts for pointing me to this quote