Home   And Just in CASE   Putting Christ back into Christmas
Christmas

Putting Christ back into Christmas 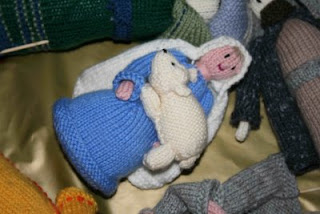 My wife Carmen knitted a wonderful Nativity set recently and our grandchildren have enjoyed playing with it and even retelling the Christmas story. Now while this photo might suggest a different telling of the story, I can assure you that they know the story well, and have done since they were very young.

But it seems that less and less people seem to know the story of Christmas; well at least the true story of Christmas. Some suggest that as few as 1 in 14 children know the real story of Christmas in 'Christian' countries like Australia. There is such limited knowledge of the story of Jesus birth that the story is constantly distorted. Greg Clarke wrote recently about this (here) and lamented that "Baby Jesus Christianity is what we see around us at Christmas; immature, unrealistic, comical, domesticated. It's Jesus without the Christ, the baby without the adult". In fact, for many people, they don't even get as far as the baby Jesus and instead focus on Santa and family celebrations. At this time of year we have a great opportunity to share the story of Christ with everyone. Let's do it in whatever way we can.

I've written a post on my Literacy, Families & Learning blog (here) about using literature to share the story of Christmas. The best place to start is obviously the Bible, but if you're a teacher, or you want to share the true story of Christmas with other members of your extended family or neighbours, then there are many good children's books that can be given away that also share the story of the birth of Christ. Not many get beyond the baby Jesus, but some do faithfully share the details of Jesus birth and the fact that he was and is the Son of God. 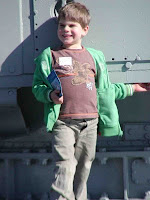 I heard Rowan Williams on radio today talking about a competition in Britain to come up with the shortest version of the Christmas story. I couldn't help but wonder why he wouldn't simply get people to read Matthew 1:18-25. This is what my 6 year-old grandson Jacob did recently when his teacher suggested they bring in their favourite story to read to classmates as part of end of year activities. He decided (himself) to take in his Bible and read Matthew 1 (minus the genealogy of Jesus which he didn't think the other Kinder kids would get).

This is how the birth of Jesus Christ came about: His mother Mary was pledged to be married to Joseph, but before they came together, she was found to be with child through the Holy Spirit. Because Joseph her husband was a righteous man and did not want to expose her to public disgrace, he had in mind to divorce her quietly.

But after he had considered this, an angel of the Lord appeared to him in a dream and said, "Joseph son of David, do not be afraid to take Mary home as your wife, because what is conceived in her is from the Holy Spirit. She will give birth to a son, and you are to give him the name Jesus, because he will save his people from their sins."

All this took place to fulfil what the Lord had said through the prophet: "The virgin will be with child and will give birth to a son, and they will call him Immanuel" —which means, "God with us."

When Joseph woke up, he did what the angel of the Lord had commanded him and took Mary home as his wife. But he had no union with her until she gave birth to a son. And he gave him the name Jesus. (Matthew 1:18-25)

I hope that supporters of CASE and readers of this blog have a wonderful and meaningful Christmas, as we remember, "For God so loved the world that he gave his one and only Son, that whoever believes in him shall not perish but have eternal life." (John 3:16). May the grace of the Lord Jesus be with you, Trevor