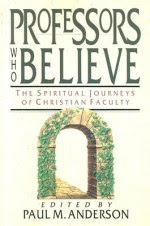 The personal testimonies of people of faith are always interesting. Paul M. Anderson's edited book 'Professors Who Believe: The Spiritual Journeys of Christian Faculty' brings together the testimonies of 21 professors drawn from a wide variety of disciplines and North American universities. The book is helpful in an age where New Atheists are increasingly claiming that the only truth is that which can be 'objectively' measured, that science and reason are virtually synonymous, and that faith and belief have no relationship to either truth or reason. It was published in 1998 and so is not a new book, but it is still a helpful book for Christians or those considering the Christian faith. Anderson writes in the introduction to the book:

Some argue that science and faith are antithetical because religion (1) involves no experiments, (2) tests no hypotheses and (3) is committed beforehand to a set of beliefs. I have not found such arguments convincing. First, science is a process that people use to understand the world, whereas religion addresses questions of purpose and meaning. Both science and religion are interested in truth. Science represents human efforts. Religion, especially the Christian faith, looks to revelation - i.e., God's initiative. Galileo Galilei, considered the father of modern scientific inquiry, captured the essence of this distinction when he stated that "the Bible tells us how to get to Heaven, not how the Heavens go."

Anderson who is a Biochemist and Molecular Biologist goes on to suggest that some of the postulates can in fact be tested. At least one of the professors in this book came to faith by testing a premise of the teachings of Jesus. He also reminds us that to accept science as objectively pure is a mistake. We should not simply afford a blind acceptance of purity and objectivity to science.  Anyone who has taught research methods at university (as I have) will know that the concepts 'objectivity' and 'subjectivity' are hotly contested. Anderson reminds us that Science is thought by some to be "...scholarship that is free from prior commitment to a particular answer or belief system. However, anyone with a few years experience in science knows that science is, in fact, often strongly influenced by pre-existing expectations."

However, this book is not an argument about objective truth, the objectivity of science and the scientific process, it is simply the story of 21 university professors and their reason for the hope that is within them. The book would be useful for Christians ministering to university students or who wish simply to encourage young Christians as they set off to university for the first time (as thousands will in Australia in coming weeks). It might also encourage other Christian academics to be prepared to share their own stories.

Now who is there to harm you if you are zealous for what is good? 14 But even if you should suffer for righteousness’ sake, you will be blessed. Have no fear of them, nor be troubled, 15but in your hearts honour Christ the Lord as holy, always being prepared to make a defence to anyone who asks you for a reason for the hope that is in you; yet do it with gentleness and respect, 16 having a good conscience, so that, when you are slandered, those who revile your good behaviour in Christ may be put to shame. (1 Peter 3:13-17)