Like all Australians I was shocked and saddened by the news that 18-month-old twins were found dead last week, weighing less than 4 kilograms. It appears they had probably been dead for over a week when found by an 11 year old sibling. The mother commented to police "I don't think I fed them enough". The likely cause of the twins' death was malnutrition. However, both parents have been charged with murder. Neighbours have been stunned. Their comments have included "We're shocked", “the kids were neglected”, “I wish I’d said more” etc.

A second case of alleged child neglect emerged this week with children as young as five found living in "unhygienic" conditions in the heart of Canberra. Three boys and a girl were taken away after being found home alone at a house littered with rubbish, dog bones and discarded toys, just a few kilometres from Australia’s Parliament. Their 35-year-old mother remains in police custody after yesterday being charged with four counts of neglecting a child and a charge of threatening to kill a person.


I could go on citing more examples, but it’s too depressing. As usual, we’ve had the same responses from the popular media blaming the Department of Community services for not acting sooner, asking when the government was going to do more, and interviewing family members and neighbours. Once again, some had little to say, some blamed others, a few expressed regret for not doing more when they noticed the obvious neglect.

It seems to me that we need to stop blaming everyone else for these terrible cases and begin to question how each of us look out for others in our communities. Yes, we also should rightly question the role that extended families play in supporting family members, but what do WE do? Do we accept some responsibility for other people’s children? Do we even know our neighbours? Could we recognise a case of neglect? Would we do anything if we did?

One of my colleagues from the United States, Professor of Early Childhood Education Lilian Katz, offered this comment some years ago on the community’s responsibility towards other people’s children:

The Greek philosopher Socrates some 400 years before Christ was born also saw the need to value children:

Could I climb to the highest place in Athens, I would lift my voice and proclaim, "Fellow citizens, why do you turn and scrape every stone to gather wealth and take so little care of your children to whom one day you must relinquish it all."

Parents have special responsibility for their own children, as do other family members, and there is a place for government and charitable agencies to support families at risk. But we all collectively share some responsibility in any community for the children of others, including strangers. While I’m not sure what Lilian Katz meant by the ‘good life’, the Bible points us ultimately to our relationship with God through Christ as the ultimate good. The good news of Christ leads to the ultimate good, being part of the Kingdom of God (Matthew 9:35). We should want this for our children and for other people’s children. As Katz points out, ultimately, the lives of our children and other people’s children in any community are interwined.

Jesus showed how precious children are and how important their future should be to us. He rebuked the disciples when they complained about parents who were bringing their children to him:

"Let the little children come to me, and do not hinder them, for the kingdom of heaven belongs to such as these." (Matthew 19:14)

Christ raised the status of children by this statement; revealing their worthiness. They are not mere ‘objects’ of pride for the parent, nor simply a resource to be utilized by the family; they are potential heirs of the kingdom of heaven!

How do we show that we value children?

We start by showing that we love our own children, by caring for them and nurturing them physically, emotionally and spiritually. Our families should demonstrate to others biblical patterns for family life. Our priority should be to see our children come to faith in Christ and to grow in their understanding of God and their desire to serve him all the days of their lives. 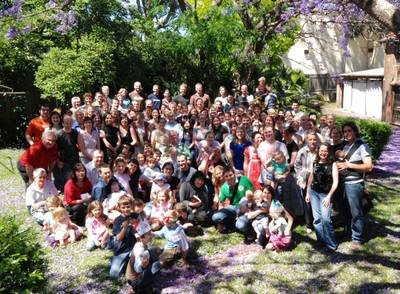 We will demonstrate it within the church in the way that we treat other people’s children; by caring for them and supporting parents to raise them to come to faith in Christ. We will treat children as potential heirs of the Kingdom of God and demonstrate this in the way that the church teaches, supports and loves them.

We will show it in the way we show concern for our neighbours children. We will hopefully notice cases of neglect and abuse and do something about it. Perhaps this will involve offering support of some type to the children themselves, particularly those who go to school with your own children, or who simply live in your street. It might involve reaching out to parents who need help. And in extreme cases, it might require you to speak to a government agency to suggest they intervene.