Home   And Just in CASE   New Abortion Laws in Victoria: Where does this leave us?
abortion Ethics Families medical ethics

New Abortion Laws in Victoria: Where does this leave us?

1. Divided reactions to the approval of Victorian Abortion Reforms

The State of Victoria's revised legislation on abortion was approved on Friday (10.10.08) without amendment (Melbourne Age report here).

Pro-choice advocates are pleased with this outcome pointing primarily to the fact that abortion has now been removed as an offence in the Crimes Act and terminations are now legal up to 24 weeks gestation.

Pro-life groups are deeply disappointed with the new laws pointing to the fact that the amendments while partly aligning Victoria with some Australian States, have now made terminations easier up to 24 weeks and even after this with the approval of two medical practitioners. The laws also make it more difficult for doctors who object to abortion on moral or ethical grounds, with the legislation requiring them to refer a woman seeking an abortion to another practitioner who doesn't have such an objection.

Pro-choice groups have argued strongly for the revisions to legislation on the following grounds:
Some of these issues might well be argued on the basis of equity for women and consistency across the states but I would note the following:
The debate has provided an interesting insight into community views on abortion and in particular, some of the key groups that have participated in the debate. There is no doubt that ethically it is an issue that divides many members of the community as some of the following responses indicate.

There have been many different voices in recent debate and many varied submissions to the Victorian Law Reform Commission's abortion law review. Here just a few.

Some accept the right of others to choose while arguing against abortion based on personal experience. For example, this article by Tracey Spicer argues that 24 weeks is too far advanced to allow a child to be terminated. Experiences like Tracey's are a challenge to those who want to make laws more liberal (read it here).

The Catholic Church continues to be a strong defender of the rights of the unborn based on medical, moral and ethical grounds. The Catholic Church has been one of the most vocal opponents of the Victorian reforms (read the Catholic Archbishop of Melbourne's submission here and media comments here).

The Australian Christian Lobby (ACL) has also been a vocal critic of any liberalisation of abortion laws, its submission argued for abortion to remain in the Crimes Act, governed by a tight interpretation of the Menhennitt Ruling (Read its submission here).

The Anglican Church in Victoria has been surprisingly neutral as the following extract from its submission suggests: "Our consensus view is the gradualist position....While we believe that the destruction even of an early embryo is of moral significance, we believe the moral significance increases with the age and development of the foetus. The significance increases gradually over time, in parallel with its physical development. As a pregnancy advances, more powerful moral reasons are required to allow the destruction of the embryo/foetus. It is more serious to consider destroying a foetus at 28 weeks than at 10 weeks. We would want to see this distinction noted in any legislative provisions, though we would counsel against a legislated absolutionist end-point after which an abortion could not proceed." Read its full submission here.

The Women’s Health Victoria (WHV) Council has welcomed the Victorian Law Reform Commission (VLRC) Law of Abortion Report (March 2008) as a comprehensive landmark document that it supports (Read their submission to the commission here).

3. Where does this all leave us? 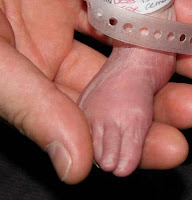 Let me say first that I know that there are genuine cases where pregnancy represents a threat to life for some women and where serious abnormalities discovered prior to birth leave parents with an awful choice to make. As Christians we need to be loving and supportive of women and men who find themselves in such circumstances (see Claire White's good comments on this in her Briefing Article "After the Silence: Dealing Christianly with abortion"). It is not our job to judge, but we must speak out if we have concerns. The issues are complex and the need for careful responses from the church has never been more important. We have been let down by some of these responses and non-response.

The Victorian legislation was an opportunity to introduce new legislation that at least addressed the latest scientific evidence in this area. While respecting the right of people to express different views in this area, I am disappointed that rarely is anyone (even large sections of the church) arguing for the rights of the unborn child. The latest data on survival of babies born prematurely, coupled with our knowledge of the extent of human development in the womb well before 24 weeks, would suggest that to continue to assume that the unborn child is not a child at all is an obscenity. It is a grave ethical inconsistency that the death of an unborn child due to violence against the mother, or even negligence in a motor vehicle (see for example here and here) can lead to criminal charges against the perpetrator (as it should), while our abortion laws in many states allow for almost total discretion on the mother's part, to terminate well beyond the point at which the child could survive outside the womb. As Nicole Starling commented in a blog post (here) on her blog 168 Hours:

"It seems difficult to explain why a father killing his child is 'foetal homicide' and a mother killing her child is legally sanctioned 'termination of the pregnancy'."

We do need to be actively involved arguing against abortion, not in a self-righteous way, but by arguing on moral and ethical grounds supported by hard facts that present the case for the unborn child (Don Carson has some good suggestions on how to do this here). My point in writing this post has not been to be judgmental and simply to take the high moral ground, it has been motivated by sadness at the rejoicing in the streets by some because it has now become that little bit easier in Victoria to terminate life. History will judge us badly when it considers that in Australia alone up to 100,000 abortions are performed each year.