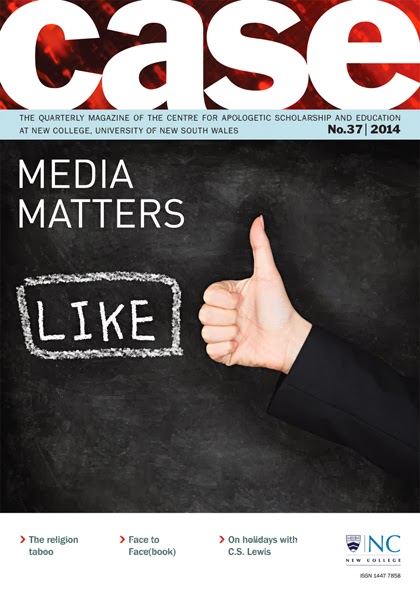 The latest edition of Case magazine is set to arrive in mailboxes this week. Our topic is 'Media Matters'.  Why? Because the media we engage with impacts what we do and what we think. It affects how we communicate and who we communicate with. In our varied contributions we reflect on how media is changing the world, and the impact—both good and bad—of those changes.

The first article is by Dr Jenny Taylor of Lapido Media, who discusses the ‘religion taboo’ within the news media. News stories are frequently written by journalists with little understanding of the religious issues involved, and some ignore religious factors altogether. Taylor looks at why this is, how it is changing, and what Christians can do to overcome religious blindspots.

The focus then moves to digital technologies—the new media. Facebook, Twitter, Instagram, Pinterest, YouTube, and the like. There is little doubt that digital media has changed the way we communicate. It has enabled the establishment of new forms of virtual communities. It has given voice to millions who would previously have found it difficult to share their thoughts and ideas. We see YouTube videos ‘going viral’ as funny, profound, and sometimes even banal images of life spread across the globe in hours. We observe music and books being self-published and promoted in ways that would never have been possible in the past. Individuals and groups like change.org use social media to influence public opinion and to lobby governments. And we have vast virtual stores of information, knowledge and images available globally from desktops and via varied media.

Yes media matters, and how it is used also matters. But there is a tension that has arisen as a result of the massive shift towards digital technology in the last five to ten years. Does this shift serve to enhance social engagement, or do the manufactured personae we inhabit online in fact undermine genuine relationship? Does it facilitate social activism, or an illusion that deceives us and others into thinking we care? Is the removal of constraints that embed us in ‘real’ social and moral contexts liberating or isolating? Do the dangers of being consumed by technology addiction and idolatry mean that Christians should avoid getting too involved, or is the greater danger that of becoming obsolete in a world that has moved on? These are some of the questions we need to consider.

Julia Bollen addresses the reality of the pervasive forms of media that are ‘always on’, and what’s more, ‘always-on-us’. She asks us to think about the impact of the extensive use of new social media, and argues that the Bible places a special importance on face-to-face relationships and our ordained nature as embodied communicators. Looking at a different aspect of social media, Justine Toh exposes the emptiness of its role as a,

‘court of public opinion where we crowdsource notions of justice, right, and what are acceptable or unacceptable views’.

In her view it is simply an aggregate of individual free choices, isolated from any context against which good choices can be made. 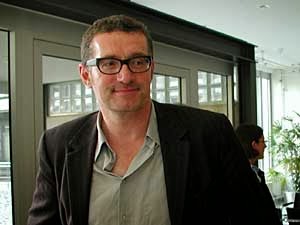 Scott Stephens (well-known ABC media presenter and writer) offers an insightful critique of the art and assumptions of Thomas Hirschhorn. Hirschhorn claims that his art, consisting largely of disturbing images of human carnage resulting from war and trauma, is an attempt to remove the artist-as-mediator to allow the viewer to genuinely engage with a reality usually censored by mainstream media channels. Stephens seeks to turn Hirschhorn’s argument on its head by revealing that his presentation of reality comes with its own form of mediation. In counterpoint, Stephens considers the transformative power of the often gruesome religious images of Christ and martyrs, which, he suggests, have an integrity and connection to deep truths absent from the work of artists like Hirschhorn.

In a short essay and interview, David May highlights the potential digital media has for the church in building up believers and reaching non-believers. The practical essay argues that as Christians we,

‘are privileged to communicate the greatest message of all, so it's worth embracing technology and media for the sake of the gospel’.

In a brief interview David also explains how he has implemented some of these ideas in his capacity as communications director with his church.

Finally, this issue also includes a fascinating exploration by New College staff member Jonathan Billingham, who considers archetypal narratives and how they can be used by Christian artists. He illustrates his brief essay with his composition, 'Servitude'. A final segment—‘On holiday with C.S. Lewis’—is a collection of short reviews and reflections on the life and work of C.S. Lewis, testament to his ongoing influence on Christians today.

If you are not a subscriber to Case you can always read one or two articles free online from our website or you might sign up to receive your own quarterly edition in paper or digital form for as little as $20 per year. Subscribe HERE.