The case of Christian Rossiter

A significant legal judgement is about to be made in the Supreme Court in Perth (Australia) to determine whether a nursing home should be allowed to stop feeding a quadriplegic man. This tragic story had its beginning when a perfectly healthy 49 year old man, Christian Rossiter, was hit by a car and developed spastic quadriplegia. He is now fed through a tube in his stomach and wants to end his life. He has asked for the nursing home to stop feeding him. He says he is in a living hell with no control over his body. In making a testimony to the court he stated:


"I'm Christian Rossiter and I'd like to die. I am a prisoner in my own body. I can't move. I can't even wipe the tears from my eyes."

The staff in the nursing home are in effect asking, at Mr Rossiter's request, to be allowed to kill him, not just let him die. This is because the Criminal Code in Australia makes it clear that if there is somebody in your care and they can't remove themselves from this care, that you are obliged to provide them with what is necessary to sustain life. This is a very sad and tragic story, and no doubt many people will want to say, let this man have his wishes granted, but there are tremendous legal and ethical consequences that will flow from such a decision. I will allow the lawyers to deal with the legal issues, but every person has a responsibility to consider the ethical issues that the request from these nursing staff raises.

'Matters of Life and Death' by John Wyatt

Professor John Wyatt has written a helpful book that addresses this particular type of ethical issue. The book called 'Matters of Life and Death' has been around since 1998, but there are few publications that are as good. The strength of the publication is that it has been written by paediatrician who, like all medical practitioners, has been faced with decisions that have consequences for the life or death of patients. He writes as a Christian who tries to apply his faith and the Bible to the ethical dilemmas that he and other medical practitioners face every day. He challenges all of us (not just medical practitioners), to think about these issues. He addresses the very issues raised for Mr Rossiter's carers in his chapter on euthanasia and assisted suicide and suggests that:

‘Death like the sun, should not be stared at.’ So said the French philosopher…Yet advances in medicine force us to do just that. Of course, all generations have discovered that they cannot evade the reality of death. But if we are going to develop an authentic Christian response to the issues of euthanasia and medically assisted suicide, we need to stare at death with renewed intensity. We need to stare at its mystery and awful finality, at the questions and fears that it raises, and at our own mortality….death and dying are not just ‘out there’ as abstract theoretical issues. Death is in our midst.’ (p.169) 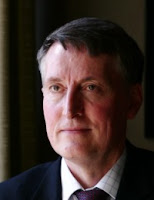 New College has invited Professor Wyatt to present its 2009 annual lecture series that we have titled 'Bioethics and future hope'. This series of three public lectures will be presented on the UNSW campus from the 8th to 10th September. They will address the ethical dilemmas faced by our times and offer biblical insights into how we might cope much better with these and make right choices.


He offers this challenge as an introduction to the series:


"Our understanding of the future changes the way we think about our ethical responsibilities in the present. The secular perspective derived from the Enlightenment sees the future as a human construct, an artefact created by human ingenuity. In contrast, the neoplatonic future offers the hope of an escape from the material world into the timeless realm of the spirit. The biblical view of the future provides a third radical perspective. The future is not a human artefact; it is a reflection of the loving purposes of God. Yet the physical nature of our humanity is not obliterated, it is affirmed and vindicated. For Christians, future hope lies not in being released from our physical bodies, but in becoming the people we were meant to be.”

There will be MP3 recordings made available after the lectures on the New College Website. The details for those able to attend the lectures follows.

Details on the 2009 New College Lectures 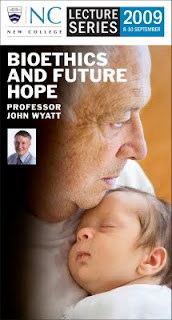 Dr John Wyatt is Professor of Ethics & Perinatology at UCL. He has a clinical background as an academic neonatologist working on the mechanisms, consequences and prevention of brain injury in critically ill newborn infants. His work is now concentrated on ethical issues raised by advances in reproductive and medical technology at the beginning of life, research ethics and governance and the philosophical basis of medical practice.

How do different conceptions of the origins of the cosmos impact on current bioethical debates? What does creation order imply about reproductive technology, parenthood, and the intrinsic value of human life?

The minimization of suffering is central to the moral vision of utilitarianism. How does the Easter story transform perceptions of suffering and how does this impact on current bioethical controversies about assisted suicide, euthanasia, ageing and degenerative diseases?

The Enlightenment project aims to create better humans by the use of technology. How should be respond? What are the implications of the Christian hope for bioethics? How should we treat our patients now in the light of the future?

PLEASE NOTE - RSVP is essential for all lectures by Friday 4 September 2009. Full details, venues and directions can be found HERE.