Marriage As Covenant Not Contract

I've just returned from the wedding of two former members of the New College community. It is a Christian residential college at the University of New South Wales. Every part of the wedding ceremony was a wonderful reminder of the fact that marriage is not simply a legal agreement between two people. The message delivered by the preacher, the words of Scripture that were read, the vows taken and the promises made by the young couple, all pointed to the fact that they were not looking simply to sign a simple legal contract of marriage.

Many people enter marriage today as a way to sort out the legalities of a long-term relationship and in order to give shape to their obligations and rights in the relationship. Of course, for those who choose to enter into a legally binding marriage outside of a church marriage, there may well be little more intent than this, and even this limited function has some social benefit. But the Bible teaches that marriage was meant to be so much more. As Gordon Menzies reminds us in an article he wrote for an edition of Case Magazine on the theme 'Family Foundations', marriage is meant to be a covenant between a man and a woman, not simply a legal agreement that entrenches rights, obligations and responsibilities. He wrote:


"...the starting point for the covenant understanding of marriage is not the gains from marriage, but the relationship between man and wife, the ‘inner commitment’ of the couple to each other in self-giving love (Greek: agape), involving openness to each other - emotionally, psychologically, sexually and spiritually. This is a relationship for life: as the Anglican marriage service puts it “for better for worse, for richer for poorer, in sickness and in health, until death do us part”. An exclusive sexual relation is central to this relationship, primarily as an outward expression of the inner commitment of the couple. In this understanding, any productive ‘gains’ from marriage, and even procreation, are marital ‘goods’, by-products of the relationship, and are shared by the couple on the basis of their love one for the other. Bargaining over the gains is completely alien to this model. Moreover, the marriage would still be valid if there were no productive gains (or even losses), or if one of the partners experiences a net loss of real income through the marriage. The marriage is defined solely in terms of the relationship between the partners, and not at all in terms of the ‘gains’ and how they are shared."

Menzies reminds us that the Bible stresses that marriage promotes a number of things, including relationship (Genesis 2:8), procreation (Genesis 4), social order (Genesis 2:24), sexual intimacy (1 Cor. 7:3-7) and the provision of 'material goods' (to use an economics term) that meet the needs of the couple (Gen 1 and 2). But unlike a simple contract, the marriage covenant involves a solemn promise by a man and woman before God, that reflects their ‘inner’ being, not just the assent of their minds. 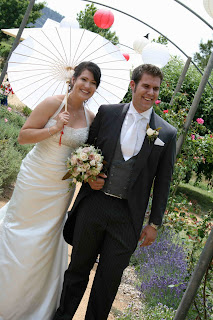 As Kim and Lachlan embarked on marriage today, there was no doubt that they were entering into a covenant relationship before their God. There was no doubt that this was an unqualified commitment, and that in their vows they were committing themselves to a relationship that they hope will survive all the circumstances of life (‘for better, for worse, for richer or poorer’). This is not relationship where the expectation is that it can be cancelled as soon as one of them fails to fulfil their obligations. This is a relationship that is a reflection or echo of the relationship between God and his people (Ephesians 5:29-32). The implication is that the marriage covenant demands complete faithfulness of the man and the woman irrespective of the material good that they receive from the relationship. This is a tough requirement not to be entered into lightly. In contrast, the marriage contract can easily be seen as something that can be broken as soon as rights and obligations are not seen as being met. The Christian marriage is until death us do part, whereas the marriage contract is until either of us has had enough.

I praise God for the precious gift of marriage and young men and women like Kim and Lachlan who enter it with their eyes open and the highest expectation that in this precious institution they might bring honour and glory to God.