This post has been written by Greg Thiele, an Associate of CASE and a regular contributor to the CASE blog 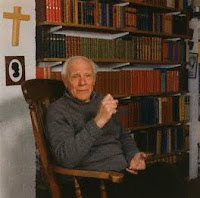 Malcolm Muggeridge was one of those extraordinary individuals whose thought and writings cast a spotlight on many of the concerns and issues of their age. For Muggeridge, the age in question was the twentieth century. He lived through most it (1903 – 1990), and given his various roles (writer, journalist, editor, soldier-spy and media commentator, among others), was perfectly positioned to record and comment on the events, trends and follies of that momentous passage of human history.

Muggeridge was born in London, the son of a Labour politician, and his own early political leanings were decidedly left wing. He was brought up, he later wrote, to believe in the religion of the age: utopianism, and one of his early ideological flirtations was with Soviet Communism. In 1932, having been employed as a freelance journalist by the Manchester Guardian, Muggeridge and his wife, Kitty, settled in Moscow, with a view to living there permanently. It didn’t take long for disillusionment with the Soviet system to set in – the start of a gradual shift away from a belief in the politics of the left as the great way forward for humanity.

During World War II, Muggeridge was active in the British Secret Service. After the cessation of hostilities, he worked as journalist or editor on a number of British newspapers and magazines. In due course he became active in the electronic media as a radio and television commentator.

In his early and middle adult years, Muggeridge achieved a reputation as a drinker and womaniser. This began to change in the 1960s, however, as his writings and other pronouncements revealed a growing commitment to the ideas and ideals of Christianity. Having earlier claimed to be an agnostic, Muggeridge, from the early ‘60s onwards, produced a collection of books, essays and other writings affirming his faith in Christ. Increasingly, Muggeridge came to express contempt for what he saw as the spiritual barrenness of contemporary thought and life, particularly as exemplified in the popular culture and mores of the day, and for ideas of human progress in general. In so doing, he made himself widely unpopular – not least with many leaders of the British religious establishment.

Malcolm Muggeridge defies easy categorisation. While left-leaning politically early in life, and then becoming disillusioned with the socialist agenda for human betterment, to say that he moved progressively to the right is a misconception. He had a deep-seated disbelief in all human agendas, including the attempts to create a “kingdom of heaven on earth” with which the twentieth century was littered. He was, therefore, a man out of step with his times in early adulthood, yet can be seen as having been prophetic in his dismissal of such agendas, as the various attempts to create economic and social utopias came to their (mostly ignominious) ends late in the century; or only managed to stay upright by means of fierce suppression of human rights.

In terms of his religious beliefs, too, Muggeridge is not easy to pin down. In his essay 'Am I a Christian?' he comes to the conclusion that the answer to the question depends on one’s definition of “Christian”. On the one hand, he considered himself enormously privileged to be counted among certain of his heroes (the “small, sublime band” as he often referred to them: writers and thinkers such as Tolstoy, Dostoevsky, Bunyan, Pascal, William Blake and Simone Weil). Yet if it meant being lumped in with, for instance, most of the leading figures of the Church of England of his day, he was delighted not to be associated with such people even in name! 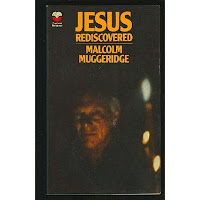 'Jesus Rediscovered' was published - a collection of essays and other pieces (the title being derived from Muggeridge’s feeling that in some sense he had always belonged to Jesus, but had for most of his life resisted His call). Muggeridge described the content as “the effort of one ageing twentieth-century mind to give expression to a deep dissatisfaction with prevailing twentieth-century values and assumptions, and a sense that there is an alternative – an alternative propounded two thousand years ago by the Sea of Galilee and on the hill called Golgotha”.

The form that “expression of dissatisfaction” took was often highly critical (albeit extremely witty). Science he saw as the “particular fantasy” of his age. “A seventeenth-century man like Pascal”, he wrote, “though himself a mathematician and scientist of genius, found it quite ridiculous that anyone should suppose that rational processes could lead to any ultimate conclusions about life, but easily accepted the authority of the Scriptures. With us it is the other way round”.

The spirit of protest that burned so strongly in the ‘60s received short shrift from Muggeridge: “Public benevolence can never be a substitute for private virtue; it is more important, and more difficult, to check one outburst of temper, however trivial, than to engage in any number of public demonstrations against collective brutality and injustice”. 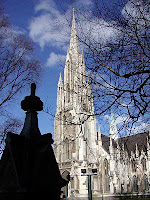 Institutional Christianity, by and large, did not fare a great deal better. The Church of England of his day he saw as being so ineffectual as to be little more than a joke; and upon the notion of ecumenicalism he heaped scorn. In the essay 'Consensianity', written after a visit to the World Council of Churches at Uppsala, Sweden, in 1968, Muggeridge noted that “the most vital elements in the Christian story have…derived from dissidence, rather than agreement – St Francis, Ignatius Loyola, Luther, Pascal, Wesley, Kierkegaard, etc. At Uppsala…they were able to agree about almost anything because they believed almost nothing”.

The churches – in the West, at least – had concentrated on their social responsibilities while ignoring the spiritual, Muggeridge felt. In so doing, they had effectively signed their own death warrant: by proclaiming that a better world was worth seeking, and indeed attainable, they couldn’t fail to be involved in the subsequent disillusionment when it turned out not to be the case. The language of mysticism and transcendentalism, on the other hand, “had ceased to be comprehensible”.

Are Muggeridge’s thought and writing relevant for us today? Thirty or more years since the bulk of his literary output was published, a certain amount of what he had to say has no doubt lost a measure of relevance. Nevertheless, there is much, I believe, that will repay rereading – or reading for the first time – by Christians now; for at the centre of Muggeridge’s message, from first to last, is the person of Christ, and his Kingdom which, ultimately, is “not of this world” (John 18:36).

Muggeridge saw life in terms of an endless drama between the competing forces of the Will and the Imagination. Out of the Imagination come love, understanding and goodness; out of the Will: lust, hatred and power. Those belonging to the former will be saints, mystics and artists; to the latter belong power maniacs, rulers and demagogues. Muggeridge saw these two forces as struggling for mastery in each individual soul. In a piece called 'Credo', he writes: “One is of darkness and one of light; one wants to drag us down into the dark trough to rut and gorge there, and the other to raise us up into the azure sky, beyond appetite, where love is all-embracing, all encompassing…”.

For Muggeridge, the Christian religion “has expressed this ancient…dichotomy in terms of breath-taking simplicity and sublimity…I believe, as is written in the New Testament, that if we would save our lives we must lose them; that we cannot live by bread alone; that we must die in the flesh to be reborn in the spirit…”.

Like many of his famous exemplars, Muggeridge had an unorthodox understanding of the gospel. He described himself as a “theological ignoramus”, and expressed impatience with, or even indifference to, creeds and dogma of all kinds. Despite the unconventional nature of his beliefs, however, it is possible to see Muggeridge as someone whom God used in shaping a message for his times, and ours.

For those of a naturally skeptical disposition, Malcolm Muggeridge can perhaps be seen as a kind of patron saint. While “seeing only fitfully”, and “believing no creed wholly”, he was able to say, finally, of Jesus: “At the intersection of time and eternity – nailed there – you confront us; a perpetual reminder that, living, we die and, dying, we live. An incarnation wonderful to contemplate; the light of the world, indeed”.

Some other publications by Malcolm Muggeridge

2. 'Conversion: The Spiritual Journey of a Twentieth-Century Pilgrim' (here)