Late Night Habits and the Mental Health of Young Adults 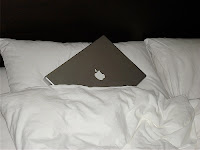 I've written previously on this blog about the challenge of making good use of time. In my post 'The Tyranny and Challenge of Time' I cited the 2009 OECD Social Indicators report that has shown Australians spend less leisure time with friends than just about everyone. I also wrote some time ago about 'Time and the Family' and in particular how families are spending less time together including a reduction in eating meals together.  Finally, I have written about the impact of 'Children's Loss of Play', including its impact on them and the things they might be learning about rest and work.

Our inability to manage time seems to be an increasing challenge in an age when ironically we have so many technology applications that reduce travel times, remove much of the domestic drudgery of past ages and increases our opportunities to use time well. There is no doubt that we are living in an age where we are busy beyond what is good for us and that this can have an impact on others.

A recent research study has raised new fears about the way young adults (aged 17-24) use their time, and in particular the way their sleep habits are affecting their mental health. 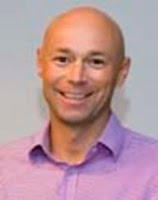 Associate Professor Nicholas Glozier from The George Institute for International Health, University of Sydney, Sydney has led a team of researchers to examine the impact of sleep deprivation on the mental health of young adults. The results are worrying. The findings were published in September in the journal 'Sleep'. Just over twenty thousand young adults (aged 17-24) were randomly identified through the state vehicle licensing authority and surveyed. A random sample of 5,000 people was then chosen for follow-up interviews 12-18 months later. There were 2837 who provided complete data.

What the study showed is that about 25% of young adults are affected by psychological distress, which is defined as poor mental health comprising common symptoms of low mood and anxiety. As well, a considerable proportion of young adults who indicated some level of distress in the first stage of the study went on to develop more severe mental disorders, recurrent episodes and the associated negative effects of this, including suicide attempts, self harm and welfare dependence.

In relation to the amount of sleep young people have:
Psychological distress was also associated more strongly with the female gender (40% versus 28% in males), unemployment (33% versus 28% in the employed), drug use (45% versus 32%), harmful alcohol use (38% versus 32%), high sensation seeking behaviour (44% versus 22% in lowest category) and recent deliberate self-harm (70% versus 31%).

This study's findings suggest that recent increases in the levels of distress reported by young adults may be related to changes in their sleep patterns.

"The increased reporting of stress seen in many countries over the past decade or two in this young adult population may reflect lifestyle or other changes that lead to too few hours of sleep." 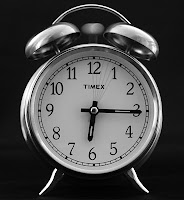 The researchers also report that shorter sleep duration in younger age groups is associated with a number of factors including increased television viewing, computer gaming, and Internet use.  All of these appear to be becoming more commonplace, with young people communicating with each other late into the night, gaming, updating their Facebook and so on. While we have become accustomed to young people wanting to stay up late and rise later, this research suggests that wake time is not changing much through the week due to school, university or work commitments. This has the net effect of reducing sleep.

Making Sense of these Issues

It seems that young adults are not managing their time well and as a consequence, they may be losing valuable sleep time with disastrous consequences for their lives. This troubles me because my suspicion is that there is a relationship between the topics of all of my posts on time and its use.  What is common?
Robert Banks suggested in his book 'The Tyranny of Time' we need to reclaim and rethink the way we use our time. The solution is not to drop out of society, to take extended breaks between periods of excessive pressure and time stress, nor is it just the application of self-help strategies.  Rather, we need to look at the deeper issues that drive the way we use time. Are our priorities in life distorted and driven by things that get in the way? In biblical terms these would be seen as idols, that is, something that attains such prominence in our lives that it supplants the central place that God and his purposes should have in our lives. The Bible teaches that we were made to centre our lives on God not other things. Study, work, friends, games, families, while in and of themselves are good, can distract us from what we designed to be if they assume a dominant place in our lives. We are commended to serve the living and true God (1 Thessalonians 1:9) and avoid those things that distract us from this. It is in turning to Christ that we will achieve true meaning and purpose.

What can we do about this?

Associate Professor Glozier and his colleagues are trying to devise clinical methods to help young people.  Patients are being treated with light therapy in the mornings and hormones such as Melatonin to help them sleep earlier. While these things will no doubt help those whose lives have developed psychological distress, there are more fundamental things that we can do before problems develop.

What are some of the basic things that all parents, teachers, bosses, brothers and friends can do to help?  It seems to me that in life one of the most significant influences on us are other people and the examples they set for us. We need to start with our own lives and begin to set new examples. As parents we may also need to be much more proactive in moderating our children's behaviour at younger ages and not placing burdens on them that inadvertently may drive them towards unhealthy pressures to study, work, succeed and be successful in everything.  Parents might ask the following basic questions:
While my focus in this post has been on young adults, and the responsibilities of parents, I could just as easily have turned the focus on workers and their leaders, church members and their pastors and so on.
Writing this post has led me to engage in much self reflection about the priorities I have in my own life. I would encourage readers to do likewise.
Other Resources
Nicholas Glozier and others (2010). 'Short sleep duration in prevalent and persistent psychological distress in young adults: the DRIVE study', Sleep.