Home   And Just in CASE   Is the Internet dumbing us down? 2 rite!
communication Internet

Is the Internet dumbing us down? 2 rite! 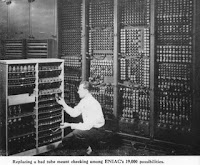 I'm a 57 year old academic who has always been an early adopter of technology. I bought my first personal computer in 1982, I began using email as a replacement for letters and memos 20 years ago, I currently write three blogs, maintain my own website, and yes, have even been dragged (kicking and screaming!) by the residents of New College Village to join Facebook. So don't dismiss my comments as those of a technological Luddite. I love the Internet and use it many times almost every day.

But like many people I face the daily challenge of making sure that there is balance in my life, that blogging doesn't move from being a useful and stimulating way to learn and communicate ideas, and instead become a new form of addiction that harms my relationships and diverts me from more substantial and important activities. I have concerns that arise from my academic work in language development (here) about the impact of the Internet on people's lives and our ability to learn, think, read and write. But this post isn't arguing against the Internet and its many applications for communication, it is simply sharing my concerns and those of others about its application and misuse.

Concerns about the Internet

There have been a number of people who have questioned the Internet's impact on us in recent times. In an article in The Atlantic (here) Nicholas Carr asks, "Is the Internet making us stupid?" He comments:

....what the Net seems to be doing is chipping away my capacity for concentration and contemplation. My mind now expects to take in information the way the Net distributes it: in a swiftly moving stream of particles. Once I was a scuba diver in the sea of words. Now I zip along the surface like a guy on a Jet Ski. 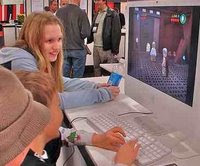 We already know that online reading is different (see my post on this topic here), that we scan the screen in different ways and spend much less time reading single texts online than when we read books. In other words, we read quickly and in more shallow ways rather than engaging in close 'deep' reading (I've probably lost some of you already). But beyond simply being a different way to read, could the extent to which we read and write online have a negative impact on us as readers and learners? While the jury is still out, some researchers think so.

For example, Mokoto Rich (Literacy Debate: Online, R U Really Reading?) points to evidence from Neurological studies that show that learning to read changes the brain’s circuitry. As well, there is more recent speculation that reading on the Internet may also affect the brain’s hard wiring in a way that is different from book reading. Dr Guinevere Eden director of the Center for the Study of Learning at Georgetown University, acknowledges that this is probably occurring and suggests that:

The question is, does it change your brain in some beneficial way? The brain is malleable and adapts to its environment. Whatever the pressures are on us to succeed, our brain will try and deal with it.

There are many claims that people are reading less substantial texts and writing less extended texts. Robert Fisk amusingly claims "everyone wants to be an author but no-one is reading books". He is a basic technology user but curses its impact on him and others:

I blame technology. The internet, email – neither of which I use – and the accursed laptop. I curse the laptop for two reasons. Firstly because I use it. Secondly because it encourages hopeless authorship. It's not that everyone with a laptop thinks they can write a book. The problem is that everyone with a laptop does write a book. They arrive by the dozen, in my Beirut mail bag, unsolicited on my Beirut doorstep, in my European mail. A few are brilliant. Most are awful. They are packed with misspellings, bad grammar and often pseudo-anthropological jargon.

I guess I'd add, and if people aren't writing books they're writing blogs, sending constant SMS messages or even sending constant 'tweets' via Twitter. This might in many cases be good, but for some it may well be unhelpful.

I wrote a post on 'Twitter' about a year ago on my 'Literacy, families and learning' blog (here). At the time I was horrified to think that we might be heading towards an even more banal form of social networking. Twitter seems to reduce communication to the sending of short, often poorly written, trivial texts that we expect others to read. For the uninitiated, Twitter is one of a number of microblogging tools that ask users to tell friends what they’re doing in 140 characters or less. It's a social networking service that allows users to send updates (known as ‘tweets’) that are text-based posts to their friends or strangers for that matter.

While I can see why some of my academic colleagues would welcome the prospect of young people writing constantly to one another and the fostering of the ability to write precise texts, it's difficult to see much that is good about Twitter. If you think Carr was tough on the Internet, this is what he says about Twitter:


And what exactly are we broadcasting? The minutiae of our lives. The moment-by-moment answer to what is, in Twitterland, the most important question in the world: What are you doing? Or, to save four characters: What you doing? Twitter is the telegraph of Narcissus. Not only are you the star of the show, but everything that happens to you, no matter how trifling, is a headline, a media event, a stop-the-presses bulletin. Quicksilver turns to amber.

Maybe this is a bit harsh, I’m prepared to accept that Twitter might just be a useful networking tool for some people. It might help some to keep in touch easily while they are doing other things. But I'm confident that it has greater potential to do harm than good for some people.

Let me preface my concerns by stating once again that the Internet isn't the problem, it's what we do with it that matters. For example, I'd offer the observation that some of the people I know who are very active users of the Internet are also well read and they write extended texts for publication in non-online publications. But while I welcome the Internet and just about every new clever way we are creatively applying it for learning and communication, I have three key concerns:

Does it waste too much time? The Internet and in particular social networking and blogging, is soaking up so much of our time that it could be at the expense of other relationships and responsibilities. I wrote recently on this blog and asked the question "might bloggers be robbing their employers (here) of time by blogging at work?" I could extend this question. Might we be robbing our family of time? Might we be engaging in social networking at the expense of the development of a small number of significant relationships? Do we spend so much time online that we don't have time to phone or visit friends, family or neighbours? In fact, how might we be robbing God of time?

Could all this online work affect us as readers, writers and learners? Because the Internet requires a different way of 'reading', might it be changing the way we think? At the very least, might it be adversely affecting our literacy habits? Might it be diverting us from 'deep' reading of substantial texts? Could it be making us proficient at writing blog posts that don't exceed 800 words and messages that don't exceed 160 (or 140 for Twitter) at the expense of other forms of writing that have more lasting value? It is not the Internet that is at fault here, but the forms of writing and reading that it might encourage to excess. I can recall how deskilled I felt when I finished a stint as Dean of a University faculty in the 1990s. In the role I dictated and wrote 20+ memos each day and attended countless meetings. When I went on sabbatical leave at the end of my term to write for 6 months, it took the best part of three months to re-train myself in basic scholarship, to be able to read for sustained periods, and to write long and substantial texts. I see blogging, Facebook, Twitter and so on, as having the potential to do the same thing.

They above are my worried thoughts, I'd welcome your responses if you've made it this far.

'The impact of new media on children' (here)