This post has been written by Greg Thiele, an Associate of CASE and a regular contributor to the CASE blog
In 1945, English comic novelist Evelyn Waugh completed what was to become his most successful and popular work: Brideshead Revisited. Waugh, a Catholic, indicated that the theme of the novel was “the operation of divine grace on a group of diverse but closely connected characters”.

(It should be noted in passing that the Catholic understanding of grace differs – significantly, at points – from the evangelical one. There is not scope here to consider such differences; but in any case, the essential notion of grace – God’s free, unmerited favour and blessing – seems to be at work in the novel in a way that most evangelical Christians would recognise.)
The novel describes the dealings of the main character, Charles Ryder, with the aristocratic Flyte family.  Ryder, a disillusioned WWII army captain, finds himself unexpectedly back at Brideshead, the Flyte family’s stately home, where, in flashback, much of the action of the novel takes place. He recounts his friendship, at Oxford, with the troubled younger son, Sebastian, and his relationship with other members of the family, including his eventual romance with Julia, the beautiful elder daughter.
The young Charles is an agnostic, dismissive of the “narrative” of the Christian faith, and finds the Catholicism of the Flytes incomprehensible. The Flytes themselves represent a wide range of levels of faith and piety. The paterfamilias, Lord Marchmain, had effectively been forced to convert to Catholicism in order to marry Teresa (Lady Marchmain). When we first meet Lord Marchmain, we find him estranged from his wife and living openly with a courtesan in Venice, with a deep hostility towards both his adopted faith and his spouse. Lady Marchmain, on the other hand, is “popularly believed to be a saint”. The elder son, also named Brideshead, and the younger daughter, Cordelia, reflect their mother’s faith. The other son and daughter, Sebastian and Julia, physically alike, are similar also in their problematic relationship with the family religion. 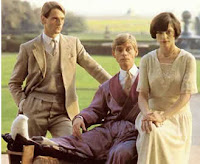 As Charles’s friendship with Sebastian develops, we find the latter sinking into alcoholism and depression: a result, it seems, of his inability to deal with the demands and expectations of his family – especially those of his mother – exacerbated by issues of personality and character. For Charles, the magical world of wealth and privilege which he had entered through his friendship with Sebastian evaporates when he is dismissed by Lady Marchmain, due to having given Sebastian money to support his drinking habit. “Henceforth”, decides the young Charles on leaving Brideshead for what he assumes will be the last time, “I live in a world of three dimensions - with the aid of my five senses”. The older Charles, the narrator, ironically affirms that he has subsequently learned that “there is no such world”.
Ten years pass. Charles is married, though estranged from his adulterous wife. It is thus that he meets, for the first time in many years, Julia, who by now thoroughly regrets her own foolish, early marriage to the absurd Rex Mottram – a self-made man and politician who is the butt of a good deal of the novel’s humour. Julia’s marrying Rex had entailed her officially rejecting her religion, due to his having already been married and divorced. Charles and Julia embark on an affair, and in due course find themselves living together at Brideshead.
The novel’s climactic episode involves the return of Lord Marchmain to Brideshead, and his eventual death (Lady Marchmain having died several years earlier). In scenes of heightening tension, watching her father die, Julia gradually comes to see that she cannot continue to live her life in rebellion against God: trying to “set up a rival good to God’s”, as she later puts it. Kneeling at the foot of her father’s bed, she prays that he will give a sign that he repents and accepts God’s forgiveness.
A priest is in attendance to administer the last rites – the same priest whom Lord Marchmain had some weeks earlier sent packing. Charles challenges the priest: “Father Mackay,” I said. “You know how Lord Marchmain greeted you last time you came; do you think it possible he can have changed now?” Father Mackay responds:”Thank God, by his grace it is possible.”

It is while witnessing Julia’s anguish that Charles begins to sense in himself the need to receive the same grace and forgiveness for which she is praying on her father’s behalf. Almost in spite of himself, he kneels behind the woman he loves, and prays the simple prayer:”O God, if there is a God, forgive him his sins, if there is such a thing as sin“. In a scene of extraordinary power and pathos, Julia’s prayer (and, we may assume, Charles’s) is answered.

Father Mackay’s parting words to Charles are illuminating: “I’ve known it happen that way again and again. The devil resists to the last moment and then the Grace of God is too much for him”.


Back in the present (“one grey morning of war-time”), his reverie past, Charles pays a visit to the small chapel on the Brideshead estate. There he prays (“an ancient, newly-learned form of words”), and begins to understand the purpose of the “fierce little human tragedy” in which he had played a part. The Holy Spirit is like the wind, blowing “wherever it pleases” (John 3:8) – and God’s grace will manifest itself in the most unexpected ways and situations.
At one point in the novel, Lady Marchmain reads from one of G.K. Chesterton’s “Father Brown” stories, which speaks of God’s kindness and mercy in holding on to those who wander away from him: “I caught him (the thief) with an unseen hook and an invisible line which is long enough to let him wander to the ends of the world and still to bring him back with a twitch upon the thread”. Such is God’s irresistible grace. For those of us whom God has called, but who at various times in our lives have wandered far from him, such a thought - the essential message of Brideshead Revisited - is immensely comforting.