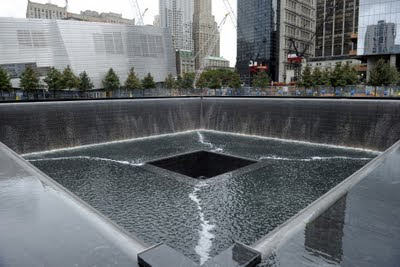 The 9th of September 2001 was a day of horror millions of people around thew world. I sat in my 'safe' suburban home in Sydney late one Tuesday night watching the late night news with my daughter who was 21 at the time. It was an ordinary sort of day, I had just returned from Sydney Missionary Bible College, where I was doing some study, and she had been doing some university work that night. The news was interrupted by reports of a plane hitting a building in New York. What followed was two hours of television horror as we watched the dreadful events unfold.

The memories and shock are still vivid, how much more so for the people directly affected by the tragedy and who were living in New York, Washington or Shanksville Pennsylvania. But in some way everyone who watched those events has been affected in varied ways. The impact continues.

The images below capture the events of the week before, at the time of the attacks and since the tragedy of that day.

A 'Hat Tip' to 'TRIABLOGUE' for pointing to these photos from The Atlantic: In Focus with Alan Taylor. Alan originally created them when he worked at The Boston Globe: The Big Picture

Two Psalms come to mind on this memorial day, Psalm 23 and Psalm 77

1The LORD is my shepherd; I shall not want.
2He makes me lie down in green pastures.
He leads me beside still waters.
3He restores my soul.
He leads me in paths of righteousness
for his name’s sake.

4Even though I walk through the valley of the shadow of death,
I will fear no evil,
for you are with me;
your rod and your staff,
they comfort me.

5You prepare a table before me
in the presence of my enemies;
you anoint my head with oil;
my cup overflows.
6Surely goodness and mercy shall follow me
all the days of my life,
and I shall dwell in the house of the LORD
forever.

HT: A 'Hat Tip' to 'TRIABLOGUE' for pointing to