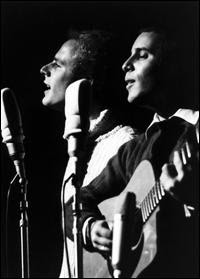 Carmen and I went to see Simon & Garfunkel in concert on Tuesday Night. This iconic musical duo responsible for so many great songs in the 1960s and 70s reunited recently for a limited 'Old Friends' tour of New Zealand, Australia and Japan (here). Whether this is the beginning of a more substantial reunion is unclear but we weren't going to miss the chance to see them together again. However, Art Garfunkel's last words on stage after the 3rd curtain call were "Ask us to come back and we'll do it again". So who knows.

The crowd as you'd expect was decidedly 'more mature' with probably 95% baby boomers and a sprinkling of younger fans who probably first heard Simon and Garfunkel on one of their parents' old vinyls. Or perhaps they'd followed Paul Simon's highly successful individual career post break-up, with highlights like his Graceland Album. I turned to Carmen a few times during the concert with comments like "are we that old?" (looking at the people in the next seats). "Yes!" was the quick reply. And "do they realise just how hard it is for this crowd to get to its feet?", "now that song woke a few of them up" and so on (she showed great tolerance). But what an incredible concert. They've lost little vocally and of course Paul Simon has lost nothing musically. This was a quality concert from beginning to end, with backing musicians who are amongst the best there are, some with 20-30 years performing with Art Garfunkel and Paul Simon as individual artists.

As I sang along to songs that I first loved as a 15-21 year old, and which were the accompaniment to Carmen and my teenage years, a few things about them struck me. Putting to one side the brilliance of lyrics and music, many of the songs suggest a maturity well beyond Paul Simon's years when he wrote them, and lots of them display a tension between melancholy (almost despair at times) and hope as the central implied voices seek truth.

The maturity of Simon's early songs is remarkable. A song like "Leaves that are Green" ('Sounds of Silence' album) displays it with poetic simplicity (full lyrics here). The context might be the ending of relationships but this is cast against the inevitably of time moving on and death being its final destination.

I was twenty-one years when I wrote this song.
I’m twenty-two now but I won’t be for long
Time hurries on.
And the leaves that are green turn to brown,
And they wither with the wind,
And they crumble in your hand.

Many of Simon & Garfunkel's songs have always had a good dose of melancholy, almost darkness and despair at times. But the despair is well masked by the quiet confidence of youth that gives a sense that most things can be overcome. If there is despair, it is heard in the words of Simon's central voices, rarely 'his own'. While some of his songs are upbeat and bouncy 'light' pop numbers, like 'Feelin Groovy' (Garfunkel groaned when this was chosen as part of the 3rd curtain call - "I hate this song"!), many of his early songs are in the folk genres of the day and include sometimes pessimistic views of the world. Here are a few examples.

In the song 'I am a Rock' the central voice is that of the self-absorbed individual who makes himself into an island to avoid the pain that might result from relationships. It becomes obvious that Simon doesn't see this is as a sensible approach to life, instead giving implied support to John Donne's poetic dictum that no man is an island. 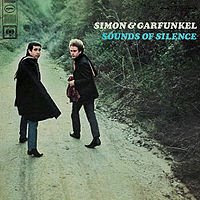 'Sounds of silence' is one of their most famous songs. It was released on their very first 'flop' album (Wednesday Morning, 3 AM) that sold just 2,000 copies, that was followed by their first break-up as a duo. But the recording company had it redone without their knowledge with electric guitar, bass, and drums. This effectively launched their careers. What the song means is open to debate, but with lyrics like the following you immediately sense its depth.

Hello darkness, my old friend
I've come to talk with you again
Because a vision softly creeping
Left its seeds while I was sleeping
And the vision that was planted in my brain
Still remains
Within the sound of silence 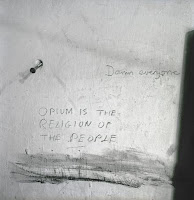 I think that Simon's has written about a wider search for truth, which is revealed perhaps via a dream. Perhaps it is his search, but we're never sure with most of his songs - is this about him or me? The punch line to the song in the last verse is that perhaps truth is found not in the words of historical prophets and great thinkers, but in the simple (but sometimes profound words) of the subway 'prophets'. Now you need to have lived in the 1960s and 70s to realize just how profound some graffiti was in contrast to the inane and mindless tagging of our present age. This was when the Cold War was raging, an age in which every American (and Australian for that matter) thought that a nuclear war was inevitable and that there was a good chance that we'd destroy the world in the process. This was a time when 2-10 words messages had considerable political and philosophical depth.

And the people bowed and prayed
To the neon god they made
And the sign flashed out its warning
In the words that it was forming
And the sign said, "The words of the prophets are written on the subway walls
And tenement halls"
And whispered in the sounds of silence

His words suggest that truth should be obvious to us, that it is there on display every day as we walk through the subway. But of course like any good post modern song (before its time), the meaning is illusive. One of the things that is engaging about Simon and Garfunkel's songs is that they display paradoxes and discontinuities, dots to join, pictures to finished to complete the story. Poetry to be mined and enjoyed.

I'm not sure how I first heard or 'read' Simon and Garfunkel's work in the 1960s and 70s because I listened and sang as an atheist who saw no place for God in my world, no truth in the prophets. There was no God and Jesus was someone's ancient invention. There was no hope for the problems of the world that I saw in religion, but this changed at age 31 (you can read my story here) and my view of the world suddenly shifted. 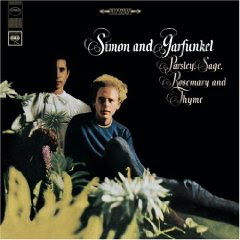 Paul Simon's history is different to mine. He wrote as one who probably had a stronger understanding of God - given his Jewish heritage and having grown up in a strongly Christian country like America - and yet his songs seem to imply that he finds reliance on faith wanting. His songs have many biblical images and reference to God, but he doesn't seem to find his hope there. And yet, there is always this wonderful tension between the need for hope and the elusiveness of it in many of his songs. He is aware of the sometimes aimless wanderings of youth from one place to another, one person to another, one love to another, one pursuit to another, or even one cause to another. "Cloudy" in the 'Parsley, Sage, Rosemary and Thyme' album is a good example of this as it tells the simple story of a young man hitchhiking aimlessly around California.

But everywhere in his songs and the musical laments, crafted in melodies as well as in words, we come back time and again to the inner desire to be loved, to have purpose and to be at home.

When they sang 'Homeward Bound' on Tuesday night the significance of this song hit me as never before, for I listened not as a 17 year old, but as a 57 year-old more conscious than ever that my life is on a perpetual homeward bound trajectory. This 1966 song written by Paul Simon and produced by the great Bob Johnston is said to have been written at the Ditton railway station in Widnes (NW England) where Simon's was stuck. His song speaks of his longing to return home to his girlfriend of the time (Kathy Chitty living in Essex) but also to his home country of the USA. The desire to be at home, with people who love you, where all is certain and predictable is basic to all people. But the Bible teaches that this deep desire for relationship reflects a deeper echo of the call of our Jesus who would have us come home to him, for in heaven he has prepared a place for us and will bring home those who place their trust in (John 14:1-14). It is only here that we will be truly home.


Did the concert take Carmen and I back to the images and memories of our teenage and young adult years? Yes? Did it make us pine for a time when bodies were stronger, faculties more complete, our future ahead of us, the mistakes of later life not yet been made? No! For we are now people who seek truth not on the subway wall, not in the experiences of youth or later age, but in the timeless wisdom of God. And we believe that the prophets did speak this wisdom as they pointed to a time when there would be a new heaven and a new earth (Revelation 21), when we would bow before the throne of God as his children who have placed their faith in Jesus his son. Our ultimate citizenship is not in this world but in the next, for we are a chosen people who are sojourners and exiles in this world (1 Peter 2:1-13), our citizenship is in heaven and we truly are homeward bound. While Simon and Garfunkel's song reminds me of the challenges of this world, it also reinforces for me why I long for another. Home is (to quote Simon) where my love is waiting, but there is only one love that has ensured my heavenly home - Jesus. Isaac Watt's great hymn suggest the rightful response in 'When I Survey the Wondrous Cross' - Love so amazing, so divine, Demands my soul, my life, my all.

John Piper has preached an excellent sermon from 1 Peter 2:11-12 titled "The war against the soul and the glory of God"

James Bennighof, The Words and Music of Paul Simon (here)