Home   And Just in CASE   Freedom to choose: A biblical perspective
Freedom philosophy

Freedom to choose: A biblical perspective 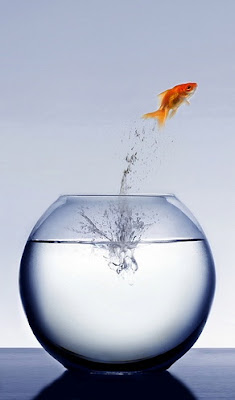 Is this fish free?

Freedom is a word on everybody’s lips. It seems everyone places high priority on personal freedom. However, the focus of individual desire for freedom often finds expression in varied ways:

Don Carson in his recent book “Christ and Culture Revisited” suggests that the desire for freedom is one of the big 4 cultural forces in secular western societies (along with secularisation, democracy and lust for power).

The freedoms people are seeking involve freedom from something – from oppression, control, fear, traditions, poverty, social institutions or values and so on. But as Tim Keller points out in his book The Reason for God - Belief in an Age of Skepticism:

Freedom, then, is not the absence of limitations and constraints but it is finding the right ones, those that fit our nature and liberate us.

The picture of the fish above alludes to this idea that human freedom is related to God’s purposes for our lives. Tim Keller uses this illustration to make this point about freedom.

“A fish, because it absorbs oxygen from water rather than air, is only free if it is restricted and limited to water. If we take it off the hook and put it on the grass, its freedom to move and even to live is not enhanced, but destroyed. The fish dies if we do not honour the reality of its nature.”

But talk to non-Christian friends and you will see that the image of Christianity today is not freedom but bondage. Christians are the fun police and Christianity is a religion of don’ts. Many show their opposition in varied ways: “I want to do what I want to do.” “My sexuality is my business.” “It’s my body, I’ll decide what I do with it.” “Don’t tell be how to behave.”

Where can we go in the Bible for help in responding to our friend’s challenges in this area? Gal 5, Romans 6, John 8, and 1 Peter 2 are all good places to start.

Freedom from the law

Paul tells the Galatian Church (Gal 5:1-15) that they are free from the law and must avoid the temptation to believe that more is needed to experience true freedom.

“For freedom Christ has set us free; stand firm therefore, and do not submit again to a yoke of slavery”

Because tells the Galatians that because Christ has them free, that they are to enjoy the glorious freedom that it brings. They must not drift back into thinking that they can win favour with God by their own obedience or observance of the law. The law won't help the Galatians or us. Like them we can never be good enough in the eyes of God to earn his favour, “for all have sinned and fall short of the glory of God” (Rom 3:23).

But Paul tells the Galatians that there is a second form of slavery that they had escaped. They are not just free from the law, they are also free from sin.

“13For you were called to freedom, brothers. Only do not use your freedom as an opportunity for the flesh, but through love serve one another.” (Gal 5:13)

Paul has more to say in Romans 6 on our freedom from sin in Christ.

15What then? Are we to sin because we are not under law but under grace? By no means! 16Do you not know that if you present yourselves to anyone as obedient slaves, you are slaves of the one whom you obey, either of sin, which leads to death, or of obedience, which leads to righteousness? 17But thanks be to God, that you who were once slaves of sin have become obedient from the heart to the standard of teaching to which you were committed, 18and, having been set free from sin, have become slaves of righteousness. 19 I am speaking in human terms, because of your natural limitations. For just as you once presented your members as slaves to impurity and to lawlessness leading to more lawlessness, so now present your members as slaves to righteousness leading to sanctification. 20For when you were slaves of sin, you were free in regard to righteousness. 21 But what fruit were you getting at that time from the things of which you are now ashamed? For the end of those things is death. 22But now that you have been set free from sin and have become slaves of God, the fruit you get leads to sanctification and its end, eternal life. 23 For the wages of sin is death, but the free gift of God is eternal life in Christ Jesus our Lord.

Paul makes the point here that we aren't just free from sin and the law, we replace one form of slavery with another. You become slaves of the gospel (v17), a slave of righteousness (v18) and finally a slave of God (v22).

The imagery here is of the voluntary slavery – self-surrender leading to slavery (v 16). The voluntary slave was one often living in poverty who could offer themselves as slaves to someone simply in order to be fed and housed.

Do you not know that if you present yourselves to anyone as obedient slaves, you are slaves of the one whom you obey, either of sin, which leads to death, or of obedience, which leads to righteousness? (Rom 6:16)

Like voluntary slaves we have a choice – slavery to sin or righteousness. Jesus taught that no-one can be slaves to two masters (Matt 6:24).

There is a wonderful progression here: conversion involves self-surrender; self-surrender in turn leads to slavery; and slavery demands uncompromising obedience.

17But thanks be to God, that you who were once slaves of sin have become obedient from the heart to the standard of teaching to which you were committed, 18and, having been set free from sin, have become slaves of righteousness. (Rom 6:17-18)

We were made for slavery to righteousness in accordance with the manufacturer’s design. It is possible for the fish to be free of the restraint of the pond, but if this freedom is not consistent with the way he was designed, it is a false freedom that leads to destruction. So too, for humans. If the freedom we seek is not in accord with God’s purposes then it is pointless freedom. No, the fish isn't free, and neither are we when we try to live our lives separate from God. We were made to give our lives in obedience to Christ, there can be no true freedom outside Christ. Jesus said:

A review of Tim Keller's The Reason for God can be found here.