Environmental warriors on a religious crusade?

While I am committed to environmental issues and believe that all of us must be good stewards of God's world, like many others, I am often surprised by the religious zealousness of some environmental activists. Critique of the almost apocalyptic language of the environmental movement has recently come from some surprising sources.

The rhetoric surrounding global warming is drawing increasingly on notions of religion and war. As has been often noted, environmentalism in its more extreme forms is deeply appealing to those of us with a need to believe in something, but who have decided that science has killed off Christianity.

(Bob) Brown with his apocalyptic talk of cataclysm, exemplifies this. Ross Garnaut’s use of the term “diabolical” when presenting his report pressed the same button. The Four Horsemen of the Apocalypse certainly get a good gallop in the report, with predictions of war (geopolitical instability), famine (collapse of agricultural productivity), pestilence (dengue fever) and death (all the above, plus heat-related fatalities).

ABC TV’s political editor Chris Uhlmann, picked up on the religious element in the carbon crusade…… “One of the things that strikes me most strongly about this debate is its theological nature – and that’s essentially that we have sinned against the environment, that we are now being punished and the only way we can escape that punishment is to wear a hair shirt for the rest of our lives”

I pray that Brown, Duffy, Uhlmann and others can join the dots between human selfishness, greed, exploitation, pride, power, environmental decay, sin and rebellion against God, and perhaps read Genesis and Revelation with eyes opened by the Spirit of God. My hope is that in the midst of these difficult times when the environment is under threat, and we face significant challenges from global warming, that they might realise that science does not control the world and that God is not dead!

Just and true are your ways,
O King of the nations!
Who will not fear, O Lord, And glorify your name?
For you alone are holy. All nations will come
And worship you,
For your righteous acts have
Been revealed.
(Revelation 15:3-4) 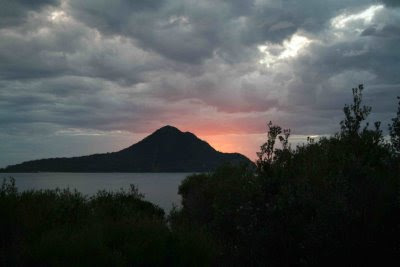 Above: Port Stephens (NSW) at dawn yesterday where I'm holidaying