Home   And Just in CASE   Engaging with others & giving a reason: 10 years on...
Case magazine

Engaging with others & giving a reason: 10 years on... 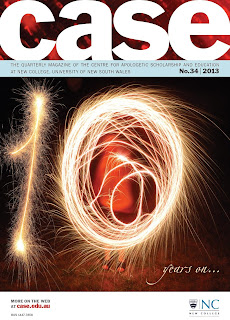 The latest issue of Case Magazine is out and it celebrates the 10th anniversary of the Centre for Apologetic Scholarship and Education (CASE) at New College. The Centre was established in late 2002 with my appointment as the 5th Master of the College.

In the first issue of Case magazine I described its aim as ‘to provide a Christian perspective on social, intellectual and academic issues.’ The Centre was meant ‘…to engage people of all persuasions in dialogue, debate and discussion concerning contemporary issues of broad interest.’ It was to do this through publications, seminars, conferences, online resources, and engagement with others in varied public dialogue and discourse.

CASE has now been doing this for a decade. Case magazine has been one of the key activities of the Centre. Over the years it has tackled a huge range of topics, including family, climate change, debt, apologetics, work, philosophy, science and religion, euthanasia, creativity, poverty, wealth, evolution, witchcraft, atheism, ageing, politics, education, bioethics, war, peace, art, music, literature, happiness, and even Christmas! The early shape, design and make-up of Case was influenced by Dr Greg Clarke who I appointed as full-time Director of the centre and editor of Case in 2003. He held this post until 2006 when I assumed the role of Director in addition to being Master of New College.

As an incoming editor I made some minor changes to what had become an excellent publication. We created an Editorial Advisory Group and from Issue 12 we grouped the articles much more around a particular theme. Over the years, the themes have included The Christian and Politics (#13); Living and Dying Ethically (#17) To Give a Reason (#20); Work in Progress (#24); Acts of God (#27); Selling Christmas (#29); and Believing Science (#32). This has made Case Magazine more than simply a Christian current affairs magazine, or a journal to be read once and discarded. Over time readers, churches, schools and libraries subscribing to the magazine have used it as a reference library of high quality articles grouped in these topic areas. Themes we plan to address over the coming months include identity, media, secularism, refuge, and beauty.

CASE reaches well beyond traditional ‘defence’ apologetics. Its aim is to encourage all to consider the claims of Christianity, and to bring a biblical perspective to all of life. It has done this in many overlapping ways:


a) helping people understand and respond to direct challenges to Christianity (eg. New Atheism, scientism, the problem of evil, and historical challenges—even those in airport novels!);

d) informing people about areas of potential ethical conflict between Christianity and the world, and how to respond (eg. bioethics, euthanasia, sexuality, consumerism);

f) encouraging Christian to engage thoughtfully with the non-Christian world (eg. through political engagement, the media and so on);

and in all these things promoting the attractiveness of Christianity.

To celebrate 10 years of CASE, we have put together a bumper edition of Case Magazine, comprising a selection of some of the most significant articles published in the magazine over the last ten years. To kick the issue off, we invited our foundation director Dr Greg Clarke to write about his thoughts on key directions for apologetics.

The 10th Anniversary issue (#34) also marks the beginning of a new venture for CASE. For the first time, the magazine will be available in electronic form as an e-zine that can be downloaded and read on electronic devices. This will make it even easier for the next generation of readers to access. As part of this venture Koorong will now sell the magazine directly to its customers around the world. The printed version will also continue to be produced as it is now, giving readers the choice of reading the hard copy or the electronic format, or both! Full details on the varied ways to subscribe and buy Case magazine can be found by visiting the CASE website.

In addition, we will be returning to an earlier practice of Case Magazine, which is to provide a Discussion Guide for groups to download and use, to help discuss the content from each edition. This will commence with Issue #35, with the theme of Identity.

I hope that you will enjoy this special anniversary edition of Case. Thank you to those of you who have supported and contributed to the work of CASE over the last decade. To others, for whom this issue may be your first introduction to the Centre, I hope the work of CASE will be a blessing to you both now and into the future. If you would like to purchase individual issues of Case or subscribe to receive quarterly publications, then visit our website HERE.