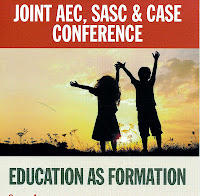 A major education conference was held at New College on Saturday 26th May 2012. The conference was a joint activity of CASE, the Anglican Education Commission (AEC) and the Sydney Anglican Schools' Corporation (SASC). The theme was 'Education as Formation'. Over 230 people attended to hear a number of speakers address the theme.

Professor James K.A. Smith from Calvin College spoke on ‘Educating the Imagination: Christian Education as a Pedagogy of Desire’.
Professor Trevor Cairney spoke on ‘Pedagogy and the nurturing of the child’
In the afternoon four practitioners from four Sydney schools addressed the theme in relation to their own practices. The speakers were Dr James Pietsch, David Hastie, Dr Anne Johnstone & Richard Ford. All four presented separate 'Case studies in Christian Education'.

He pointed out that in spite of progress there is:

little literature devoted to discussing Anglican education;
no faculty whose business it is to research the subject;
no course devoted to explaining it;
no philosophy which encapsulates it;
no accessible theological discussion of it.

Dr Jensen expressed his impatience to see an increasing depth in discussions by Anglicans concerning the distinctives of the education offered by Diocesan schools. Having said this, he indicated how encouraged he was by the work of the AEF. In particular, he saw that the book 'New Perspectives on Anglican Education', and the accompanying 'New Perspectives' website, was a big great step forward. He is encouraged that hundreds of copies have been sold across Australia and internationally and, that a number of positive reviews have been written.  He commended the ongoing work of the AEC and his anticipation that the conference would extend the conversations and offer some answers to his questions. He concluded his talk by suggesting that education is much more than classroom instruction.

"It seems to me....that the essence of schooling is the invitation from a fellowship of learned learners to join the circle of their relationship and to fall in love with what engages them." 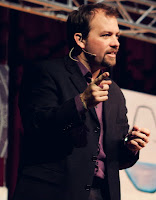 Professor Smith (Calvin College) had been in Sydney to present the 2012 New College Lectures. He also presented a plenary address to the conference. He began with the suggestion that Christian education is "...nothing less than a re-narration of our identity in Christ." Christian education he argued is a process of rehabituation. That is, a formation in virtue and habit that occurs at the intersection of our stories and bodies. "We live at the nexus of story and body in such a way that sanctification is both aesthetic and kinaesthetic—both tactile and poetic". He began by framing his talk with a powerful illustration from the movie 'The King's Speech'. The movie concerns the battles of King George VI to overcome an uncontrollable stammer. He needed to conquer this as he assumed the British throne, but a lifetime of attempted solutions had already failed him. The movie centres on his relationship with Australian speech therapist Lionel Logue who pushes him to examine the base of his problem. The therapist set about retraining the King’s body and soul by helping him to confront his fears and his past. Logues was effectively inviting George VI to embrace a new story.  James Smith drew on Merleau-Ponty's concept of “habit-body,” to make sense of what Logue's was trying to do. Logues had realised that the stammer was bothbodily and psychological and challenged the King to address the story that gave shape to his life, a story that he carried in his 'bones' not just in his mind.

Professor Smith used the opening illustration to point to his central thesis that Christian education is not just about transmitting knowledge but, more fundamentally, it is an exercise in formation. Such education shapes our orientation to the world—it is what we might call a “sentimental education", an education of our sentiments, loves and desires. He ended by drawing on the work of David Brooks. Education he argued is about shaping young people to be sent out into the world to act justly and rightly. To do this we need to help them to learn to perceive the world in the right way. This requires the development of a sensibility or temperament that changes the way our children participate in the world. This new sensibility or temperament, then, shapes how our students see the world and act in it.

In my own address I framed my talk with a simple definition of education penned by M.V.C. (Vaughan) Jeffreys in 1950. He suggested that ‘Education is in fact nothing more than the whole of life of a community viewed from the particular standpoint of learning to live that life’. I used this definition to develop my own framework for Christian education. I suggested that authentic Christian education must recognise that schooling has a relationship to the ‘whole of life’, that it occurs within diverse communities of practice, and that it is delivered by people and institutions that view the world and their educational intent from a ‘particular standpoint’.

The role of teachers and the school is to nurture and assist the formation of the children God gives to us. We do this by inspiring them, ‘pointing’ the way and influencing their view of the good life and the futures they desire. I suggested that we often allow ourselves to be distracted by lower level or conflicting priorities and end up with a focus on end goals ('telos') that are difficult to differentiate from secular schools. I argued that we over-emphasise things that can be markers of good education, and not bad in themselves, but which should not be the key drivers of our education. Things like excellence, achievement, social responsibility, knowledge, personal reward and so on. Instead, I argued that authentic education requires the fostering and generating within our students of ways of relating to God and to the world in word and action.

The key to authentic Christian education is a right focus on the things that matter most in the formation of the child. To do this, I argued that good ‘pedagogy’ is vital, not just better curriculum shaped by Christian belief and doctrine. ‘Right’ pedagogy, is practice informed by the best of educational wisdom and research, as well as our faith and knowledge of God informed by the Scriptures given to us by the power of the Spirit. My use of the word pedagogy is meant to encompass the essence of how teachers orchestrate and sustain classroom learning and life and, it is done with the formation of the child for the glory of God as the priority. Good pedagogy requires more than just the delivery of curriculum content. Pedagogy reflects a teacher’s knowledge, beliefs and goals that in turn shape their actions.

Haro Van Brummelen in his book 'Stepping Stones to Curriculum: A biblical path' reminds us that knowing, being and acting are all tied together in the biblical view of knowledge. Authentic Christian teaching and education should demonstrate this and be shaped by priorities that are shaped and oriented to the Kingdom of God, not the kingdoms we seek to create on earth.

We are keen to continue a conversation with teachers, parents, school leaders and people who value education and its God-given purposes. The major addresses from the conference will appear soon as audio files to be downloaded from the CASE website. As well, the next edition of Case magazine will be out in July and will have the theme 'Education as Formation'. Readers of this blog might also like to purchase a copy of our book 'New Perspectives in Anglican Education: Reconsidering Purpose and Plotting a Future Direction'. My co-authors are Bryan Cowling and Michael Jensen.  It is the outcome of a year of intensive reading, thinking and discussion with a group of nine other Christian educators who together made up the Anglican Education Fellowship (AEF) referred to above.