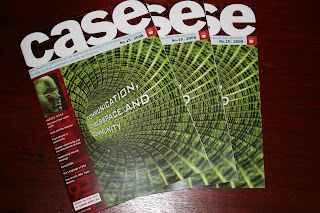 Case #15 is out and should be in the mailboxes of subscribers this week. The theme of ‘Communication, Cyberspace and Community’ has been chosen in recognition that we live an age of unprecedented development in communication technology that is having an impact on our lives. Whilst technology has led to rapid improvement in communication throughout the last century, the changes in the last 20 years have been staggering. The impact of new media and communication has arguably changed the way people communicate, relate to one another and form communities of interest and support.

Consider the fact that in the 1st Century AD communication at a distance was achieved with letters and written messages of various kinds. This system remained largely unchanged for almost 2,000 years. While the speed with which the written word was sent increased slowly over the centuries due to technology advances in transport, the Roman system of sealed written documents delivered via a network of mail centres and ‘postmen’ has changed little even up till the present day.

The ability to share knowledge in more complex and extended forms was restricted until Johannes Gutenberg invented the printing press in 1440. This eventually permitted the mass production of books and as a result opened up education to the masses. This technology was largely unchanged for over five centuries, but the printing press enabled greater access to information and knowledge.

But the last twenty years have seen changes in communication shaped by technological advances not thought possible in my childhood. The 1970s to 1980s saw the development of the personal computer. The fax machine gained widespread use in the 1980s. The Internet had its genesis in the defence industry in the 1960s and the University of California in the 1970s, but it did not become widely available until the late 1980s. Similarly, the mobile phone did not become available until the late 1980s. Associated with these developments was the growth in the power and reach of the Internet in combination with software developments such as search engines, email programs, and developments in video and audio technology. In the last few years alone we have seen MySpace and Facebook change the way a whole generation communicates, and the electronic book is now a serious competitor for the traditional book that has been largely unchanged for centuries (see a recent post of mine on the Kindle on another blog).

We gave four themed articles:
Case #15 also contains book reviews, a response to Andrew Bain by Ben Myers ("Which Apologetics") and a piece on Natural Theology by Larissa Johnson. If you're not a subscriber to Case could I encourage you to consider joining. This full colour 32 page magazine comes out quarterly. You can become an Associate of CASE for $55 per year which will entitle you to receive all four issues plus other benefits. There is also a student rate of $35 (great for Bible college or university students) and an online version for overseas associates that avoids postage costs and delays. More information is available here.