In his influential book 'Exclusion and Embrace', theologian Miroslav Volf shows that understanding and living with the 'Other' - that is one unlike ourselves - is not simply a matter of accommodating diversity. He suggests that our approach to the 'other should reflect the character and actions of our God revealed in the person of Christ. Volf challenges us to embrace ‘the other’ in the light of God’s giving of himself on the cross—this includes our enemies. We need to adjust our very identities to ‘make space’ for the other. This is a challenge for all people.

Australia like many Western democracies has experienced a diversification of immigrants coming to our shores in the last few decades. Almost all of us are immigrants in this country, with the exception of Indigenous Australians who make up about 3% of the population. With each new wave of immigration there have been tensions as fear of the impact of new residents has led some to question immigration levels (see my previous post on 'Dispelling the Myths of Boat People').

Volf's work is a counter to other responses to increasing population diversity and struggles to deal with difference. While some see the celebration of multiculturalism as solution enough to a fear of others, such views are simplistic. While multiculturalism has the potential to encourage the recognition of different cultures and the valuing of all people in spite of difference, there is a danger that while celebrating diversity in cultural practices, we may simply mask deep-seated fears and prejudices. In other words, we might be happy and comfortable with others as long as we can see ourselves in them. At the base of opposition to immigration is often a fear of what we don't know about other people. Can literature help to break down such fears?

Embracing the 'other' through literature 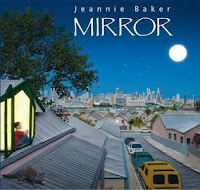 Literature can be a great help in developing tolerance and in breaking down fear of the other, but like multiculturalism it can also gloss over differences. As continental philosopher Emmanuel Levinas argued, Western tradition has tended to privilege the 'same' over the 'other', acknowledging the 'other' only to the extent that they can be 'made' to be like us. While it is easy to see this tendency in the colonial domination of nations and people, Levinas argues that we are slower to recognize it in our individual actions and thinking towards others, resisting (or quietly ignoring) difference and embracing that which we recognize in ourselves.

If authors fall into this trap their work will do little to reduce the fear of the other; rather, it might simply smudge out the inconvenient differences, such as religious beliefs, while underlining that which is common in our shared humanity. This might lead to little more than a shallow acceptance of others that is tested when our world is impacted even in small ways.

In the educational field multicultural literature programs have been seen as a valuable way to fight racism. But while literature has the potential to hold a light to what is common and different, it can also represent an ideological quest to remove that which has been judged to be wrong and oppressive because it is different. For example, much post colonial literature in seeking to legitimately offer new voices from previously unheard groups, can easily villianize previously dominant views of the world. Christianity has received much blame for such oppression, as have white males. This is not to ignore the fact that both groups have been responsible for wrongs, but if literature is to offer a critique or counter to racism and fear, then it must do more than blame others; it must encourage us to consider, listen to and understand others.

With the above in mind we need to view any piece of literature that deliberately sets out to offer an alternative reading of our times with healthy analysis. There is an even greater need to adopt a questioning stance when the literature has been written for children.  A recent example is worthy of consideration.

Jeannie Baker is an English artist who has lived in Australia for over 30 years. She is well known for her outstanding collage art that she frequently turns into children's picture books. You can read a review of her work on my blog 'Literacy, Families & Learning' (here). Her books usually have few or no words and typically offer some form of social commentary. She has written in particular about the impact of humanity on the natural environment.  But her latest work 'Mirror' is an attempt to challenge her readers to consider two families in two places - one in Sydney and one in Morocco. One we assume to be Christian and the other Muslim.

The concept for the book is brilliant, the quality of the images stunning, and the book design groundbreaking. The wordless picture book that she has created is, as usual, challenging at many levels. It is the concept and design that will first catch your attention. The book is slightly more square in shape, and it defies your efforts to open it in a conventional way. This picture book comprises two stories that are designed to be read simultaneously – one from the left, the other from the right (see below). As you pick up the book you try to open it from right to left only to have the book open at the middle to reveal two books, one that is read from left to right and begins in Arabic, and the other from right to left that begins with English. Page by page, we experience a day in the lives of two boys and their families - one from inner city Sydney, Australia and the other from a small, remote village in Morocco, North Africa. 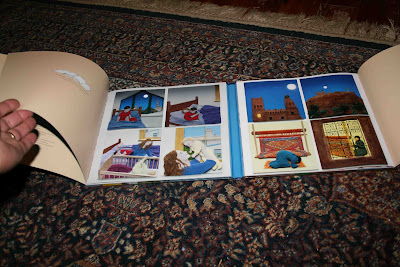 Jeannie Baker conceived the book while travelling alone in Morocco. It was while immersed in the warmth and generosity of the Moroccan people and while experiencing the sights, smells, sounds and textures of the place, that she conceived the idea and knew she had to produce it even without approval from a publisher. Baker's book, in a sense, holds a 'mirror' to the world and produces a stunning and memorable insight into two families in two quite different places.

While the two worlds portrayed couldn’t be further apart, she shows through the parallel lives of the two families, a simple and profound truth. While people live in vastly different places, and have different lives, we share much. There is much that is different about the families. The book itself shows that language is different and how it is accessed is different. The illustrations and story show that religion, homes, landscape, transport, clothing, food, shopping, market places, daily tasks and family practices are different.  But there is also much that is the same. Family members love one another and depend on each other. A mother and father work each day and children learn, help at home and spend time with family. Children in Morocco do different things each day than in Sydney, but they are perhaps more like us than we might imagine. And there is an additional truth - we are connected to each other. With subtle use of images Jeannie Baker is able to show this connection. The delight of the reader is to discover these, with technology and trade as two examples. My grandson shouted excitedly as we read the book together for the first time "Look, look, it's the same carpet. The carpet they were making (in Morocco) is the same carpet they bought (the people in Sydney)".

How successful is Baker at communicating common humanity while not glossing over difference? Quite successful I think. While there are limits to what can be communicated with a wordless picture book, she offers a piece of literature that does more than offer a tokenistic view of common ground across two families and two different cultures.  This is a book that notes the differences while at the same time recognizing that we share humanity. Her book should be a challenge to Christians and non-Christians to be open to the embrace of the other. At the very least, books like this one offer a wonderful tool for conversations with our children about other people with different faiths and cultural practices.  For the Christian parent, the hope is that these conversations will lead our children to reflect the character and actions of our God revealed in the person of Christ. Our hope should be that they grow up to embrace the 'other’ in light of God’s mercy and grace in giving himself on the cross. Our hope should be that as they grow they would develop identities that meet Volf's challenge to ‘make space’ for the other and in doing so to offer paths for the sharing of their faith in Christ with humility, grace and love.

In a recent edition of Case magazine on 'Otherness' Mattheson Russell offered this sound advice:

"...the problem of otherness is no dry and abstract matter. It is a problem that is intimately bound up with fundamental questions we all face in the contemporary world: Is there anything more to life than acquisition, competition and violence? Dare we believe that it is possible to live with others - avowed and disavowed others - in communities of peace? Dare we believe that at the heart of the universe is an Other who is love?"