A (Christian) friend of ours recently told us that for his son’s upcoming eleventh birthday, he is planning to take the boy and some friends to see an M-rated movie. We were surprised, to say the least: it is not so very long ago that we cautiously started allowing our children (ten and eight) to watch selected PG films.

What is wrong, one might ask, with an eleven-year-old (or an eight-year-old, for that matter) watching an M-rated movie? Are my wife and I too conservative? If most parents allow their children to do it, can there be anything wrong with it?

The first part of my answer lies in the guidelines for movie classifications themselves. According to advice from the Australian Government Attorney-General’s Department (here), films classified “M” are “not recommended for persons under 15 years of age”. Certainly, films with a given rating can vary greatly in their content and potential impact: but this rubs both ways. PG films, for instance, which apparently are regarded as innocuous by the great majority of parents (judging by the ages at which many children start watching them) can range from very mild, with perhaps one or two moments that, say, a six-year might find frightening ('The Lion, the Witch and the Wardrobe' is a good example of this), right through to films that are aimed principally at an adult audience and contain commensurately adult themes, and are therefore fundamentally unsuitable for children (this is going back a bit, but 'Drop Dead Fred' is an example of this latter kind that I am familiar with).

One of the concerns with PG films is that the term “Parental Guidance” is probably not clearly understood by some parents. The idea is not that all PG films are OK for children to watch as long as their parents watch along with them, and explain any confronting bits. Rather, it is that parents should exercise good judgement in deciding whether the film is suitable for their children in the first place (if necessary, by watching it first themselves, or at least having a very clear idea of the content). Perhaps “PD” (Parental Discretion) might be a more helpful term. Whatever the ages of their children, this is an area where parents need to exercise considerable care and wisdom.

The main concern is that children might be confronted with images or concepts which they do not have the ability to process or understand; and having a parent sitting alongside them will not necessarily have an ameliorating effect: my wife tells of a shocking image from a film she saw as a young child, in the company of her parents, which has stayed with her all her life. The effects of being exposed to such images might not be immediately apparent. 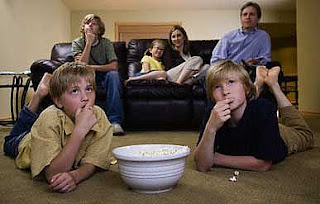 The tendency for children to be allowed (or even encouraged!) to watch films containing material they might not be mature enough to comprehend or otherwise process constitutes an aspect of the trend in contemporary society for children to be “pushed on” to the next age level in their thinking and habits. This is particularly evident in the case of young girls (so-called “pre-teens”) – a matter about which there has already been considerable debate. As parents of a ten-year-old girl, we experience the resisting of this trend as a constant battle: so often, it seems, children are encouraged to act/think/look in ways which, a couple of generations ago, would have been appropriate for children at least a couple of years older.

What is driving these changes? To suggest that the agenda is purely commercial seems simplistic; yet there is probably some truth in it: the more aware, savvy and (ostensibly) mature a child is, the more sophisticated (and expensive) will be the “toys” they will be in the market for, and the greater will be the gains for those manufacturing and selling (not to mention advertising and marketing) those commodities. Role models in the entertainment industries also probably play a part in encouraging children to look and act older than their age: and the kind of access today’s children have to images of celebrities via computers, DVDs and mobile phones was not yet even in the realm of fantasy when I was growing up 40-odd years ago.

Why, as a society, do we seem to find it difficult to let children be children: to grow up at their own pace, as it were? There is no easy answer. Perhaps it boils down to a question of innocence, and how we are to understand it. The bible does not have a sentimental attitude towards children: they are clearly represented as being implicated in the essential loss of human innocence that occurred at the Fall: “Surely I was sinful at birth”, writes the psalmist, “sinful from the time my mother conceived me” (Psalm 51:5). Yet it is possible to set alongside that truth a sense in which children are innocent – unversed in the ways of the world – and therefore in need of our protection.

Part of our duty of love and care towards our children consists in protecting them from influences that have power to harm them: whether from commercial interests that would see children as just another commodity to be exploited; or from societal influences that are less easy to define or understand, but no less dangerous for that.