Home   And Just in CASE   C.S. Lewis: Two letters to which he did NOT reply
Apologetics literature

C.S. Lewis: Two letters to which he did NOT reply

Anglican Media published a brief piece this week on the letters of C.S. Lewis. The article was written by Greg Clarke and spoke about (among other things) the amazing record Lewis had as a correspondent.

Lewis received a stunning number of letters daily - perhaps akin to the number of emails we each receive now. Lewis, unlike most of us, read them and answered them seriously and courteously. Whether it was a reader’s complaint that a character in The Screwtape Letters could not have seen Bus 73 from where he was standing in London (VIII, p.1562) to comments on the comic reading habits of children (VIII, p.1178) - Lewis thought adults were hypocrites about this - he penned a genuine reply.

But here's a scoop. I have at least two letters to which C.S. Lewis did not reply (the letters shown in the images below). 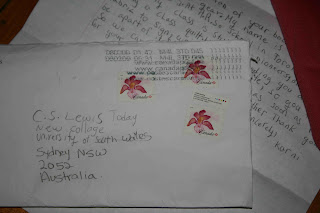 It seems that the power of Lewis to invite response lives on. These young students from Ontario Canada seem to have been so gripped by the writing of Lewis for children that it moved them (and perhaps their teacher) to include him in a "quilt that they are making of pioneers". It seems they weren't aware that he died in 1963. They sent letters to him at CASE (New College) presumably because we ran a conference on C.S. Lewis in 2007. It seems an old link led them to our College website. Perhaps the 'Meet CS Lewis' section that contained a description of Lewis and his work, led them to conclude that C.S. Lewis 'Today' is at New College. Of course I will write to these two children pointing out that Lewis couldn't answer the letters himself.

I could say a lot about how some children do research and read on the Internet, but I have a piece that partly addresses this topic to appear in the next edition of Case Magazine which will be available in about 3-4 weeks - "Truth and the Internet". I also have a related previous post on this blog that might be of interest. 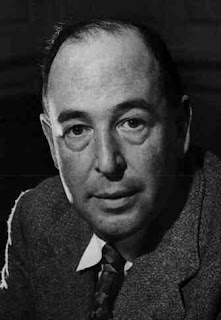 One key thing that the letters also demonstrate is that Lewis was a remarkable apologist whose legacy for the gospel of Christ lives on!

More information on all three volumes of the The Collected Letters of C.S. Lewis can be found at these links: