Prof John Wyatt presented the second of three public lectures in the annual New College Lectures last night. His second talk was titled "Bioethics and Redemption". Like his first talk (here) he spoke with humility and grace; treating a complex topic and difficult issues with great sensitivity and respect.

1. Christian thinking about the human embryo 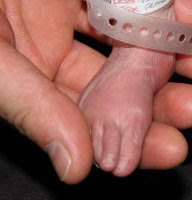 He began once again with fundamentals – human development before birth – the “human embryo”, a unique type of being. Not a baby 'not quite born', nor a collection of genetic material. It is something unique, different in kind. He then went on to consider what it is to be human – a foundational ethical issue. In considering this, he spoke helpfully of two tensions. First, between the 'physical and the immaterial' - two aspects of 'being' locked together in humanity. Humans are fully physical and fully ‘immaterial’. He reminded us that 'materialists' (e.g. Peter Singer) would want to see humans as machines that have achieved a level of self-consciousness. The 'philosophical idealist' he suggested would see us as spiritual beings attached to bodies for a time. Alternatively he argued that the 'biblical anthropologist' denies both these positions and suggests that we are at one and the same time physical and spiritual beings. This tension he reminded us is seen in the incarnation (Jesus – fully human and fully God), the Bible (human writers divinely inspired), divine providence (God at work through the evil acts of men who crucify God’s Son).

The second tension he mentioned was between the ‘already’ and the ‘not-yet’. The Bible would suggest that we are already human beings but in Christ becoming something else. We are already made in God’s image, but we are being transformed into the likeness of Christ (2 Corinthians 3:18). He then critiqued the language of 'potentiality' and the philosopher's notion of 'not quite yet' a person when applied to the embryo. He suggested that we should stop talking of Human Embryos and begin talking of ‘Embryonic Humans’ that could sit alongside the use of terms like foetal humans, adult humans, geriatric humans and resurrected humans.

He suggested that to the 'materialist', all evil is a consequence of "meaningless molecular interactions". Hence the minimisation of suffering becomes the supreme moral good and suicide a noble death. 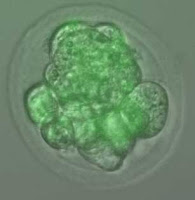 He offered new insights into the potential of stem cell research for good, but questioned the use of human stem cell research and the harvesting and creation of embryos for varied purposes. He pointed out that there are ethically acceptable alternative sources of stem cells, including adult bone marrow, skin cells and umbilical cord blood and tissue.

We then considered what I would call the major public ethical dilemma of the last few weeks in this Australia. We have felt the pain of Christian Rossiter, who wants to die and escape what he sees as “being a prisoner in his own body” (see reference to this story here). How are we to respond to these types of real life situations? There are challenges for all in the face of suffering, but this is more acute for a humanity that sees suffering, death and pain as things that are meaningless and that have no place in their worldview. He put his finger on one of the great fears of our time – loss of independence and autonomy. Suicide and euthanasia are increasingly seen as noble ways to die, when faced with what is seen as meaningless suffering and what is judged to be a less than human existence.

3. Christian perspectives on death and suffering

We then considered a Christian perspective on death and suffering as Prof Wyatt brought us back to the Bible. He argued that death is not natural and was not part of God's plan (some will want to challenge this view), and that for many, it can only be seen as the ultimate terror. But the Bible teaches that the Christian's attitude to death and suffering is to be different – it is not meaningless, for it comes from the hand of God and it produces endurance, character and hope (Rom 5:1-11). He then argued that in Christ (his incarnation, death and resurrection) we find the lens through which we must view our painful contemporary dilemmas. It is in the hope of Christ that we find peace, complete redemption, eternal joy and fulfilment in worship and praise of our God.

Professor Wyatt illustrated how the Christian hope can change the way we view suffering and death with stories of people from his own clinical and personal experience, who have gone where few of us have been, and where none of us would choose to go. And yet, in each case he pointed out, that the people who had suffered from degenerative disease, the birth of a child with a degenerative illness or disability, the evil of rape and a resulting pregnancy, had all seen God glorified and their lives enriched in the midst of pain and suffering. The ultimate paradox it would seem is that sometimes the image of God is seen most clearly in brokenness and the imperfect, with of course the cross being the ultimate example. Pain and suffering can be transformed by the grace of God and used for his purposes.

Finally, he challenged us to avoid judgement and stand instead with people who go where we would never want to go. We are to love and serve them as God works out his redemptive plan for their lives and in fact all of his creation. Whether it is through better palliative care, pregnancy support centres or support of families in crisis, we must offer alternatives that help people to deal with pain and suffering and point them to the hope of Christ. His 3rd talk tonight is titled 'Bioethics and Future Hope'.

Full details on the lectures (here)