After three Bill Henson blog posts (see here, here and here) I decided that I had subjected myself to enough frustration over this matter and wouldn't re-visit the topic. This was until I was confronted by Elizabeth Farrelly's frustrating essay "Paint them ugly" in the Sydney Morning Herald (12-13 July). I read it while on a much-needed holiday with my wife Carmen. I tried to ignore it. But eventually, I read it and felt compelled to send a letter to the Editor (which wasn't published!). I also decided that I needed to follow up one more time with a post on Henson's art. On the same day I had a fascinating exchange with a dissenting anonymous reader in response to my third Bill Henson post (here) that dealt with the provocative Art Monthly Australia magazine cover of a naked 5 year old girl. My reading of Farrelly, my letter writing to the SMH and my engagement with the anonymous blogger all overlapped. It took all my emotional energy and much of my time across a whole day to read, respond and write my letter, and so I decided I'd leave the blog post till later. Here it is, two weeks later. The Farrelly essay was in effect an attempt to provide a serious comment that would help readers to reflect on childhood and the transition to adulthood, and specifically the way that power is often imbalanced between adults and children. She made some excellent points. But after providing three interesting vignettes on childhood and family life she attempted to take the high moral ground in relation to the Henson affair:

"The Henson affair was resolved by not being resolved. The pictures were returned, no charges laid but viewable by appointment only. For Henson, for his gallerist Ros Oxley and for any artist or gallerist tempted to show any child, ever, the message was Beware! Beware the moral majority, the expectation of niceness in art, the imposition of 'standards' - not of artistry, or craftsmanship, or skill, but of decency. Decency, in art.

Never mind that decency, in all its small-mindedness, is the very anathema of art. Or that art and pornography are virtually opposite cultural forms. Consider for a minute the questions left by the Bill Henson affair about the nature of childhood, of children and of our relationship, as adults, to them."

As one who had objected to Henson I felt I was being unfairly attacked as "small-minded", part of the "moral majority" and so on. Farrelly proceeded to make a number of basic (almost random) points:She then moved to a questioning of parents and their motives for wanting to protect their children. She questioned parental motives for protection. She implied that the modern over anxious parent is too concerned with parenting styles, education, nutrition, discipline etc (she has a point here). Children are not perfect she suggested and neither are parents. Where is this going you might ask? It seems that Farrelly was wanting to blame society at large and families in particular for pushing children prematurely into adulthood and never encouraging some young adults to grow up (and of course there is some truth in this). Perhaps her point was badly made and she was trying to say that Henson's work is a commentary on our times. 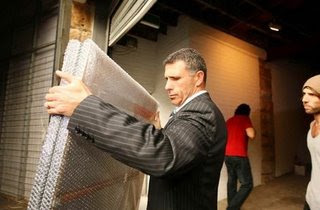 The frustration with an essay like Farrelly's is that in her endeavour to play to the arts community there is a confusion of liberalism and relativism that leads to a failure on her part to adequately test her own assumptions. On one hand she was acknowledging that childhood and adulthood are different, that childhood innocence should exist, that parents have a role to protect and preserve childhood etc. But at the same time she wanted to promote the relativist argument that childhood is simply a construct anyway; what's all the moral fuss. I haven't the space or the time to do a complete critique of the essay but let me finish with the following quote and one point which I think is telling :

"Hardly surprising, perhaps, that once there (i.e. retreating from the task of parenting), we emit contrary and confusing signals; hyper-parenting, worshipping and yet negotiating. Deciding 18-year-old boys are old enough to die for their country but fifteen-year-old girls are too young even to recognise the power that having curves and pouts suddenly gives them. Turning the family from a hierarchy into a mini-democracy where children, teens and adults have equal status and discipline is no longer imposed but negotiated.

What we do not see, however, is that this perpetual childhood of ours is stolen from our children. Childhood - that particular, magic vision that allows kids to walk under tables, and fly under the radar - relies on being powerless as much as being small; relies on some external, benevolent source of power. We don't see this, because we see all empowerment as good.

So we abrogate. We refuse to exercise proper power over our children, or to recognise that children segue into adulthood by emulating us. We decline to set for them the boundaries or develop in them the skills by which they might securely navigate this process. We build a society obsessed with celebrity, sex and consumption, where advertising ice-cream on the sides of buses evokes oral sex, and then we affect abhorrence at the way our teenagers practise celebrity, sex and consumption.

The costs are high. In indulging our reluctance to play the grown-up, we sacrifice our children on the altar of our own cowardice, shoving them over the top to face an adulthood from which we ourselves shrink."

Stirring words, I wish I'd written some of them. But somehow, Farrelly seems unable to reconcile her own words (with which there is much that I see as true) with her own desire to argue that Henson, gallery owners, art magazine editors and even parents should be free to use images of naked young children beyond critique and accountability. The public, including people of faith and non-faith, professional educators, parents and grandparents, doctors and health workers, social workers, psychologists, police, lawyers, even the Prime Minister of this country, has questioned the wisdom of allowing children as young as 13 years to pose naked for a photographer. Images that are then placed on public display and distributed via the Internet to the world. With one of Farrelly's points I concur - sex has power. Yes there is power that can be exercised through sexuality. Yes, we should "exercise proper power over our children". Yes, we do have a society "obsessed with celebrity, sex and consumption". Yes, young people in the years of puberty may discover their own sexuality and wish to explot it. But given Farrelly's own words, you would hope that she might see a role for others to offer children guidance in this area, beyond simply offering them freedom to choose. That's why some have questioned the use of these images - any civil society, any community, has the right to raise such matters.

The matter of power seems to be of critical importance for Farrelly and so I have three questions about power for her and other apologists for Henson. Who is in control of the power of the 13 year old girl's emerging sexuality that Henson sought to portray? Who was exploiting this emerging sexual power? And whose purposes were most served by its use?