Belief in an Age of Reason 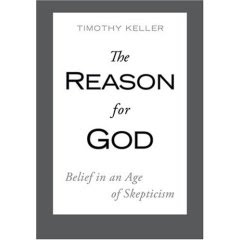 Tim Keller has a new book ready for release on the 14th February that should be of interest to readers of this Blog. The book is titled The Reason for God: Belief in an Age of Skepticism. Justin Taylor recently interviewed Tim about the book on the Between Two Worlds Blog. For more information on the book and its availability you can check out Amazon or Barnes and Noble.

Tim Keller is Senior Pastor at Redeemer Presbyterian Church in Manhattan. In talking about his book he comments:

I've been working for some time on a book for the ordinary (which means very sharp) spiritually skeptical New Yorker. Ever since I got to New York nearly two decades ago I've wished I had a volume to give people that not only answered objections to Christianity (what has been called 'apologetics') but also positively presented the basics of the gospel in an accessible yet substantial way. I had some books that did the one and some that did the other, but only one did both—Mere Christianity by C.S. Lewis. As you know, I think Lewis' book is peerless, and foolish would be the author who tried to replace him! However, the issues in the public discourse around Christianity have become much more complex than they were in the mid and late 20th century. The questions are now not just philosophical (e.g. Is there evidence for God's existence?). They are also now cultural (Doesn't strong faith make a multicultural society impossible?), political (Doesn't orthodox religion undermine freedom?) and personal. Also fifty years ago, when C.S. Lewis was writing, there was general agreement that rational argument and empirical method were the best ways to discover truth. That consensus has vanished. Today there are deep disagreements over how we know things and how certain we can be about anything. Most of the older books presenting Christianity now are only persuasive and even comprehensible to a very narrow range of people. All this means that there is a great need for new literature that speaks to our time and says, 'Christianity makes sense.'

Additional author comments on the book can be found on the Redeemer Presbyterian website.