Beauty in the 'dappled' things of life

On 23rd August Rhonda Watson died less than three years after hearing that she had Motor Neurone Disease. She was a 58 year-old wife, mother, grandmother, daughter and sister. She was also a wonderful teacher and talented writer. She was a personal friend, fellow church member, fellow Bible study member and sister in Christ. 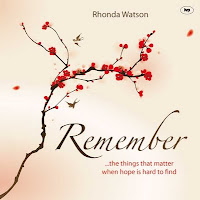 At her funeral last week many wonderful things were said about her. A recurring theme was her love of writing and of language. Words were so important to her, and continued to be right up to her death. But Motor Neurone Disease took away her ability to talk in the early stages of the disease and so much of her last two years of life were spent without the ability to speak. But while she lacked speech, she wrote many things. These included notes and emails and a newspaper article titled 'This (speechless) life' (here). The latter shared her experience living without the ability to speak. One of the things she found helpful was to write letters to herself as she struggled day by day. She was inspired to do this after reading how Seneca, the Roman Stoic philosopher, had written letters to fictitious recipients.  She wrote these to remind herself "...about what gave [her] life meaning [and] to speak to [herself]..".

Eventually Rhonda decided that the things she was writing and the readings that she found helpful, might just be helpful for others in the midst of their own struggles. They were turned into a book and were published not long before her death.

'Remember: The things that matter when hope is hard to find' was published by IVP and contains poetry, literature, theological and philosophical writings, and biblical texts that helped and inspired her. She describes the book this way:

"This little book is my response and my effort to 'talk to myself' wisely, gently and yet firmly.."

It is a remarkable little book of 192 pages. It is a personal devotion that shares the texts she found helpful, her comments on them, some of her prayers and responses, and some of the wisdom born in the struggles of her life each day.  The book has eight sections:

Beauty and ugliness
Silence and speech
Fear and trust
Thankfulness and bitterness
Joy and grief
Delight and despair
Awake or asleep?
Life and death

She opens the first section of the book by reflecting on what it means to be ugly. Increasingly, in her last 2-3 three years of life, Rhonda spent most of her days alone with no one to impress. She pondered, "What is ugliness? What is beauty? Does being 'beautiful' really matter?"

Glory be to God for dappled things -
For skies of couple-colour as a brinded cow;
For rose-moles in all stipple upon trout that swim;
Fresh-firecoal chestnut-falls; finches' wings;
Landscape plotted and pieced - fold, fallow, and plough;
And all trades, their gear and tackle and trim.
All things counter, original, spare, strange;
Whatever is fickle, freckled (who knows how?)
He fathers-forth whose beauty is past change:
Praise him.

She reflected on Hopkins' poem and how he saw 'dappled', unusual, 'strange' and different things bringing glory to God.

"Their very strangeness is cause for praise to their creator. He sees something that strikes him as beautiful and praises its maker. He who 'fathers-forth' is the only one whose beauty is 'past change'. The speckled, imperfect, unusual, and dappled creatures are as they are; it is in the creator that beauty is found. He is beauty."

Rhonda finished this section with Psalm 27 in which King David speaks of God's true beauty and his desire "to gaze upon it". Finally she reminds us that in Christ we see this true beauty, for at the cross Jesus gave himself as a sacrifice for those with nothing to commend them. He gave up the beauty of God for the ugliness of the death that we deserve. But for Rhonda the resurrection that followed Jesus death was in her words "a beautiful moment of sweet victory over all that is marred and wrecked by sin" (1 Corinthians 15:42-44). Rhonda knew that the ugliness of Motor Neurone Disease and the death she would suffer, would be defeated and removed by the 'beauty' and perfection of Christ.

'Remember' is a wonderful devotional book that is a significant legacy that will help many people. It is an encouragement to those of us who knew Rhonda and, who also trust in Christ, to realise that Christ's victory is now Rhonda's victory too.