Apologetics of the heart 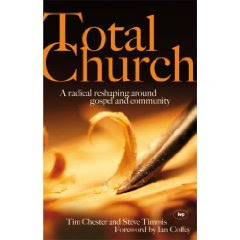 Tim Chester & Steve Timmis have an interesting chapter on apologetics in their book ‘Total Church: A radical reshaping around gospel and community’ (IVP, 2007, pp159-175) in which they argue for ‘apologetics of the heart’ not just apologetics of the head. They argue that there is always a limit to rational apologetics. This quote from the chapter pretty much sums up their position:

Before commenting on the quote I would want to stress that there is never a limit to anything for our sovereign God. I continue to be amazed at how God can use any person, adopting any strategy, at any level of proficiency, in any situation, to reveal the truth of the gospel. But Chester and Timmis are making the point that as we seek to build strong effective gospel-centred churches and people, that we should not see the sharing of the biblical truth of the gospel simply as rational argument. This sits well with the overall theme of the book that challenges churches to see that the local church (and Christian practice in general) as gospel-centred in the sense of being word-centred, mission-centred and community-centred. They make some fundamental points in arriving at their position:


The value of relational apologetics

Chester and Timmis argue for greater attention to relational apologetics rather than simply rational apologetics. While not denying (or even downgrading) the importance of knowledge, they argue for greater attention to the building of better relationships with each other (as John argues in John 13), as we seek to build better relationships with our wider family, friends and community. They argue that just as the story of Israel was one of the nations drawing the nations to God, so too the Christian community should draw others to the gospel and that (in quoting Francis Schaeffer), “Christian community is the ultimate apologetic”.

For me (as CASE demonstrates), it is all about balancing the relational and the rational. It is not one or the other. We know that the Bible calls us to reason with others as Paul demonstrates (e.g. Acts 17), even with strangers. But likewise we are called to live such godly lives among people that they see our deeds to the glory of God (1 Peter 2:4-12).

The Christian community in all its forms (e.g. church, family, Bible study etc) should be seeking to glorify God and to be used by him to draw others to the gospel, relationally as well as through rational argument.

Chester and Timmis complete their chapter with these words:

“We have a better story than any of the alternatives. We need to awaken a desire for God. We need to make people want Christianity to be true. Then we may be able to persuade them that it is true.”

While I find this to be a helpful summation, I want to quibble with them over the use of words here and in other places in the chapter, and how their use of words can give a wrong impression of God’s sovereignty. While agreeing with them that we need balance between rational and relational apologetics, we must always recognise that ultimately “we” do little and don’t “make” things happen - God reveals himself in Christ through his word by his Spirit. While I think my difference with them on this point is more about the language they use, rather than their acceptance of God’s sovereignty (after all the authors argue this very position in chapter 1 of the book), I want to caution against losing sight of this fundamental truth as we rightly seek a more balance approach to our apologetics. As I said at the beginning of this post God can use any person, adopting any strategy, at any level of proficiency, in any situation, to reveal the truth of the gospel. Of course, this is not a reason for Christians to sit back and do nothing, to place no priority on loving others to the glory of God, to build strong Christian communities centred on the gospel, or to fail to share the gospel through words and deeds. Chester and Timmis offer some good advice as an antidote to this type of Christian and church ineffectiveness.

You can find more details on the book here (USA) and here (UK).
For more information on "The Crowded House" and Tim Chester and Steve Timmis click here.