Apologetics and the university 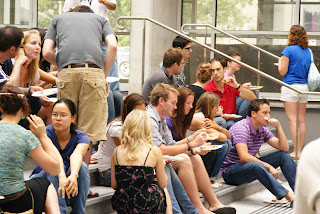 It won't surprise readers of this blog to hear that I believe universities are a key place for apologetics to be practised. At CASE we embrace and support apologetics in its varied forms. In its broadest sense, apologetics is concerned with giving a reason for one's faith. Often, this is due to a need to defend the faith (although apologetics doesn't have to be simply defensive) against various charges of biblical inaccuracy, inconsistency in our claims, challenges of application (e.g. If God does exist then how come....?) etc. The university is a place where ideas are shared and people challenged to consider truth claims and university students are typically people who want to know and who are keen to explore new ideas.

That's why CASE is situated within New College, that's also why New College was built in the 1960s and why we've just built a new building (the New College Village) as home to a postgraduate community at the University of New South Wales (Sydney). That's also why Issue #20 of Case magazine will explore the forms that 'Apologetics' takes.

Universities have served as key sites for debate and dialogue about matters of faith for over 800 years. When William Lane Craig spoke at the European Leaders Conference in 2002 he offered the following comment in support of the key place of universities for apologetics:

I hold a personal view that in our rightful desire to challenge our brightest young men to pursue theological education and pastoral ministry, that we have effectively turned our backs on the strategic importance of the university as places for Christians to live out their faiths, and to apply a Christian worldview to their reading, writing, research, teaching and life on campus. It is ironic that at a time when we have such effective student ministry on virtually every university campus in Australia, that we have so few Christian academics giving reasons for their faith. We need more Christian academics that can bring their Christian worldview to bear on all the challenges that the world faces in the 21st century.

We have even fewer Christians on university campuses who are leaders in their fields and who actually see that their faith has relevance to what they have to say on physics, medicine, law, education, sociology, new media, economics, history and so on. Not surprisingly, there seem to be less and less Christian voices amongst the opinion makers, thought leaders and media spokespeople than ever before. As a university academic I know the challenges in applying one's faith to one's scholarship and how hard it is ensure that one's faith is not simply an adjunct to our intellectual pursuits in the academy. This is the greatest challenge that those who are academics on campus face. But what is clear, is that Christian voices do need to be heard on campus not just from the student body and from the visiting Christian staff workers, but from university academics who teach our students and whose views potentially shape how they view the world, how they view epistemology, what the nature of evidence is and so on. Ultimately, this is the sharp end of their preparation to at least hear and consider the claims of Christ.

In the same talk that Craig stresses the importance of a Christian worldview on our campuses he makes these comments about the way the Christian voice is sometimes heard on campuses:

"....the Gospel is never heard in isolation. It is always heard against the background of the cultural milieu in which one lives. A person raised in a cultural milieu in which Christianity is still seen as an intellectually viable option will display an openness to the Gospel which a person who is secularized will not. For the secular person you may as well tell him to believe in fairies or leprechauns as in Jesus Christ! Or, to give a more realistic illustration, it is like a devotee of the Hare Krishna movement approaching you on the street and inviting you to believe in Krishna. Such an invitation strikes us as bizarre, freakish, even amusing. But to a person on the streets of Bombay, such an invitation would, I assume, appear quite reasonable and cause for reflection. I fear that evangelicals appear almost as weird to persons on the streets of Bonn, Stockholm, or Paris as do the devotees of Krishna."

Since opening the doors of our new postgraduate community at UNSW we haven't faced quite faced the "are you weird?" reaction, but we have certainly been confronted by the challenge of defending a faith for which their is little preliminary knowledge and when the worldview of the listener is quite different from that of the Christian. With 315 residents from 55 nations (85% foreign students and just 15% Christian), we have experienced the exciting challenge of giving a reason for our faith to Muslims, Hindus, Buddhists, agnostics and atheists who have limited understanding and background to the claims of the gospel of Christ.

If you have an interesting in contributing to the next issue of Case on apologetics please contact me.

Other talks and papers by Dr Craig at BeThinking.org (here)