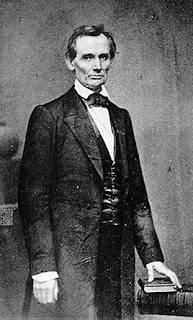 I have always admired Abraham Lincoln (1809-1865) but became more interested in him when living in the United States in 1984. Living in Indiana meant that there were a number of Lincoln memorials within close distance, including the Lincoln Boyhood National Memorial in Spencer County Indiana. As a family we visited the farm site where Lincoln lived from 1816 to 1830. While living in Bloomington Indiana we also learned that our daughter shared Lincoln's birthday. This increased our interest, especially my daughter's, who read everything she could find about him. There was one embarrassing moment at the Lincoln Memorial when as a 7 year old she corrected the tour guide in one museum about the facts of Lincoln's life (and she was correct).

It is the 200th anniversary of Lincoln's birth today (and Nicole's 32nd birthday - happy birthday Nic!). Lincoln's life demonstrated how God could use a less than perfect man to bring an end to slavery in the USA and to reunify a nation.

Lincoln is typically seen as a Christian who was used by God. However, biographers report that Lincoln's faith was paradoxical. He did not go to church, and yet, many suggest that he had a spiritual depth not matched by many of his contemporaries.

In the 'Puzzling Faith of Abraham Lincoln', Mark Noll outlines how confusing Lincoln's faith proved to people of his time. He contrasts Lincoln with the two most influential preachers of Lincoln's day. In the North there was Henry Ward Beecher (1813-1887) who was from the most prominent evangelical family. He was the pastor of Brooklyn's Plymouth Congregational Church, and had the most influential pulpit in America. In the South, Robert Lewis Dabney (1820-1898) was a Presbyterian and strong defender of the Scriptures, a man even more orthodox than Beecher. Each man was certain they understood the will of God in relation to slavery and the future of the Union. Each was convinced of the other side's guilt. Dabney saw the conflict as caused deliberately by evil abolitionists from the North who persecuted the South. In contrast Beecher, saw that the evil was perpetrated by the South, he saw "the whole guilt of this war upon the ambitious, educated, plotting leaders of the South".

And yet, God used a non-church goer to challenge the conflicting certainty of the leading preachers of his day in relation to the rights and wrongs of the conflict. Lincoln said this of his contemporaries:

"The will of God prevails. In great contests each party claims to act in accordance with the will of God. Both may be, and one must be, wrong. God can not be for and against the same thing at the same time."

In his second inaugural address of 1865, he challenged the nation with these words:

Neither [side] anticipated that the cause of the conflict [i.e., slavery] might cease with, or even before, the conflict itself should cease. Each looked for an easier triumph, and a result less fundamental and astounding. Both read the same Bible, and pray to the same God; and each invokes His aid against the other. It may seem strange that any men should dare to ask a just God's assistance in wringing their bread from the sweat of other men's faces; but let us judge not that we be not judged. The prayers of both could not be answered; that of neither has been answered fully. The Almighty has His own purposes. 'Woe unto the world because of offences! For it must needs be that offences come; but woe to that man by whom the offence cometh! [Matthew 18:7]' If we shall suppose that American Slavery is one of those offences which, in the providence of God, must needs come, but which, having continued through His appointed time, He now wills to remove, and that He gives to both North and South this terrible war as the woe due to those by whom the offence came, shall we discern therein any departure from those divine attributes which the believers in a Living God always ascribe to Him? Fondly do we hope—fervently do we pray—that this mighty scourge of war may speedily pass away. Yet, if God wills that it continue, until all the wealth piled by the bondman's two hundred and fifty years of unrequited toil shall be sunk, and until every drop of blood drawn with the lash, shall be paid by another drawn with the sword, as was said three thousand years ago, so still it must be said, 'the judgments of the Lord are true and righteous altogether. [Psalm 19:9]'

When reflecting on his speech just days later he commented:

"Men are not flattered by being shown that there has been a difference of purpose between the Almighty and them...to deny it, however, in this case, is to deny that there is a God governing the world. It is a truth which I thought needed to be told. . . .”

Irrespective of just how deep was his faith, and where he stood theologically on many things, Lincoln seemed to have had a good grasp of sin and man's need of redemption, and an understanding that God is sovereign and will work out his purposes for his people through whoever he chooses. Lincoln eventually gave his life in the service of God's purposes. On the 14th of April 1865, just five days after Robert E. Lee's surrender at Appomattox Court House, Lincoln was assassinated while attending a performance at Ford's Theatre in Washington. He died the next day at 7.22am.

I praise God for Lincoln's life which began on this day 200 years ago.