A review of Children's Bible Apps 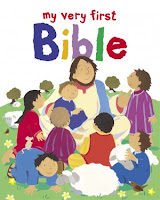 There are many Children's Bibles available for use with children aged from 1 to 12 years in traditional book format. I have used many examples with my own children (a while ago now!), my grandchildren and other people's children at Sunday school. I have found many of the Lion Bibles useful, including 'My Very First Bible' (1-4 years), 'The Lion First Bible' (5-8 years) and the 'Day-By-Day Bible' (9-12 years). All are well illustrated and offer a sampling of Old and New Testament Scripture that seek to present the overall biblical story of God and his plan for the salvation of his people through Christ. They use shortened descriptions that are faithful to the texts on which they are based. I have also used The Jesus Storybook Bible by Sally Lloyd-Jones that offers a more literary and creative narrative approach to the Bible, but always seeking to reinforce key Scriptural themes. As well, I have also used The Beginner's Bible that is also excellent and is designed for children aged 2-3 years.  My daughter has written an excellent post on children's Bibles and resources on her blog 168 Hours (here), which offers additional information.

The way I judge the quality of any children's Bible is straightforward:

Does the selection of stories and Bible content offer a consistent and accurate narrative that teaches children about God, our relationship to him, and his plan of salvation in Christ and what this means for their lives?
Is it written in appropriate language that communicates the message of Scripture?
Does it adequately communicate the important themes of Scripture story by story, or section by section and avoid selectivity that distorts?
Is it illustrated well and in a way that is engaging and helpful for children in communicating the above?
Do they help parents to introduce the message of the Bible to their children and for older children; does it help to develop habits of daily Bible reading and study?

As yet, there have been relatively few attempts to turn children's Bible stories into apps for iPad, iPhone or Android devices. Some of the early examples are a little mixed in quality and generally leave me wondering why they would bother. I have to confess, that I struggle to see how app versions offer many more possibilities than book versions. Having said this, some adults and children will want to use them, and there certainly appears to be a market for them. App versions of children's Bibles should be able to satisfy all of the above criteria that I use to judge quality as well as two more:

Does the various app features increase engagement with the biblical story or distract from it?
Is the app easy to use for children and parents?

Pretty much all of the early attempts to turn the Bible into apps fail in one way or another. Some fail on many fronts. 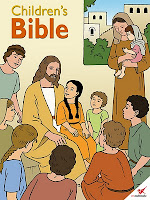 'Children's Bible' by Barcelona Media presents the Bible in comic format with a new story each week. You can download a free comic and then purchase additional copies. Some children will enjoy the comic format but they offer little more than traditional story forms, and while suitable for independent reading for children aged 6-10 are bigger on style and format than attention to content.

Christful Apps has also produced a number of apps that present separate Bible stories in varied formats, including 'Baby Jesus'  'Jonah', 'Easter Story'  'The Beginning - Let There be Light' and 'Adam and Eve'. I sampled the 'Easter Story' from the Christful collection and was a little disappointed. My primary concerns were that the language of translation was at times limited and repetitive, and the translation left out elements of the Easter story and in doing so inaccurately presented it (e.g. the sequence of Jesus' appearance to his followers after his resurrection). As well, the app features some limited movement of parts of the generally static images that were basic and in places almost comical (e.g. Jesus' ascension) due to the artificial and one-dimensional nature of the movement.

The work being done by Copenhagen Publishing House is the best of what I have reviewed so far and I would encourage them to keep improving what they have achieved so far. There seems to have been progress in this publisher's work over their successive efforts and desire to present the Bible faithfully. While I don't think they have succeeded in some of the choices they have made with text, the examples I looked at had many good qualities. I will comment on two separate apps.

'My First Bible Stories' is a collection of favourite Bible stories for children aged 3 and up (probably 5 or 6 years would be the top of the range). The stories are well illustrated and have appropriate well-written texts.  You can download the first story free ('Noah and the Ark') and then you can add the other stories by simply scrolling through camera screen to the other stories. One problem with this is that it makes it much too easy for children to simply download more stories if the owner of the device is logged in to iTunes. The stories include:

The apps have three different recording options, with a delightful 'default' voice reading. As well, the child can read and record their own voice or have their parents or others record the stories.  You can also turn the voice off allowing the stories to be read with the child. I haven't had time to read every story closely but I was a little frustrated when sampling 'Adam and Eve and the story of The Creation' to find a few examples of 'loose' translation. One example is the presentation of Eve to Adam as his 'partner' rather than the biblically more accurate translation of 'helper'. There were other examples where the text in its selectivity of biblical content (as it must be for kids) left out key elements of the story. The most dramatic example is the failure of the text to mention the sin of Adam and Eve in the Garden.

The story ends with Adam and Eve being  'happy together':

'[T]hey loved each other and did not have to worry about anything. They had plenty of food and did not have to fear bad things for there was nothing bad. And the best thing was that late in the afternoon as the day cooled God came and they walked with God in the garden. God had now finished creating everything. So, on day seven God did not create anything. Instead God rested and enjoyed everything He had created in six days. God looked at all He had made and said, "It is very good. Everything is just perfect".'

While the developers might argue that they have just presented the creation story to the point at which Eve is made, leaving out the end of the story in the garden, fails to meet my criteria for a good children's Bible. It is hardly a satisfactory end to the story; the entry of sin into the world through Adam and Eve is obviously a key plank in the Bible's story of God's rebellious people.

The app is also a little annoying in that it is hard to navigate back and forward. For example, when you reach the last page it takes you back to the beginning with no ability to move backwards once you leave the last page. 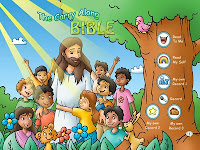 'Toddler Bible - The Carry Along Bible'

This second app from Copenhagen Publishing House has overcome all of my frustrations with navigation that I experienced with the first app. It incorporates a range of additional features, including clear buttons at the front end for the varied options of 'Read to me', 'Read My Self', 'Record' (with 3 buttons for different versions)'. There is also an up front information button, a menu, a clear 'Home' button on every page and a more sophisticated page turn (though the page turn noise annoyed me).

The app also incorporates sound effects throughout, and some level of animation on every page (mainly movement of characters etc).  The text is also a little more faithful to the Scripture but again it leaves out some key bits. For example, the Bible ends with the ascension of Jesus with no mention of his ultimate return and the judgement to come, nor a clear articulation of our responsibility to repent and believe. It is possible to present a short version of the message of the Bible with all key elements of the biblical narrative present. I'd encourage the developers to keep working at this. We need to avoid assuming that children aren't ready for the tough bits. My daughter reported a delightful example of my eldest grandson picking up an error in a children's Bible aged six (here) that shows that kids can understand all elements of the Bible's key message. If children are being well taught about the message of the Bible they will begin to see the inconsistencies for themselves, but some children won't. I'd hope that a good children's Bible would actually reinforce the key elements of God's plan of salvation for the children as well as the parents as they share it with their children.

I'd encourage all developers of children's Bible apps to spend a lot of time thinking about the way biblical content is presented accurately. It actually needs to be given at least equal priority to the useability and attractiveness of the app. While some of the earliest attempts simply present existing children's Bibles to apps, using the most accurate text is a priority.

Other Posts on Children's Bibles