This post is for anyone who ever has to write a paper or publication that requires references, or who wants an easy way to save book bibliographic information.  A new smartphone application makes it very easy to cite books. 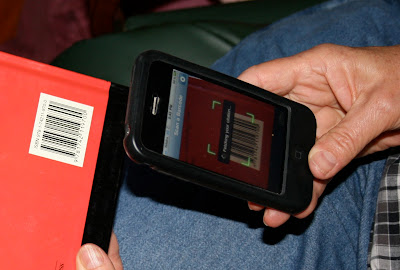 The app is called 'Quick Cite' and costs 99 cents. It is available for iPhones and Android-based phones. The phone needs to have an inbuilt camera. For the iPhone all you need to do is point the phone at the bar code on the back of a book and once the camera locks in on the code it takes a photo, creates the bibliographic reference and emails it to you in one of four citation styles—APA, MLA, Chicago, or IEEE. You can choose the style you want and the email address to receive the reference.

The app was developed by a team of seven Canadian students who tried to develop seven apps in seven days at the University of Waterloo. They called their project 'Seven Cubed'. Quick Cite took them eight hours to develop.

The app has a couple of minor drawbacks.  First, the use of barcodes only became standard publishing practice in the 1970s, but most of the books we usually cite will have barcodes. Second, it doesn't seem to work that well with literature and some non-fiction books, particularly if they are more than 10 years old. In the case of children's literature, the barcodes often don't lead to a citation. A third minor glitch is that sometimes the place of publication is missing. Hopefully, the developers will iron out these problems, but they may just reflect issues with barcode use, particularly for older books. 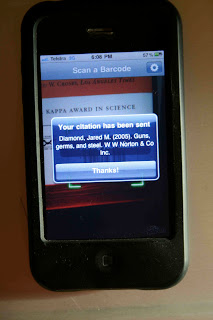 The many uses for the app should be obvious. Students and academics can quickly scan the barcode and have the full citation in seconds ready to be copied and dropped into a publication.  As well, it is a perfect way to record the details of books used in libraries, new books seen at bookshops and so on.

At 99 cents this is amazing value. I've already been putting the app to good use. Now any time I see an interesting book I can scan the citation details in an instant.

You can buy the app via iTunes HERE.